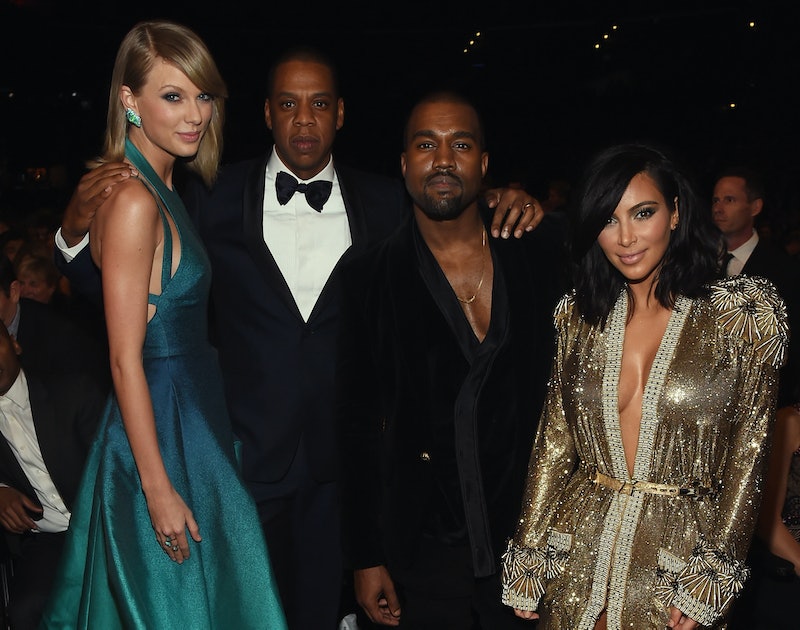 With all the recent relationship drama, it's hard out there for a Taylor Swift fan these days — and even harder if you love Swift and Kim Kardashian. After Kanye West name dropped Swift in his song, "Famous," she hasn't been too thrilled with him, and can you blame her? But apparently, there's another side of the story, and even though Kim opened up about it in her interview with GQ , she's about to get even more in depth. On this week's episode of Keeping Up With The Kardashians, Kim explains her beef with Taylor Swift, and it definitely doesn't sound like it's getting any better.

Back when this episode was filmed, Kanye was filming his controversial video for "Famous," which included nude likenesses of different celebrities, including Swift. Kim filled her mom and Scott in on the video's release (and the fact that Caitlyn Jenner was included, too) and that led to Scott wanting to know what the deal with Swift being mad at West was. According to Kim, Kanye called Swift and asked her for her blessing, and at the time, she allegedly agreed, and then later flipped the script. They reportedly have recordings of her allegedly being cool with it over the phone, and because of that, Kim's mad that she and Kanye have been made to be villains. Swift has another side of the story however, and posted a full statement on Instagram after Kim released the video on Snapchat.

But wait: There's more! While getting ready for a video shoot, Kim gets a call and finds out that someone has a recording of Kanye venting about Swift and could end up releasing it — aka his famous Saturday Night Live rant. Kanye doesn't care if it gets out, but Kim stresses out about how he'll be perceived, and the whole thing sounds like a giant mess.

Later in the episode, Khloe and Kourtney actually watch the recording of Swift, although the video and audio aren't shown on TV. Khloe's upset in defense of her sister, but Kim decides to leave it at her GQ interview. The feud between Swift, Kim, and Kanye may never be resolved, but now, both sides of the story are out there. As for me? I'm not picking a team. I want Swift and Kim to be my besties.... but maybe I won't invite them to hang out at the same time.

More like this
Taylor Swift & Her Mom Clap Back Against The “Shake It Off” Plagiarism Lawsuit
By Jake Viswanath
Sophie Turner & Joe Jonas’ Fave Taylor Swift Album Is Full Of “Bangers”
By Sam Ramsden
Dane Cook Is Engaged To Kelsi Taylor After Dating For 5 Years
By Danielle Jackson and Radhika Menon
Lauv Is No Stranger To Taylor Swift, Drake, Ed Sheeran, & Fame
By Alyssa Lapid
Get Even More From Bustle — Sign Up For The Newsletter