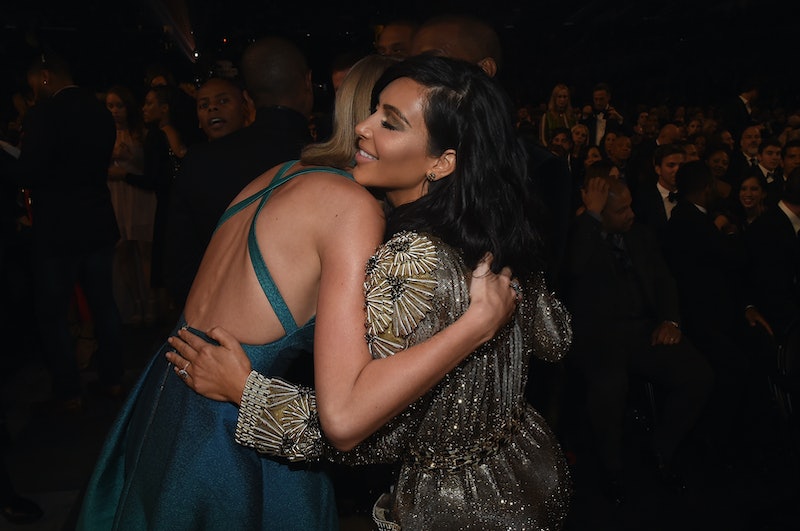 Well, it happened. Only a month after claiming that this conversation took place in her June GQ cover story, Kim Kardashian shared video of Kanye West and Taylor Swift's call about his The Life of Pablo song, "Famous," on her Snapchat for the world to see. Though the name or contact number on the phone is blurred in the video, Swift acknowledged the videos with a statement on her Instagram confirming the phone call did indeed take place (but that she was allegedly not aware of everything the song said), so it seems pretty safe to say it was definitely her. Of course, though, as with any celebrity feud, things are much more complicated than they seem.

It all began late Sunday night, when Kardashian shared on her Twitter that she was uploading something... very interesting to her Snapchat. In fact, she was vaguer than that, because she's Kim Kardashian and she can get away with being as vague as she wants. "Do u guys follow me on snap chat? u really should ;-) [sic]," she tweeted. One look at her Snapchat, and the reason for that becomes clear: A series of videos depicting West speaking to Swift were being unapologetically uploaded in rapid succession — no captions, no filters, no nothing. The conversation includes West clearly stating two lyrics from "Famous":

West: For all my south side n****s that know me best, feel like me and Taylor might still have sex.

West: Oh, well, this one is, uh — I think this is a really cool thing to have.

Swift: I know! I mean it's like a compliment kind of.

West: What I give a f*ck about is just you as a person, and as a friend.

Then, West is seen stating that his priority is preserving relationships, because "I want things that make you feel good. I don't wanna do rap that makes people feel bad." Swift is heard responding: "I mean, go with whatever line you think is better. It's obviously very tongue in cheek either way. And I really appreciate you telling me about it, that's really nice!"

Swift goes on to thank West for giving her a heads up about the line, and also for flowers he sent to her — "I Instagrammed a picture of them and it's the most Instagram likes I've ever gotten." Then, the following exchange takes place:

Swift: Yeah. I mean, I don't think anybody would listen to that and be like, Oh, that's a real diss. Like, she must be crying about […] You gotta tell the story the way that it happened to you and the way you experienced it. Like you obviously didn't know who I was before that. It doesn't matter if I sold 7 million of that album before you did that, which is what happened. You didn't know who I was before that [...] And, like, I'm always gonna respect you [...] And I'm really glad you had the respect to call me that and tell me that as a friend, about the song. It's just a really cool thing to do, and a really good show of friendship. So thank you.

West: Thank you too.

That's not even all, either:

Swift: And you know, if people ask me about it, I think it would be great for me to be like, Look, he called me and told me about the line before it came out. Like, joke's on you guys, we're fine [...] You guys wanna call this a feud, you wanna call this throwing shade. But right after the song comes out I'm gonna be on a Grammy red carpet and they're gonna ask me about it and I'm gonna be like, he called me. […] awesome that you're so outspoken and it's gonna be like, Yeah, she does, it made her famous! It's more provocative to say, 'Might still have sex.'"

Shortly after Kardashian shared the Snapchats, Twitter exploded. A hashtag, "#KimExposedTaylorParty" began trending, as did "Kim's Snapchat." If you're anyone remotely interested in pop culture, I'd place a bet on guessing your Twitter timeline included at least one user making a joke about the situation. It didn't take long for Swift to chime in with her own statement, which came shortly after 12:14 a.m. EST:

Swift's statement about not being aware of the term "b*tch" being used in the song — which includes the lyrics, "I feel like me and Taylor might still have sex/ Why? I made that b*tch famous," — echoes previous statements from her publicists about it. In a statement released after West tweeted that he had "called Taylor and had a hour long convo with her about the line," and then claimed, "[Swift] thought it was funny and gave her blessings," Swift's reps said: "Kanye did not call for approval, but to ask Taylor to release his single ‘Famous’ on her Twitter account. She declined and cautioned him about releasing a song with such a strong misogynistic message. Taylor was never made aware of the actual lyric, 'I made that b*tch famous.'"

Sure enough, in the series of videos Kardashian shared on her Snapchat, West is not seen actually stating the word "b*tch" — though parts of the recording are clearly left out in the Snap story. He's only seen saying, "I feel like me and Taylor might still have sex." Later in the conversation, Swift does echo the "famous" bit — when she says "right after the song comes out, I'm gonna be on a Grammy red carpet and they're gonna ask me about it, and I'm gonna be like, ‘he called me.’ It's awesome that you're so outspoken and it's gonna be like, ‘yeah, she does, it made her famous!'" — but she doesn't make any indication that the word b*tch was communicated to her, and it's definitely not right to speculate whether or not she did.

Of course, though this situation is very much a he said-she said, it's still big, big deal. We first heard of the possibility of this recording existing only a month ago: Kardashian claimed in a GQ magazine interview that Swift had received a call from West about the song, and that the 26-year-old singer had allegedly given it her approval. What's more, she also claimed she had filmed the conversation taking place.

"[Swift] totally approved that. She totally knew that that was coming out. She wanted to all of a sudden act like she didn't. I swear, my husband gets so much sh*t for things [when] he really was doing proper protocol and even called to get it approved... what rapper would call a girl that he was rapping a line about to get approval?" ... "It was funny because [on the call with West, Swift] said, ‘When I get on the Grammy red carpet, all the media is going to think that I'm so against this, and I'll just laugh and say, ‘The joke's on you, guys. I was in on it the whole time.’ And I'm like, wait, but [in] your Grammy speech, you completely dissed my husband just to play the victim again."

Like they did after West's tweets, Swift's team promptly released statements denying that the conversation took place as Kardashian was claiming. After Kardashian's GQ interview was completed, GQ reached out to Swift's reps regarding Kardashian's claims, specifically asking if Swift was aware Kardashian had filmed any such conversation. Swift's team responded with the following, according to GQ:

Taylor does not hold anything against Kim Kardashian as she recognizes the pressure Kim must be under and that she is only repeating what she has been told by Kanye West. However, that does not change the fact that much of what Kim is saying is incorrect. Kanye West and Taylor only spoke once on the phone while she was on vacation with her family in January of 2016 and they have never spoken since. Taylor has never denied that conversation took place. It was on that phone call that Kanye West also asked her to release the song on her Twitter account, which she declined to do. Kanye West never told Taylor he was going to use the term ‘that bitch’ in referencing her. A song cannot be approved if it was never heard. Kanye West never played the song for Taylor Swift. Taylor heard it for the first time when everyone else did and was humiliated. Kim Kardashian's claim that Taylor and her team were aware of being recorded is not true, and Taylor cannot understand why Kanye West, and now Kim Kardashian, will not just leave her alone.

Now, with Kardashian having released the conversation and Swift admitting it was her in the video, it's not clear what's going to happen in the ongoing Kardashian/Swift/West saga. Those close to Swift have already begun speaking out: Swift's close friend, Selena Gomez, tweeted a series of statements that seemed to be responses to the situation.

Bustle has reached out to Kardashian, West, and Swift's reps in response to the recording being released. Kardashian and West's reps have not yet responded, while Swift's rep referred to Swift's Instagram statement.