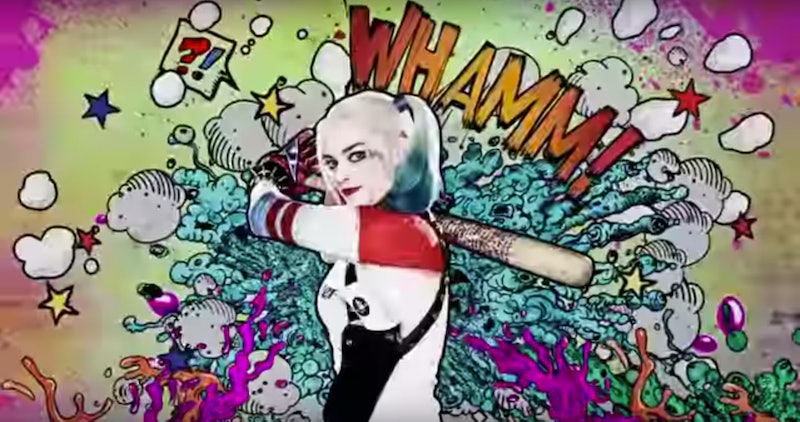 As if the glimpses of the fascinating ensemble cast with their spooky vibes wasn't enough for us all in the trailers, Suicide Squad has new short promo videos for each character. These promo videos happen to be totally and completely perfect — and maybe just a tad overwhelming. There are 11 character-based 20-second long shorts, which feature a catchphrase, some fun animation, some action shots, a little background info, and "Ballroom Blitz." Think of them as like video baseball cards. These promos make the release date of Suicide Squad (August 5, yay!) seem oh so far away, and yet achingly close.

Ten characters in one movie is a lot to keep up with, but these promos help fans to sort through everyone. The deeper look at some of the characters we are just beginning to get to know is the perfect window into this so far pretty secretive movie. For example, all we know about the official Big Bad (difficult to weed through in a movie with an all-villain cast) from the official plot synopsis is that the Squad is on a "mission to defeat an enigmatic, insuperable entity."

But, thanks to these promos, it will be a tad easier to break everyone down and get more excited about them. Let's get to business, shall we?

In the DC world, Enchantress was a simple actress/model named June who was just looking for some entertainment, but then got herself turned into an evil sorceress. It's very possible that she is the above-mentioned "enigmatic, insuperable entity" mainly because, in this short, we see her in some head dress garb with some major magic-green eye going on. Something wicked is definitely coming this way with Enchantress.

With her quote "we're bad guys it's what we do" and the caption that she is a "wild card," we can assume the Joker's sidekick/girlfriend is going to go rogue. All I can say is her bubble gum chewing-don't give a f*ck attitude's got me shaking with anticipation.

3. The Joker, Played By Jared Leto

It's not clear where the Joker's allegiances lie even with this promo. What is clear is that Jared Leto is going to be a chilling Joker, perhaps as good as Joker's past, Heath Ledger and Jack Nicholson.

Silent but deadly. He doesn't talk in the promo, but he's marked as an assassin. Which sounds good, because with all those big talkers in the group causing a scene like the Joker and Harley Quinn, it will be nice to have a silent guy who can kill the enemy easily.

We already know Viola Davis can play an ice queen, as shown by her work in How To Get Away With Murder. In this promo, we get to see Waller, who's just officially a government official, firing a weapon. So it seems she's going to be involved in something she might not be that comfortable with, which is exciting.

Based on this fiery dude's promo, he's the one with the highest threshold for pain — that's a lot of tattoos. Also, his fire power is definitely something to not be taken lightly; apparently the true extent of his powers is "unknown." Yikes.

Judging by Katana's opening statement, which translates to "criminals deserve no mercy," she might have a bit of a tough time with her crew of convicts. In DC lore, Katana is one of the good guys. She's an assassin, but in the past she's killed all the right people, or wrong people as it were. I wonder how her morals are going to handle this whole thing.

This Aussie assassin is chugging a beer in the final shot of the promo, so you just know he's gonna be a fun time. After seeing how terrifying Jared Leto looks, I'm ready for the comic relief.

Every dream team's got to have a straight-laced army man trying to keep it all together. Even a "natural born leader" who "bleeds red, white and blue" makes mistakes, and I think making this guy seem so put together in this promo is a definite trap.

This is the first ever live action version of Killer Croc, a guy with a skin condition who works as a crony to the Penguin in the DC version. How is Suicide Squad going to portray this born sidekick? So far, I'm getting a lot of skulls, but will he seem like a well-developed character? Only time will tell.

10. Deadshot, Played By Will Smith

Will Smith's all reverse pep talky with his, "Don't forget, we're the bad guys." And it's like Will Smith you saved us from aliens. You can't be a bad guy. I just don't know how to feel.

The promos did exactly what they are supposed to do. Consider yours truly amped for what's to come with Suicide Squad.