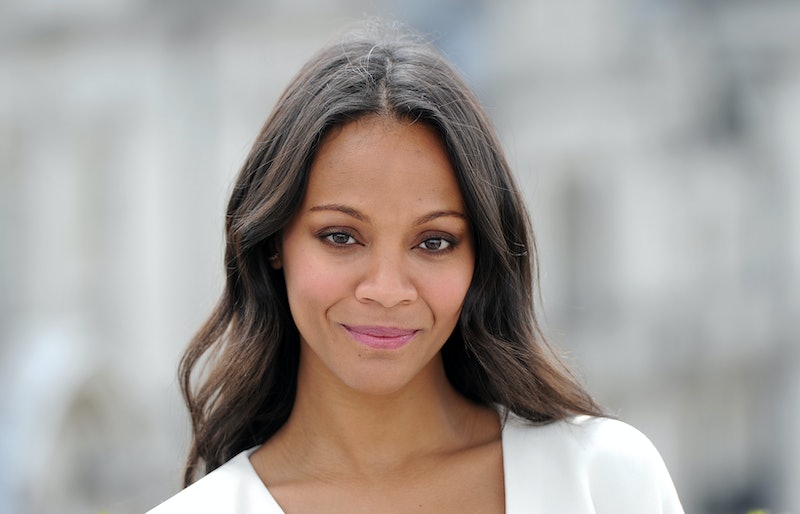 At the Los Angeles press conference for Star Trek Beyond, Zoe Saldana is the only woman on a panel of the film's actors and filmmakers. Yes, it's a male-dominated movie — as many intergalactic adventure tales are — but when a question is (finally) directed towards Saldana, it's about her character Lieutenant Uhura's romantic relationship with Spock — you know, that pointy-eared dude. While the men are probed about fight sequences, their emotional arcs, adventures off the Enterprise, and more, the lone female is asked about her romance with one of the leading males, and it's entirely disappointing.

When I sit down with Saldana a few minutes later in a hotel room at the Four Seasons Beverly Hills, I address the disparity between women and men present at the conference. "When you do an ensemble piece, you can only give a certain amount of time to the characters, and those characters are predominantly male," Saldana reasons. "I'm not bitter about it. I recognize it."

Saldana has made a career for herself playing female characters in space. Aside from the Star Trek franchise, the 38-year-old actor portrays Gamora in the wildly popular Guardians of the Galaxy, as well as Neytiri in James Cameron's Avatar franchise, which has three sequels in the works. The mother of two has been quoted saying that it's "better for women in space" — but is this really true?

"As women, we have to support each other ... we have to be the ones to make those stories [about women] a blockbuster hit."

"Even in space, it's, 'Oh, I'm just going to stand here all day while the guys have all the funny lines?'" she says. "It's tiring and boring. It's so one dimensional."

And it's hard not to agree. All of Saldana's other worldly franchises boast significantly more male roles than female. And while the actor assures that she works with, "amazing, caring, awesome dudes," she also admits: "It feels lonely. In my twenties, it was easier for me to feel like I was the only girl in a [room], but in reality, once I sat there for 90 days on set in a overcrowded male environment, I felt underrepresented. I felt not heard enough. I felt vulnerable."

Yet Star Trek itself is not the problem. The franchise has been a beacon of diversity in many ways — the original series had an African American female lead as well as many men of color in the main cast. And in 2016's Star Trek Beyond, the film series introduces its first openly gay character, Sulu. The film also added new female characters to the cast: Sofia Boutella and Lydia Wilson, who both play strong, layered characters.

It's clear that gender gaps in cinema cannot be blamed on any one film, as it is an industry-wide problem. Though in 2016 this problem seems obvious, the facts warrant repeating: According to the Center for the Study of Women in Television in Film, in 2015, females comprised 22 percent of protagonists, and made up only 33 percent of all speaking characters in the top 100 domestic grossing films. The center also states that "female characters of color were less likely than white females to be major characters."

This lack of representation is no surprise to Saldana, and she addresses it head on: "When you're born, and if you have a vagina, your life is limited," she says. "As women, we have to support each other. If Meryl Streep does a movie, if Jessica Chastain does a movie, if Gugu [Mbatha-Raw] does a movie — especially if she's the lead and we see the story through her eyes — we have to be the ones to make those stories a blockbuster hit. If a movie is over-saturated with masculinity, and being gratuitous with the female characters in it, we have to not go see that movie."

According to the actor, movie-goers vote with their dollars. And if we, as an audience, want to see change in who is represented in film, we need to support diverse, female-driven pictures. She says:

Studios don't sit down, men don't sit down and say, 'How are we going to f*ck women today? How are we going to keep women from getting what they want and what is rightfully theirs?' No, they are looking at their numbers. They have to answer to investors. If we want to see some blonde guy be all lubed up, and make love to a woman, and never cry in front of the camera, then we'll [miss] Meryl, who was right across the hall with Ricky and the Flash. Why didn't we go there? We have to take responsibility and acknowledge the power that we have as movie goers. We're the ones that have the true power, and our numbers are what dictates what these studios are going to want to move forward with. It's all tied together.

But movie-goers aren't the only ones with an opportunity to create tangible change. She implores herself, as well as fellow filmmakers and actors, to make healthy decisions when casting films and accepting roles. "As artists, we're in a very responsible position. We are the true historians of time. So if we are making films, what is it we want to leave behind for females to follow?" she says. "Speak up. The one thing I've learned in my experience is that whenever I've spoken up about how I truly feel about something, I've hardly ever been received with ill emotion. If anything it's, 'Oh, I didn't think about it that way.' And then it's, 'I'm so glad I compelled you to entertain it from this angle.'"

"I'm going to make better choices in my career, in choosing roles I want women to follow."

Our conversation has gone over the scheduled time allotted, and even as a publicist encourages us to wrap it up, Saldana is adamant in her cause. "I don't like to sit and mope. I like to get up and make changes. We have to bring more equality for women into the workforce, and in our communities, and in culture. We have to raise better men. We have to be the creators of positions of power that will then in turn create better opportunities for women," she says, and leaves me with this promise: "I'm going to make better choices in my career, in choosing roles I want women to follow."

Saldana's passion is palpable, and as I get up to leave our interview, she apologies, unnecessarily, for "rambling." But Saldana's rambling is exactly what the industry needs. If her rambling continues, and if other actors ramble with her, perhaps we'll see more than one woman sitting on a panel for the next Star Trek film.