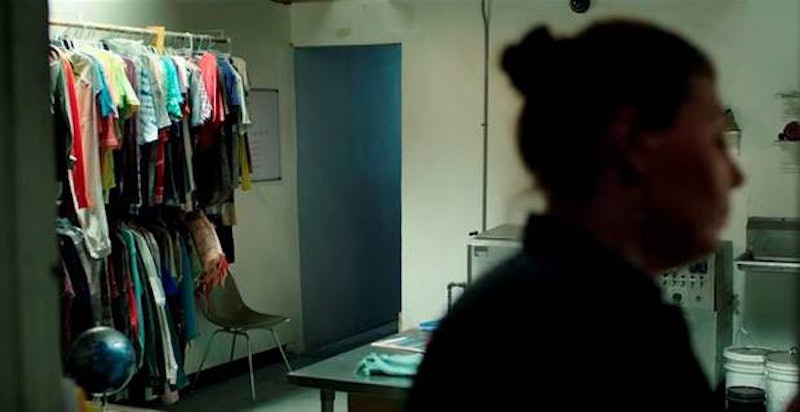 When the viral video first became a thing, I was in an exclusive relationship with "Shoes," the DIY music video starring Kelly and her passion for fashion which celebrated its decade anniversary this year. While all of my friends and I took to calling each other "betch" and watching the video religiously after school, other folks made more productive uses of their time and harnessed the power of the viral video for more lucrative ends. Case and point: David F. Sandberg, the mind behind the new, full-length horror film Lights Out, began his career in horror with a three-minute viral video of the same name. And while Lights Out isn't based on a true story, the story of its filmmaker is pretty darn cool on its own.

You might recall the original Lights Out video, which won a ton of awards in 2014. The premise is simple: a woman is home alone (duh) and shuts off her hallway light, only to see a figure silhouetted down the hallway. She flips the light on; the figure vanishes. Lights off, and the shadow shows up again. It's basically the stuff of nightmares: a monster who thrives off of the darkness. The short sent Sandberg's career soaring and got him in touch the guys behind Saw — James Wan and crew — who turned the short into a feature film debuting July 22.

On finding surprise success with this film, Sandberg's wife and leading lady Lotta Leston told Racket House that they were shocked by what happened next. “The first [big name] to contact us was a horror festival in Scotland and I remember thinking wow this huge!" she said. The couple went from making short horror films in their living room to writing, producing, and starring in their own blockbuster.

Their first film, Cam Closer, is equally scary and deserves a second watch as the new movie comes out. This one tells the story of a smartphone with a very strange special feature. Trust me, it's really good and probably NSFW.

The same goes for Attic Panic, another terrifying short that clocks in under the length of one Britney Spears song. It's an amazing testament to what can happen when folks have access to the tools necessary to create their own media. In the meantime, here's hoping that Sandberg has a successful run with his first big-time movie.