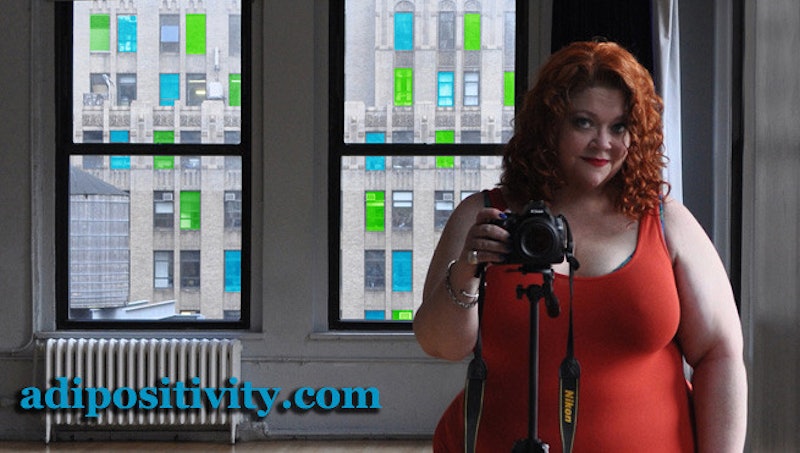 This week might have marked Fat Tuesday, but every day is a fat day for me, and that’s OK! Working through my issues with my body is something that I’ve written a lot about here at Bustle, and I think it’s important to highlight a few of the rad fat women that have been so beneficial to me on this journey.

If you’re not already following fat-positive bloggers and activists, you absolutely should be. We would all stand to see more positive messages that reinforce that fat bodies are beautiful, capable, and just as deserving of respect from other people. Get a start by following these amazing writers and activists on Twitter and Tumblr.

Marilyn Wann is one of the fat positivity movement’s most powerful forces. Wann’s book FAT?SO! helped me (and countless other fat people) recognize that our bodies are worthy of celebration, and that it’s possible to lead a healthy, happy, fat life. As part of one fat-positive project, Wann invented the “Yay Scale!” that replaced judgey weight numbers with awesome adjectives like “adorable,” and “gorgeous.” That’s something we can all get behind.

A self-described “dancer, writer, choreographer, speaker, and fat person,” Ragen Chastain keeps a blog called Dances With Fat that covers the issues like diet culture, health, and sex as they relate to fat people. She’s also a ridiculously talented award-winning dancer who continually proves that it’s possible to be a beautiful, athletic fat person. Not that I ever had any doubts.

At Fat Body Politics, Amanda Levitt provides a comprehensive look at body positivity from all angles. Her blog features fat women of color, disabled women, queer, and trans women all looking freaking fabulous and kicking ass. As a part of the joint This Is Thin Privilege project, Levitt works to highlight the systemic privilege afforded to thin people while dispelling myths about “lazy fat people.” And she posts a lot of cute animal photos.

Though Melissa McEwan’s blog Shakesville isn’t a strictly fat-blogging space, it’s always fat-positive. Shakesville frequently covers topics like buying plus-size clothing, getting adequate medical care as a fat person, and being generally awesome in a fat body. Melissa McEwan always covers everything from what’s happening in the news to important work that other social justice bloggers are doing. She also has really cute animal photos, which seems to be a common thread among this group.

Lesley Kinzel’s work at xoJane and her blog Two Whole Cakes were probably my first introduction into fat-positivity. Kinzel brings her own brand of “self-acceptance, rampant fattery, and my unabashed weirditude to the wider population,” and I’m sure glad she decided to share it with us. She also is a really awesome crocheter and finder of cool weird stuff. Even if you aren’t into fat-positivity, Lesley Kinzel is still worth a follow.

With a name like Substantia, you already know that this lady is going to be super duper cool. Jones’ project Adipositivity shows a side of fat women that most people never see represented in the media — the naked side. Adipositivity hopes “to broaden definitions of physical beauty. Literally.” What better way to do that than with a ton of sexy photos of awesome fat babes?

FatPeopleOfColor is a project dedicated to showcasing the woefully underrepresented bodies of fat people of color. Here, you’ll find TONS of incredible fatshion and body inspiration from people of all ethnic and racial backgrounds. These aren’t the photos you’ll see in mass media, but you may see some beautiful bodies that look just like yours.