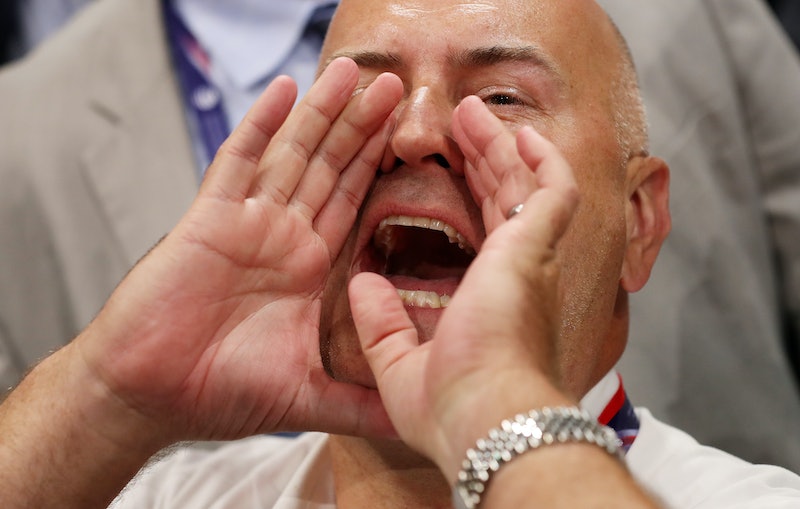 After the devastating terrorist attacks in Nice and Orlando, one might expect the fear level in America to be higher than usual this July. Donald Trump and the Republican Party are taking the opportunity to capitalize on that fear. Monday, the first day of the Republican National Convention, has been themed "Make America Safe Again" (as if there were some Golden Age of peace to which we might return). After drumming up the fear factor surrounding terrorists and immigrants, Donald Trump will tell us he's the only one who can make us safe (again).

A press release from Sunday night explained the reason for Monday's theme:

From attacks on our own soil and overseas to the tragedy in Benghazi, the policies of Barack Obama and Hillary Clinton have left us vulnerable. Our immigration system is broken, leaving our country open to security threats and the negative consequences of illegal immigration. A Donald Trump administration will listen to and learn from our nation's heroes who have put themselves in harm's way and pursue a national security strategy and foreign policy that will strengthen our military and make America safe again.

Monday's speaker line-up included a number of people whose lives were impacted by crimes committed by people in the country illegally along with Marines who were on the ground during the Benghazi attacks — a controversial topic for Democratic presumptive nominee Hillary Clinton — and other veterans (and, for some reason, Scott Baio).

Though the announcement didn't discuss the recent shootings of officers or killings of black men by officers, a moment of silence was called by Republican National Committee Chair Reince Priebus for the fallen officers. (Not surprisingly, nothing was said of the black men who died at the hands of police.)

Before you can convince Americans that you can make them safe, you must convince them that they are not. One easy way to do that is to isolate one or two groups of people (who are not like most Americans) and portray them as a dangerous enemy. It doesn't have to be true — for example, fact checks of Trump's claims that tons of undocumented immigrants are violent criminals conclude that the claims are unsubstantiated — it just has to be scary. And the more scared people are, the more likely they are to get behind sweeping proposals, like banning Muslims from entering the United States, or deporting millions of people who are in the country illegally.

According to research compiled by The Wall Street Journal, immigrants are less likely to commit violent crimes than native-born Americans. And, as the Council on Foreign Relations reported, Americans are as likely to be killed by furniture as by terrorists.

Still, many Americans believe that immigrants and Muslims (who they conflate with terrorists) are our biggest threats. And Monday's "Make America Safe Again" theme is capitalizing on that fear.