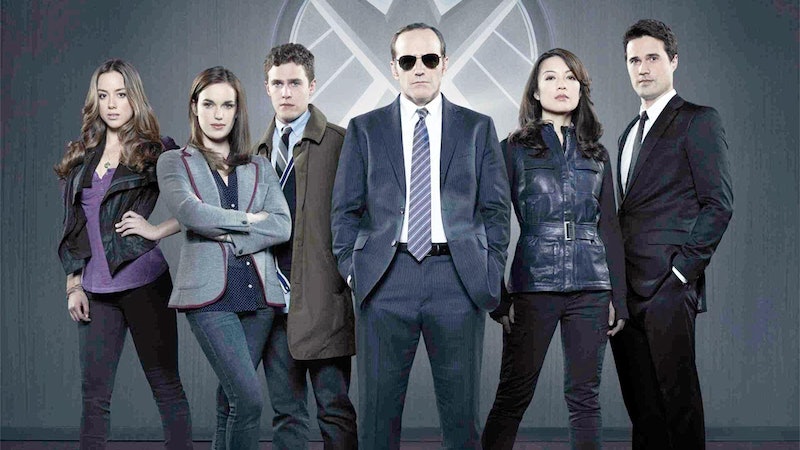 Agents of S.H.I.E.L.D. has been ramping up the excitement in recent weeks and doling out big reveals like candy. In just a few episodes, not only did some of the mysteries introduced in the beginning of the season (Who are Skye's parents? What happened in "Tahiti"?) get solved, but the show made some big reveals without even teasing them out (Skye is an 0-8-4! Ward and Melinda May are hooking up! There's a scary blue torso in "Tahiti"!). But there's still one mystery that goes unsolved: who is The Clairvoyant? He/she/it is clearly this season's Big Bad, but The Clairvoyant has yet to reveal him/her/itself. The most that we know about The Clairvoyant is that they are somehow all-knowing. So that supports two theories: either The Clairvoyant is a mole in S.H.I.E.L.D. or has some sort of supernatural power (although not telepathy, since the show has already debunked telepathy even existing in this universe). So who could it be? Here's a few theories:

It may be the Loki-mania these days, but a ton of theories point to Loki as The Clairvoyant. And many of them have reasons that actually make sense: there's been tons of Asgardian stuff on the show, Tom Hiddleston has talked to Joss Whedon about appearing on Agents of S.H.I.E.L.D., if you've seen Thor: The Dark World (spoiler alert), Loki is ruling Asgard as Odin, who has an "all-seeing" eye, and if you've seen The Avengers, you know why Loki might have something against Agent Coulson. And if he's not going to be in another Thor movie anytime soon, why not put him on Agents of S.H.I.E.L.D.? The fans clearly love him, and it would give the show a lot of great buzz.

Bill Paxton was introduced in last night's episode as Agent Garrett, another S.H.I.E.L.D. agent who goes way back with Agent Coulson and Ward. Agent Garrett also appears in the Marvel comics, and he's in sort of a moral grey area: he's worked for the good guys, but he was also previously accused of assault, battery, grand larceny, and statutory rape. The Agent Garrett we saw in last night's episode seems like a good guy, but his history in the Marvel comics alludes that he may not stay that way. Since he has a higher clearance level in the organization than Agent Coulson, he could be using S.H.I.E.L.D.'s surveillance technologies to get his intel. And if The Clairvoyant wanted to learn the secrets behind Agent Coulson's death, Garrett certainly came in at the right place and time to do that.

There are quite a few villains in the Marvel Universe that posses supernatural mental abilities. But Hulk villain The Leader not only possesses such a highly operating mental ability that he can predict the outcomes of tactical and strategic scenarios, he also has a lot of knowledge of genetic engineering and robotics. Sounds like someone who could engineer the race of super soldiers in Project Centipede, no?

As someone who has even more clearance in S.H.I.E.L.D. than Agent Garrett, Hand could certainly gain a lot of Clairvoyant-level intelligence through surveillance. As shown in "The Hub," she's keeping a lot from Agent Coulson, and even seems a little resentful of him. And in the comics, she's even more morally ambiguous, as she works for the good guys, the bad guys, and even as a triple agent.