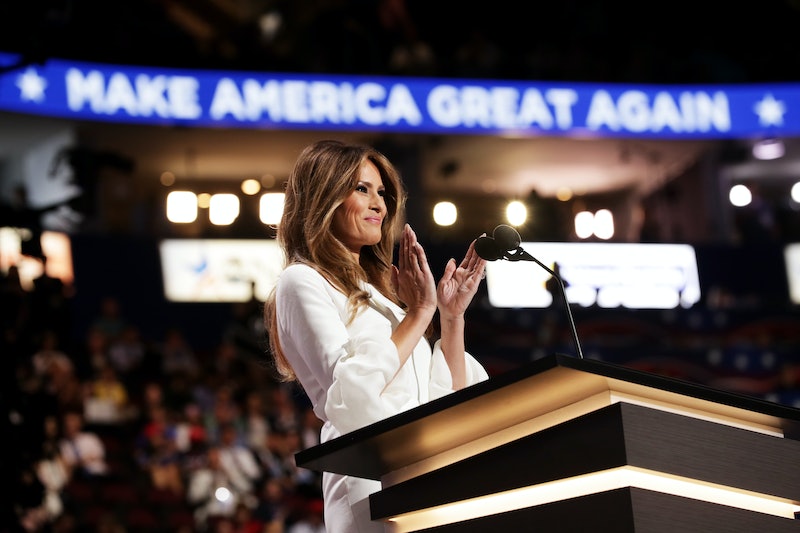 Despite being up against such luminaries as Duck Dynasty's Willie Robertson and actor Scott Baio, Melania Trump, wife of Republican presumptive nominee Donald Trump, is one of the most popular speakers to take the stage at this year's Republican National Convention in Cleveland. The reasoning behind her popularity, however, is somewhat unsavory. Before she'd even left the stage, social media users already began commenting on her looks, thus proving that Melania's RNC speech received sadly sexist reactions from people online.

Unfortunately, sexist remarks about Melania are nothing new. From MSNBC's Chris Matthews allegedly being caught on audio saying he could watch her walk all day to an anti-Trump group that reportedly used nude modeling images of Melania from 2000 in an attempt to convince religious voters that The Donald has no morals, Melania has been objectified countless times as her husband runs for commander-in-chief. Trump hasn't been any better — he famously pitted his own wife's looks against those of Heidi Cruz, the wife of Trump's former opponent Ted Cruz.

Tonight's remarks, however, are a new low. They showcase not only Republican and Trump supporters' tendency toward misogyny, but also those of non-supporters and people who just generally thought that it was more important to focus on Melania's appearance rather than her words. Because, you know, it's not like she's up to become the First Lady of the United States or anything, so why would her words matter?

Whether her looks are used to berate her, compare her to the wives of other politicians, or in support of Trump, Melania's looks should never be placed over the content of her character. There's much to admire about Melania Trump, and her beauty should not be the main event.