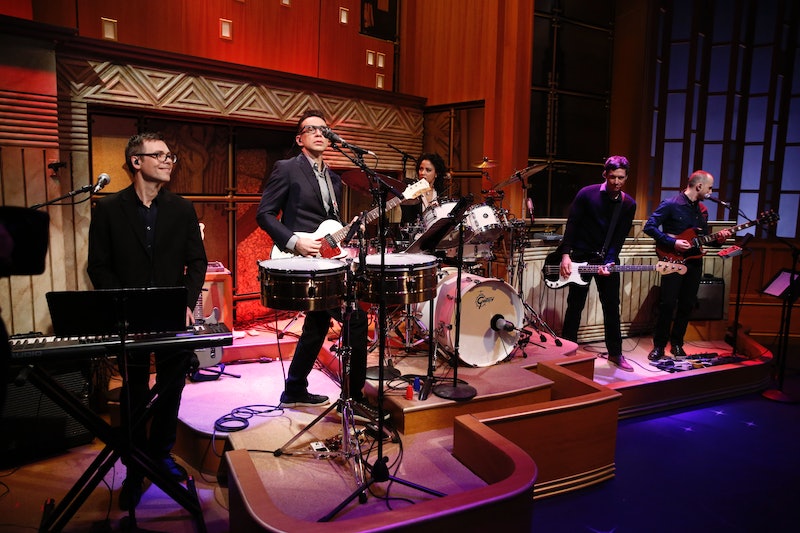 After The Roots left Late Night, many worried that Fred Armisen's new 8G Band wouldn't be able to make the cut alongside new host Seth Meyers. But after eight episodes and a little loosening up, the 8G Band has shown that they can hold their own. Sadly, aside from Portlandia's Fred Armisen, we didn't know very much about the late-night troubadours that make up 8G. 'Til now.

Let's start with Fred. Mr. Armisen is the costar and cocreator of Portlandia , the popular IFC show about the hipsters and sophisticates of Portland. He hails from a long career on SNL, and his impression of This American Life's Ira Glass is not to be missed. Supporting Fred's bandleading are Seth Jabour and Syd Butler, on guitar and bass, respectively. This duo hails from New York, and are two pieces of the indie rock group, Les Savy Fav.

Prior to 8G, they both were devoted to evolving Les Savy Fav's post-hardcore, almost-noise sound. And fun fact, Syd owns the record label that produces all of Les Savy Fav's EPs. 8G keyboardist Eli Janney has also been recorded on Syd's record label, called Frenchkiss, and is the founder of hard rock band Girls Against Boys.

Now that we've gotten all the boys out the way, lets get to the most exciting member of the 8G crew: drummer Kimberly Thompson. Kim has crossed genres, playing with jazz, rock, and R&B groups before joining 8G. She also was in Beyonce's all-female band, where she held it down like no other. Oh, and according to her website, she was once in a Run DMC video. Watch her kick ass on a blindfolded drum solo, and get excited for the future of women musicians everywhere.