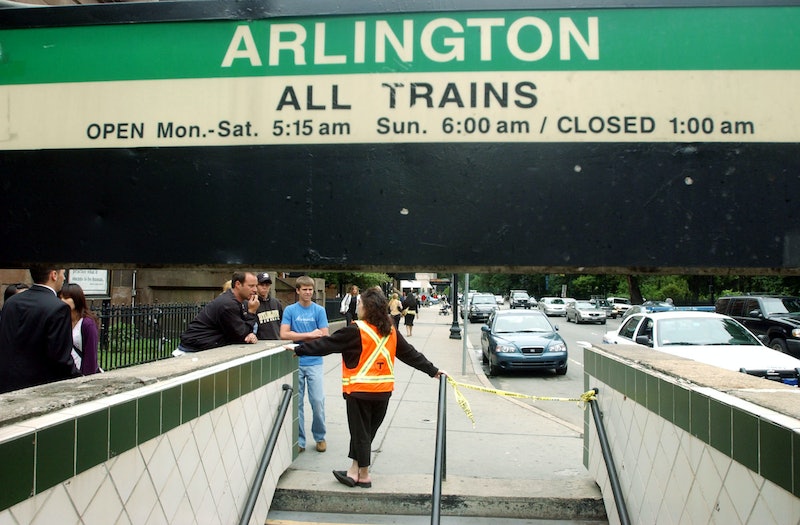 Way to stay classy, Boston. The city's high court ruled that a man who took "upskirt" photos of women on the Boston subway is actually legal, because the women are not "nude or partially nude." The court ruled that Peeping Tom laws are in effect to shield people against unwanted exposure in dressing rooms and bathrooms, but they do not extend to the MBTA. Like we didn't already have enough to worry about when taking crowded, gross, tooth-strewn, shark-infested subway cars.

The ruling was the result of a case from 2010, where a man named Michael Robertson was caught trying to repeatedly take cellphone photos up riders' dresses on Boston's Green Line. Robertson was charged in 2011, but sought an appeal — citing the photos as "free speech" — bringing his case up to the state's Supreme Judicial Court. And they had no choice but to side with him, it seems.

“A female passenger on a MBTA trolley who is wearing a skirt, dress, or the like covering [private] parts of her body is not a person who is ‘partially nude,’ no matter what is or is not underneath the skirt by way of underwear or other clothing,” the court unanimously ruled.

Besides having the most confusing underground transportation system ever (no arguments), Boston now has the wonderful distinction of being sensitive to a Peeping Tom's rights. And just in time for spring, too!

States such as New York, Washington, and Florida have laws written that specifically address upskirt photo bans, because such actions are an obvious invasion of privacy. Gina Scaramella, executive director of the Boston Area Rape Crisis Center, says that laws haven't kept up with camera technology.

"It really is a form of sexual harassment. It's a violation for the person who is unknowingly getting their body photographed," she said. "People wear clothing for a reason and having someone violate that privacy is a real problem."

To all my fellow female straphangers out there in Boston, maybe don't wear that brand-new skirt while taking the T to Wonderland. And yes, there is actually a stop in Boston called Wonderland. It's weird.