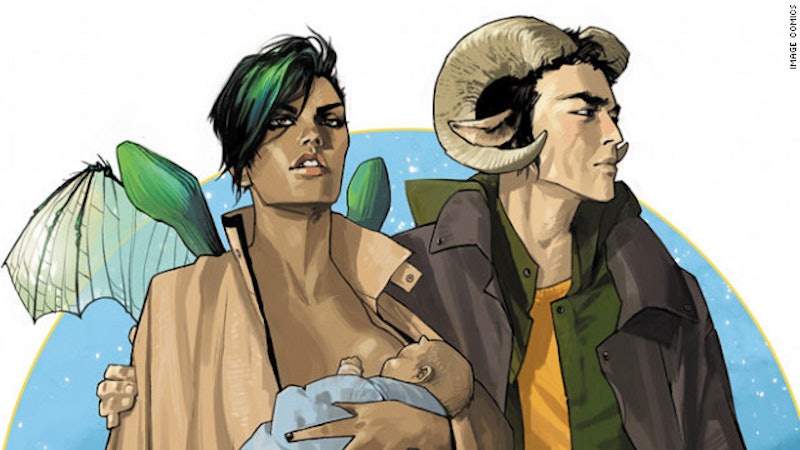 If you love comics, you need to be reading Saga, and if you hate comics, you need to be reading Saga. But if you're anything like me, you've just finished the sixth volume of Saga, and you're staring into a bleak future devoid of Alana, Marko, Hazel, and (ex)Prince Robot (and yes, I know I could just read the individual monthly issues as they come out, but I don't have the necessary patience). So, if you're stuck waiting the long wait until Brian K. Vaughan and Fiona Staples' next volume hits the bookshelves, here are some books to read if you love Saga.

After all, there are so many reasons to love Saga. The writing is brilliant, the art is beyond gorgeous, and the world (or rather, universe) of Saga is one of the most creative sci-fi/fantasy realms by far. Plus, the cast of characters is incredibly diverse (and I don't just mean in terms of alien species), and the female characters are actual real people who get to run around a fantasy universe without being overly sexualized. And, of course, the story of forbidden love, and of one family trying to stick together in a war-torn galaxy full of unnecessary violence, is all too relatable. But, shocking as it may be, Saga is not the only well-written, well-drawn, complex comic book story out there. Here are a few other books that might help you through your Saga withdrawal:

If you like Saga, chances are you'll like Brian K. Vaughan's writing across the board. Y: The Last Man is another sci-fi epic, but with a very different premise: a mysterious plague has killed all the men on Earth. All, that is, except for escape artist Yorick Brown and his pet monkey, Ampersand. With all the men out of the picture, the series is full of tough, gritty, heroic, and twisted women of every kind. If you like the post-apocalyptic adventure vibe, Y: The Last Man is the book for you.

Saga is narrated by a grown up Hazel, the daughter of intergalactic war vets Alana and Marko. Kate Kristopher, the protagonist of Shutter, would totally get that. She's the grown up daughter of a world-famous explorer, in a world somewhat like our own (except with more robot cats and trips to the moon). It's a fantasy adventure that moves at a breakneck pace, whisking us all across this strange future world, as Kate is pulled back into the explorer lifestyle she's tried to leave behind.

It's several years in the future. Non-compliance with the patriarchal overlords will get you exiled to a prison planet (and, of course, non-compliance for women can mean anything from being outspoken to being overweight). Bitch Planet is an in-your-face feminist comic, taking the busty-sci-fi-babes trope and turning it on its head. Alana would definitely approve.

If you're looking for a new comic to read, don't underestimate the power of a good old fashioned superhero story. Joss Whedon's Astonishing X-Men series is one of the greats, but still highly accessible to new readers. Much like our Saga heroes, the X-Men are outcasts from society, each with their own unique ability. But when a supposed cure to the mutant x-gene comes along, the team must face some difficult choices.

5. The Wicked + The Divine by Kieron Gillen, art by Jamie McKelvie

What if celebrities were actually divine? In the world of The Wicked + The Divine, the gods walk (and sing) among us as the world's biggest pop stars. At least every 90 years, 12 gods get to live as humans and bask in all that fame and glory. For two years. Then they die. Being immortal is weird. But it's a fascinating premise, with beautiful art, a diverse cast of characters, a lot of great hairstyles.

If you're looking for sass and sorcery, a sort of all-girl Lord of the Rings meets Buffy the Vampire Slayer but with more drinking, then you might want to check out Rat Queens. The Rat Queens are a pack of battle-maidens for hire, complete with a rockabilly Elven mage and a hipster Dwarven fighter. It's the smart, darkly funny, feminist, gory Dungeons & Dragons comic book of your dreams.

OK, just one more Brian K. Vaughan comic. This one is worth it, I promise! Six moody teens are forced to hang out every so often, because their parents all "work" together. It's only once the kids realize that their parents' "work" is cover for super-villain activity that they have to make a run for it. With various powers inherited (or stolen) from their folks, the kids must make a life for themselves (and quite possibly save the world from their nasty parents).

If the vast space-scape and alien lifeforms of Saga captured your imagination, then you should pick up Prophet. It's darker than Saga in many ways, and it's set in a bizarre and dreamlike future, just after the fall of the Earth Empire. John Prophet is determined to re-awaken the Empire, but first he must climb the towers of Thauili Van. And that's when things get... weird.

It's not space and there aren't any aliens, but Fables is a good bet for clever writing, strange creatures, and great fantasy action. The fairy tale creatures of folk lore and legend have been chased out of their ancestral home and relocated to New York City. All is going well, until Snow White's party girl sister is murdered, and a reformed Big Bad Wolf is left to get to the bottom of things.

Kamala Khan just a normal human girl from New Jersey—no space-faring alien heritage to speak of. But you can't be ordinary in the Marvel universe for too long. Kamala gains strange new powers and takes up the mantle of Ms. Marvel. Sure, there are tons of teen superhero stories to choose from, but Kamala Khan is just such a likable, relatable character, that you can't help but love every last panel of her journey in Ms. Marvel.