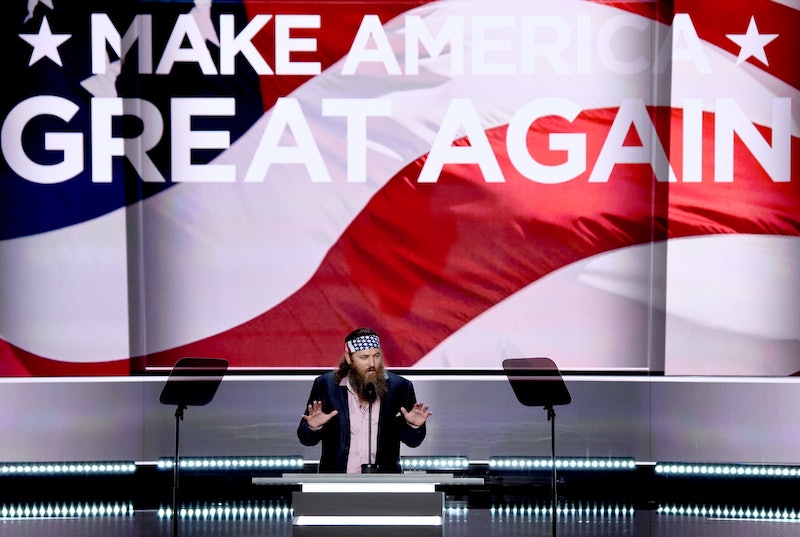 As recently as June, it felt as though both major U.S. political parties were headed for rancorous and potentially embarrassing conventions. On the Democratic side, a bruising primary battle between former Secretary of State Hillary Clinton and Vermont Senator Bernie Sanders was sowing division among Democratic-leaning voters. On the GOP side, prominent Republicans couldn’t stop denouncing their party’s likely nominee, Donald Trump. Now that Hillary Clinton and Donald Trump have emerged as their parties’ presumptive nominees, and with the GOP convention ending and the Democratic convention fast approaching, the Democrats appear to have pulled together — while the GOP has descended into chaos.

There’s been a lot of hand-wringing in this election cycle over Democratic Party unity, as measured by whether or not Sanders supporters will come out to vote for Clinton in November. It’s easy to forget that the Democratic Party went through all of this back in 2008, during what was considered by many at the time to be an unusually bitter primary fight between then-Senator Barack Obama and then-Senator Hillary Clinton. But as Emory University political scientist Alan Abramowitz noted, there’s no evidence that disaffected Clinton supporters sat out the 2008 election in large numbers, despite abundant threats to do so (remember the Clinton supporters who dubbed themselves PUMAs, for “Party Unity My Ass”?). Before the 2008 Democratic convention, only 47 percent of Clinton supporters said they were certain to vote for Obama in November. After the convention, that figure rose to 65 percent.

Compare that to May 2016, well before the Democratic convention, when a whopping 72 percent of Sanders supporters said they’d vote for Clinton in November if she became their party’s nominee.

According to The Washington Post, around one in six Clinton supporters did ultimately defect to the GOP candidate, Senator John McCain, in November 2008 — but Obama still won 89 percent of all Democratic-leaning voters, tying with the 2004 Democratic nominee, then-Senator John Kerry, for the highest level of Democratic Party unity since exit polls were first conducted in 1972. As The Nation put it, “at the end of the day nine out of 10 Democrats supported Obama in an election that featured the highest turnout in 40 years.”

A well-run Democratic convention is likely to win Clinton even more votes in the general election.

Of the 2016 election, Julia R. Azari, associate professor and assistant chair of Marquette University’s political science department, tells Bustle in an email, “One way to look at this is that both parties had insurgencies, but in the Republican party, the insurgents won. In the Democratic party, the establishment favorite won.”

In other words, it’s no surprise that an experienced politician like Clinton, who enjoys the full support of her party’s leadership, is running a more disciplined and cohesive campaign than an upstart like Trump, who is openly loathed by his party’s leaders.

Especially now that their opponent is Donald Trump, a man who is viewed unfavorably by 95 percent of Democrats, the Party is united — at least in disgust for Trump, if not in ardor for Clinton. Now that Clinton has received long-awaited endorsements from respected progressives, including Massachusetts Senator Elizabeth Warren and Sanders himself, there’s no official opposition to her candidacy from high-ranking members of her party.

By contrast, Leesa Rasp, a doctoral candidate in political science at the University of Missouri, tells Bustle in an email that “the GOP is more fractured than I have ever seen it before. … The GOP developed strong fault lines as a result of the Tea Party movement … and that separation has endured through the present. … What we are now seeing is the earthquake or tremor that is bringing those fault lines to the surface.”

As for the Clinton-versus-Sanders divide among Democrats, Lindsey Cormack, assistant professor of political science at the Stevens Institute of Technology tells Bustle that while "some Democrats may not like Hillary, they all see her as the clearly preferred candidate over Donald Trump. … It’s not like everyone’s jazzed but no one’s so unhappy they won’t vote for her.”

Rasp sees it as “less of a divide within the Democratic party” than a schism between Democrats and independents, or Democrats and Libertarians. “Many Bernie supporters were not party loyalists, were not registered Democrats, and were drawn to Bernie's message due to their own ideological beliefs,” she tells Bustle, adding that she “believe[s] the Bernie supporters [within] the Democratic Party will eventually come over to the Hillary camp.”

Meanwhile, Heath Brown, assistant professor of public policy at John Jay College of Criminal Justice, tells Bustle, “The Democrats are not united on all views, but the degree of difference is smaller on the Democratic side than [it is] on the GOP side.” Tammy R. Vigil, assistant professor of communication at Boston University, sees the Democrats as “pretty strong, but not entirely unified,” adding in an email that “as a party they are in a MUCH better position going into their convention than the Republicans.”

“The disunity in the GOP is a full-fledged identity crisis.”

Nowhere is the GOP’s disunity and disorganization more evident than in the list of Republicans who skipped their party’s convention this year, which includes former presidents George H. W. and George W. Bush and former Florida Governor Jeb Bush; former GOP presidential nominees Mitt Romney and John McCain; and most of Trump’s primary opponents, including John Kasich, the governor of the state in which this year’s GOP convention is being held.

At least 18 GOP senators are also sitting out their party’s convention, including Sen. Ben Sasse (R-Nebraska), whose spokesman told The Hill Sasse would skip the convention in favor of “[taking] his kids to watch some dumpster fires across the state.” (A number of Democratic senators skipped the Democratic convention in 2012, but most did so without openly trashing their party’s nominee.) As for convention speakers, the RNC did manage to snag Trump’s wife, Melania; his two daughters, Tiffany and Ivanka; and the slightly-less-homophobic guy from Duck Dynasty.

Andrea C. Hatcher, associate professor of politics at Sewanee: the University of the South, tells me in an email she thinks the reason the GOP appears so much less organized than the Democratic Party this year is that “the Democrats are fighting over a messenger, but the GOP is fighting over the message itself.” Hatcher believes that Clinton, Sanders, and their supporters favor similar policies but disagree over who is best positioned to champion them.

By contrast? “The disunity in the GOP is a full-fledged identity crisis,” she says.