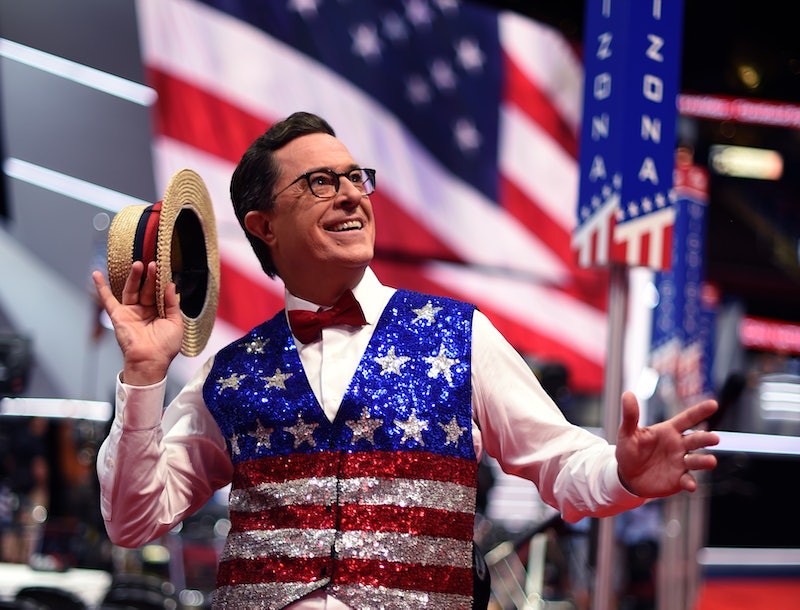 Comedian and late-night television host Stephen Colbert is mixing up his set for the Republican National Convention. On Monday's Late Show, Colbert revived his ultra-conservative persona from The Colbert Report, along with his old segment "The Word." Referencing his famous neologism "truthiness," Colbert unveiled a new term, which plays off it while fitting into the current political context. Colbert invented "Trumpiness" to explain people's support of Donald Trump.

Truthiness, Colbert reminded us, means "believing something that feels true, even if it isn't supported by fact." Colbert invented this word to capture an element of the Republican political climate in 2005, when then-President George W. Bush's frequently stated that his decisions came from his "gut." But the 2016 Republican landscape, which has Trump at its forefront, requires an amended version of the term.

"Truthiness has to feel true, but Trumpiness doesn't even have to do that." Colbert referenced a Washington Post article from June, "Many Trump supporters don't believe his wildest promises — and they don't care." That now serves as the definition of the term. The article references a FOX poll from May in which two-thirds of Trump supporters said they thought he'd build a wall, and only 43 percent thought he'd actually deport millions of undocumented immigrants. "These legitimately angry voters don't need a leader to say things that are true or to feel things that are true," Colbert said. "They need a leader to feel things that feel feels."

While this may seem like straight-up snarky fun-poking, there's more to it than that. Colbert emphasized that Trump supporters who don't believe what he says are not dumb. They feel like "the world has gone crazy" since manufacturing jobs started getting shipped overseas, and that half of Americans "don't feel like their voices are being heard." Colbert described Trump as an "emotional megaphone" for people who are angry about the political and economic systems. He called Trump a walking, talking emotional catharsis for his supporters, whose focus is on anger itself, as opposed to the particular diagnoses or proposed remedies for the sources of that anger. Of course, Trump supporters don't form a monolith. There are those who respond to his tough talk on immigrants and Muslims, and there are those who believe that as president, he would follow through on even his most far-fetched proposals.

But the phenomenon of a presidential nominee with a substantial number of supporters who don't even believe what he says is worthy of dissecting. With "Trumpiness," Colbert attempted to do just that, balancing the absurdity of the situation with the acknowledgment that the anger many of these people feel is valid.