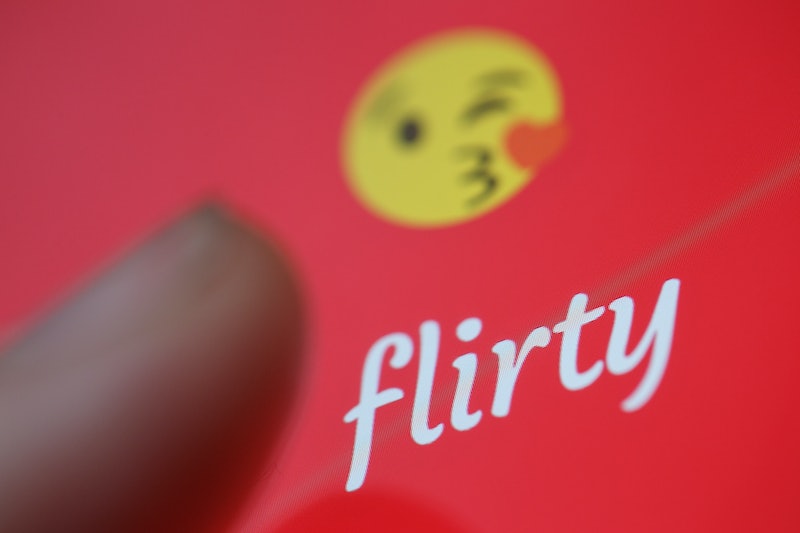 Like most card-carrying geeky girls, I possess a handful of odd talents. These include absentmindedly drawing doe-eyed anime sketches, accurately diagnosing my friends with medical conditions, figuring out ways to insert Poe jokes into work emails, et cetera. (Fellaaas?)

There is one thing that I am convinced I will never be good at, though, and that is flirting. And I'm talking about regular flirting, you know, not even next-level stuff like the kind Courtney Love did to land Kurt Cobain. (It's sort of the most psycho-sexy thing ever that she nicknamed him "Pixie Meat" and they still boned.) Talking to strangers (or near strangers) is bad enough without all the added pressure of maintaining a certain je ne sais quoi throughout. This is probably why I tend to befriend people I like before aggressively sinking my claws into them for three or four years at least.

Surely I can't be the only lady nerd who would sooner binge-watch Twilight Zone (the old, good Twilight Zone, obviously) than play coy with a probable bar homunculus. And surely I'm not the only one who's made an ass out of myself trying, anyway. Perhaps some of the below examples of my flirting behavior look familiar?

So you decide to ease into it, all chill-like, with some suave come-hither tactics.

Then you try to recover by discussing a topic of, you assume, general interest...

And you're met with this.

That's when you realize that you've inadvertently come-hithered a pretty dumb person.

It's pretty much the worst feeling.

I mean, to be fair, you occasionally also find a winner, and that's pretty exciting.

The best ones aren't even scared when you come on a little too strong.

That might even give you the confidence to talk dirty.

Or to try to seduce them with your sweet dance moves.

Whatever. Point being, you're prone to overthinking...

...and that can really hinder your flirting game.

But, once you get past that, and the weird comic book references, and the weirder math jokes, one thing's for sure — nerds are high-quality lovers, and well worth a few fumbled come-ons. I mean, did you even watch The O.C.?!