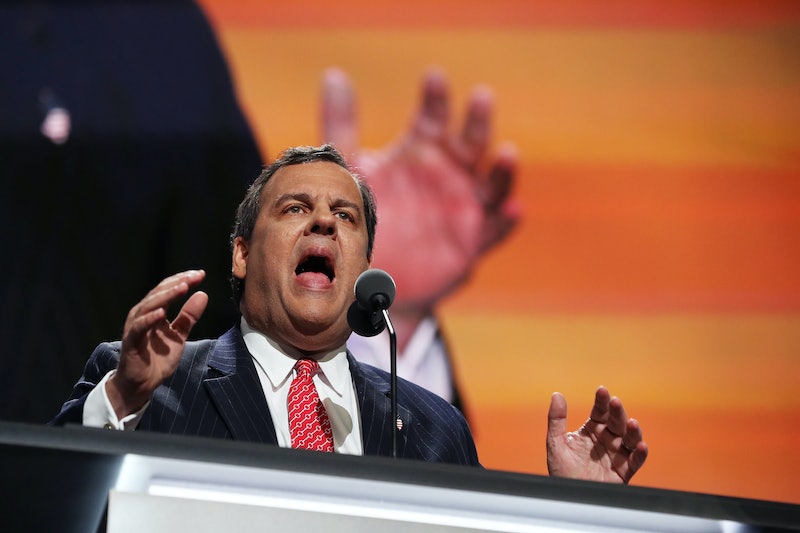 In what was sure to be one of the most talked-about speeches of the Republican National Convention (you know, after the whole Melania Trump thing) Chris Christie delivered a scathingly critical takedown of Hillary Clinton on Tuesday night. Twitter, of course, responded in kind by sharing jokes and memes about Christie's RNC speech that are sure to leave you chuckling (or maybe scratching your head).

During his speech, Christie spoke about everything from Clinton's email scandal to her supposed fraternization with countries America "opposes," like Russia, Cuba and Syria during her time as Secretary of State. He also highlighted the supposed less-than-savory aspects of Clinton's tenure, including her alleged "coddling" of the Castro family in Cuba who offered asylum to famed Black Panther and FBI Most Wanted member Assata Shakur (née JoAnne Chesimard) after her escape from prison, where she served time for the murder of a police officer.

Christie used the word "guilty" in reference to Clinton no less than 22 times in his speech, and his continued insistence of the former Secretary of State's guilt riled up the crowd to the point where they began chanting "Lock her up!" to which Christie only smiled.

Many joked about the witch hunt-like tone Christie struck, while others soberly noted the eerie nature of the crowd's seeming thirst for blood.

He Kept Saying Clinton Is Guilty, Which Sounds A Lot Like...

It Was Pretty Scary

But It Was Kinda Funny, Too

All In All, It Was Pretty Messed Up

If Christie's speech (and crowd reactions) didn't send shivers down your spine, then you are either a time-traveler from the Clinton presidency era, or you are really, really jaded.