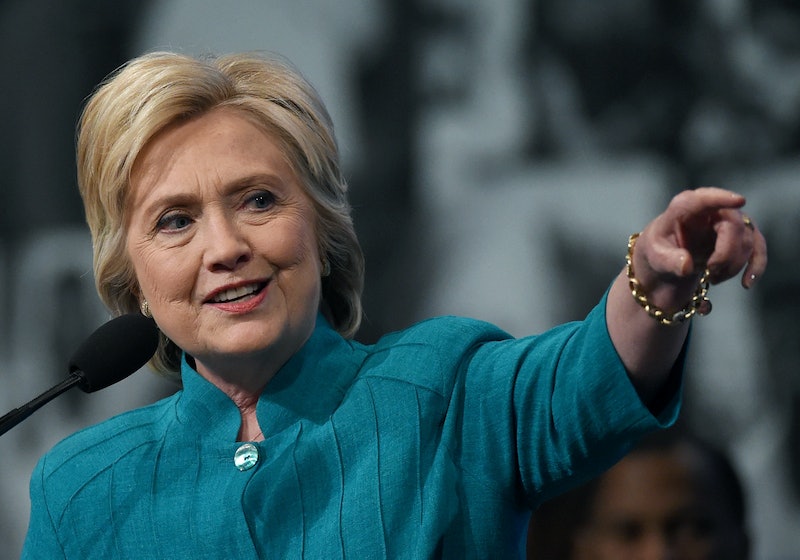 With this week's Republican National Convention winding down, the Democratic National Convention is gearing up — one that, believe it or not, less than a week away. So what is the DNC's schedule, and will the event be as big of a circus as its Republican counterpart? Donald Trump hasn't gotten a lot of support from the heavy hitters in his party, but Hillary Clinton's convention is looking to be another story.

With far less of a dramatic drum roll (seeing as how Trump intended to focus his convention on a "showbiz" feel), the Democratic candidate is expected to be officially announced as the party's presidential nominee. As opposed to their Republican counterparts, the party doesn't look as divided over the decision.

Here are the details you need to know about the big event. The convention will take place from Monday, July 25 to Thursday, July 28 in Philadelphia, at the Wells Fargo Center. On Monday, in an effort to establish the optics of the party's united front, Bernie Sanders is expected to speak in support of Clinton. Sanders recently officially endorsed Clinton, but he hasn't successfully converted all of his followers, with a "fart in" protest from his supporters expected at the convention, according to a report from NBC News. Sanders' speech will come immediately following a showing from FLOTUS Michelle Obama.

Making an appearance to potentially woo the Latino vote will be Astrid Silva, an undocumented immigrant and activist for the group United We Dream, which is an immigrant-focused, youth-led organization.

On Tuesday, Clinton's husband, former President Bill Clinton, is expected to start the day's speeches. He will be followed by Mothers of the Movement — a group made up of black mothers suffering the loss of their children to violence. It includes the mothers of Trayvon Martin, Michael Brown, and Sandra Bland. The group even released a video in support of the former secretary of state, explaining why she has their vote.

On Wednesday, President Obama, whose influential support has been crucial in Clinton's campaign, will make an appearance, as will Vice President Biden. There's still no official word on who Clinton's VP pick will be, but she is said to be especially interested in a running mate who has a strong national security record. Names are starting to circulate, like Secretary of Agriculture Tom Vilsack and Sen. Timothy Kaine of Virginia — who haven't been on the list of speculated contenders up until now.

On Thursday, along with daughter Chelsea, Clinton herself will wrap up the convention, where she is expected to officially accept the party's nomination.

You can follow along with the event, as the Democratic National Committee will be hosting a live stream on their website. Also, the DNC rolled out its official convention app on Tuesday, servicing local and national spectators alike with maps and details about local venues, as well a live stream of the convention.