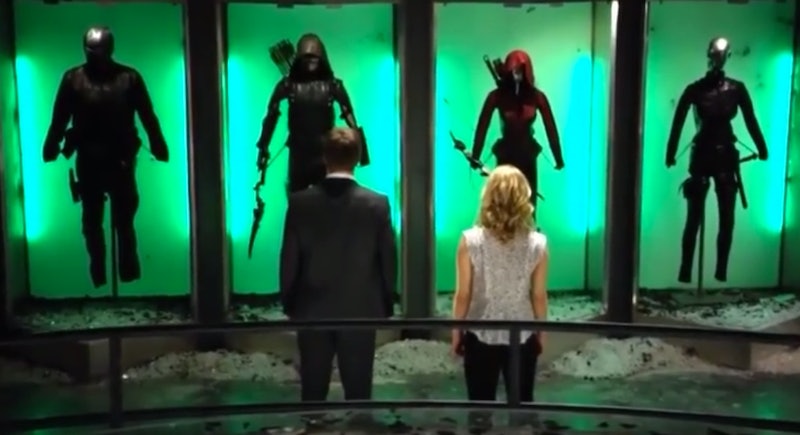 Oliver and Felicity from Arrow have become one of my most favorite TV couples of all time, but that is sweet torture when you consider the whiplash I suffered after enjoying the pair in near-wedded bliss for half a season only to have them break up just before they walked down the damn aisle due to some especially baby mama drama. To add insult to injury, the Oliver and Felicity on Arrow was left in limbo after their breakup, right down to the last scene of the season finale, where the two physically stood side-by-side but still seemed to be worlds apart emotionally. TV Guide asked Wendy Mericle, Arrow's Executive Producer, how fans are supposed to interpret Oliver and Felicity's last scene in the lair. To which I say, um yeah, what gives?

Mericle explained that Oliver and Felicity, "were the only two people left in the bunker, which we felt was symbolic. We deliberately left it ambiguous." So, do with that what you will. While the answer itself seems quite ambiguous in terms of where we'll find Olicity in Season 5, personally, I think it's both a good and a bad thing that they left it so open-ended. Don't worry, I'll explain myself. Extinguish your torches, and, for the love of god, stop sharpening your pitch forks. I'm on your side, fellow Olicity fans. Here's what I think about the "deliberately ambiguous" comment:

You don't just get over your fiancé hiding a secret child from you and then subsequently sending said child off into oblivion. Man, it sounds bad when I put it like that. More importantly, Olicity was slowly but surely built up for three seasons. To push them back together without acknowledging the issues between them would be, well, wrong.

The Good: Now They Can Take Time To Resolve Their Issues Properly

But, not too much time. The limbo is fun for only so long, and then it gets repetitive and eventually you get too tired of all that bending. Plus, it hurts.

The Bad: I Think I Speak For All Of Us When I Say The Angst Has Become A Bit Too Much

I understand that Oliver Queen lives in a dark world that continually delivers him tragedy after tragedy, and that is the nature of Arrow. But, Felicity Smoak has always been the exception to that rule. So why did his healthy, happy relationship with her have to be one of the casualties? Where is the reprieve?

The Bad: It Opens Up The Door For Other Love Interests

Which would be laughable, because you can't top this.

The Good: Sexual And Romantic Tension

All right, I'm a sucker for this. I admit it. Especially because Olicity does it so well. That chemistry? Off the charts.

The Bad: Ambiguity Might Insinuate That Olicity Is Still On The Backburner

The writer's could potentially just be biding their time. But, the thing is, Olicity was the last kid picked for the kickball team for the entire last half of the season. Continuing to keep them apart and not dealing with them would just be neglectful. Felicity, and his relationship with her, has become too vital to Oliver's existence to ignore it. It'd stunt his growth as a character.

Listen, I know I was spoiled watching all that Olicity relationship goodness unfold in real time, but, like a spoiled child, I want what I what when I want it. And, I want Olicity back, ambiguity be damned.