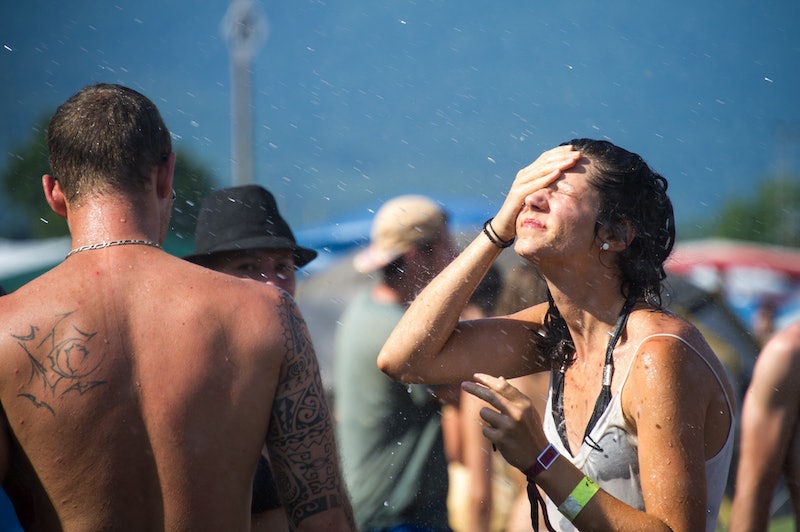 If you've been lucky enough not to notice yet, it's really hot outside. The bad news? It's about to get even worse. Most of the United States will endure a "heat dome" this week, with skyrocketing temperatures in nearly every part of the country. But what is this phenomenon, and which states will the heat dome strike? It's a meteorological event which is responsible for this week's dangerously high temperatures.

A heat dome is caused by a ridge in the jet stream, the path of air that circulates across the United States. When a ridge happens, as one is expected to over the Midwest this week, high pressure sometimes gets trapped in one area and won't move. The high pressure creates a dome which won't let hot air rise, forcing it back down toward the ground and reheating it on the way back down. The confluence of events causes temperatures to shoot up. Many major Midwestern cities, including Des Moines, Kansas City, St. Louis, Minneapolis, Oklahoma City, and Chicago, are expected to crack temperatures of 100 degrees.

High temperatures become even more dangerous when humidity gets factored into the equation. On a 100-degree day, even 40 percent humidity will make the temperature feel like it's nearly 10 degrees higher, and at 70 percent humidity, it feels like 136 degrees. As soon as the heat index (the "feels like" temperature that's calculated by combining the real temperature and the humidity) pops above 90, you're in the danger zone. Be extra careful when going outside during this heat wave, because it can be seriously deadly.

An interesting agricultural phenomenon accounts for the high humidity in the Midwest states, where temperatures can feel like they're in the high triple digits due to the wet air. It turns out that corn sweats the same way people do — when it gets too hot, the crop will release water through its leaves to cool off. That water evaporates into the atmosphere, causing a spike in humidity in places where a lot of corn grows. Although it's not what's causing the heat dome, it's going to exacerbate it significantly, making the Midwest even more unbearable during this temperature spike.

You might think corn sweat is a good reason not to move out into the farmland, but cities can be just as bad, if not worse. Urban heat islands in large cities are a product of buildings trapping hot air, paved roads absorbing heat and sunshine, and a ton of people everywhere. Temperatures can be up to five degrees hotter during the day and 20 degrees hotter at night than in a rural area. Basically, nowhere is safe.

If you're looking to escape the heat, it might be a good time to explore Oregon or Washington state. The Pacific Northwest is the only region in the country expected to be spared the heat dome. Which is pretty unfair, since Seattle's average high temperature in July is only 72 degrees to start with. If you can't jet out to the West Coast and miss the heat, your best bet to is stay indoors and crank up that AC.