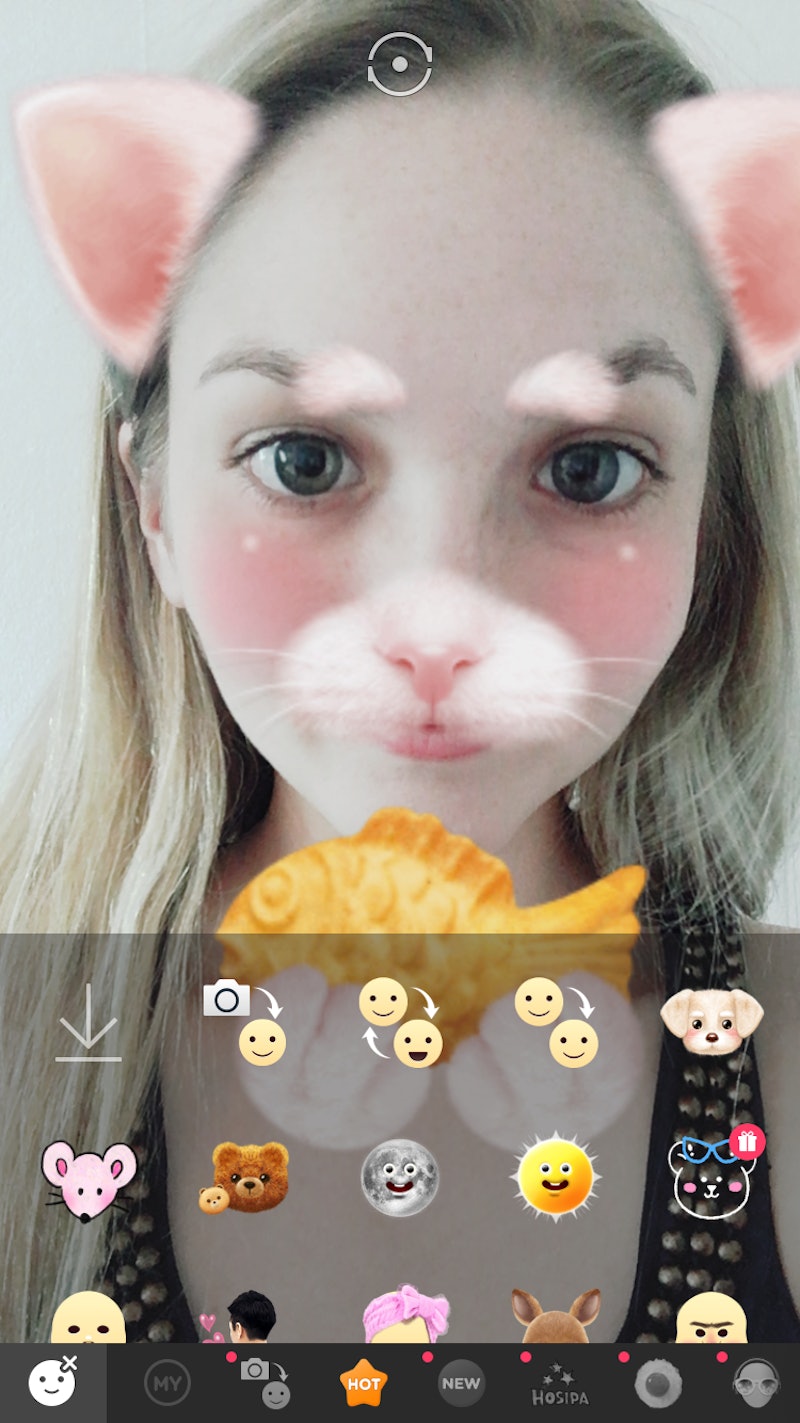 Humble Snappers, you should know that Snapchat has some fierce competition, and it's coming straight out of cool-town South Korea. Your new secret-selfie-weapon: Snow, a Snapchat-like app with filters — so, so many amazing filters. Basically an infinite number of filters. The app was released by the South Korean internet and gaming company Naver (developer of LINE messenger) last September, and since its introduction has been downloaded over 30 million times. The majority of the social network/photo app's users are located throughout Asia. The New York Times points out that Snow has a big advantage in that market since Snapchat is blocked in China.

Americans will find Snow's interface intuitive, as it looks exactly like Snapchat. The app offers many of the same photo editing features as well, including the ability to add emojis, text, and drawings to your images. Just like with Snapchat, you can play around with your face, creating fun-house mirror distortions, slapping on cute puppy and kitty filters, or even add a flower crown.

The apps are so similar that I even got a bit confused. I mean, can you tell the difference between the two? (Answer: Snapchat is on the right, Snow on the left).

Some of the filters may have you seeing double as well:

Before shrugging off Snow as a total clone (which it kinda is), the app does offer some fun things to improve the creative photo sharing experience and help you document some super weird memories. You can create gifs on Snow (like Instagram's Boomerang feature) and film short videos which highlight some of the zanier "live face effect" options offered by the app.

Snow has also made some slight changes to the social network-side as well. Any stories you create on Snow are viewable for a full 72 hours, instead of Snapchat's tight 24, and the messages sent to your Snow contacts stick around for 24 hours instead of disappearing mere seconds after click on them (I'm never quite fast enough to screenshot the good ones!). With Snow you can even set a sinister sounding "self-destruct timer" for your photos. But the real star of the show here is the seemingly bottomless array of selfie filters. Scrolling through the tab, the animations you can overlay range from kawaii cute to trapped-in-a-nightmare disturbing.

My warning before you download the app and try a few of these unusual filters: once you see it, you can't un-see it. (Yep! That's a disembodied hand pulling a stocking off my engorged face.)

Many of Snow's filters are aimed at the Asian market and are fun to play around with as well. You can drink a bottle of Soju, look like an anime character, a sumo wrestler, or a K-pop star (my ultimate dream!).

If you don't want to use the social networking aspect of Snow, you can use the app to bolster your Instagram and Snapchat game. Save the shots and videos you snap on Snow and share them on different platforms. When Snapchat and Snow work together perfectly, people won't be able to resist saying, "... wow."

To see just how fun the app is, you're gonna have to try it out yourself. As to whether Snow be able to carve out a user base in U.S. where Snapchat reigns supreme — that, my friends, is a question I cannot answer. Just like I can't answer why the app is called "snow" or why its icon looks like (to quote Cosmo) "a blue … levitating turd."

More like this
Behind The Hilarity Of The "POV: You Walk Into My Room" TikTok Trend
By Lexi Inks
Why TikTok Is Flooded With Controversial Videos About "Pick Me Girls"
By Courtney Young
How To Turn Off Night Mode On Your iPhone Camera
By Emma Carey
26 Ghost Story Podcasts To Get You Ready For Halloween
By Jessica Booth, Mia Mercado, JR Thorpe and Emma Carey
Get Even More From Bustle — Sign Up For The Newsletter