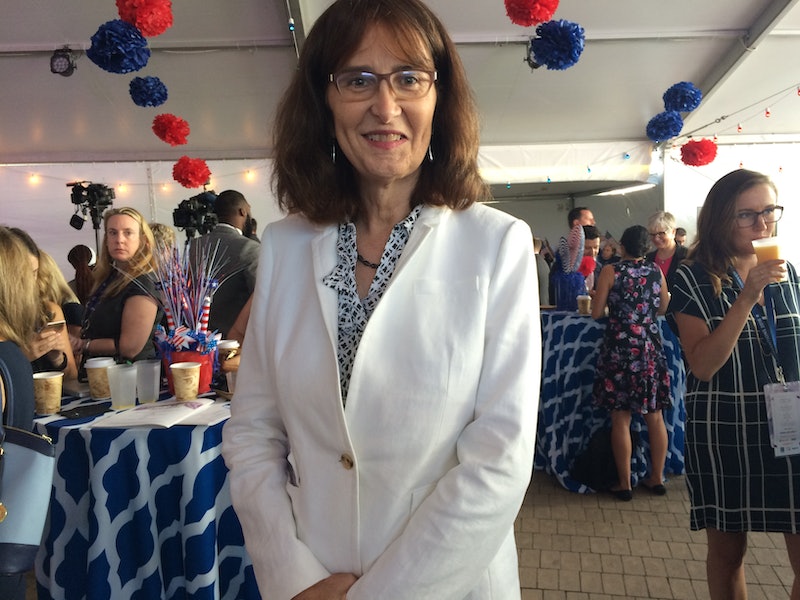 An LGBT brunch was held at Cleveland's Rock and Roll Hall of Fame on Wednesday, the third day of the Republican National Convention. Hosted by the American Unity Fund, the event was billed as a "Big Tent Brunch" intended to "showcase conservative support for LGBT freedom." Former Olympic athlete and current transgender icon Caitlyn Jenner, who is a Republican, was the headliner, but also among the RNC brunch attendees was Mara Keisling. Keisling is the executive director of the National Center for Transgender Equality, an organization founded in 2003 to advance equality for transgender people — and she spoke with Bustle on Republicans, Donald Trump, and how some members of the transgender community find a place in the party.

Keisling says she attended the breakfast because, "[Ours] is a nonpartisan organization and wherever there are people who want to be educated, we want to be there. And there's a lot of people everywhere who really need to learn more about transgender people and our lives." But she's realistic that the Republican Party might need a bit of help. Regarding the perception that, at least on trans issues, the Democratic Party is more progressive, Keisling says, "Well, I think that's probably, generally speaking, correct." However, she adds, "20 years ago, almost everybody was transphobic. Fifteen years ago, we were fighting both parties a lot. And we've been winning over people in both parties ever since."

It's true that the movement for trans equality has made massive gains in recent years. But how does a group like the National Center for Transgender Equality feel about the GOP presidential nominee? Trump has no consistent stance on transgender rights, though he was markedly less hostile to the trans community during the GOP primaries than many of his opponents (for example, Sen. Ted Cruz).

"We don't quite know what to make of [Trump], honestly," says Keisling. "And I should say we don't support candidates at all, so I don't want to talk about his candidacy at all, but he has said conflicting things and some positive things, some negative things."

Keisling says there are a lot of transgender, gay, and bisexual Republicans, but the reasoning for leaning right obviously varies depending on who you're talking to. Some people feel that the GOP is the better party for them, and "sometimes it's because they may think their party's better [on trans issues]," Keisling says, and "sometimes, it's because they're interested in some other issue that they think that party's better [on]."

But Keisling, who has seen her fair share of challenges in the trans equality movement, is direct when it comes to continuing to face political strife. The big problem, she says, is officeholders and politicians who use transgender people for political purposes. And that's why she attended the RNC brunch, to educate others about transgender people and their lives.

"[Politicians are] using us to scare people by vilifying us so that they can get something they want. ... I think transgender people would rather just be left alone than to be used politically by people of bad faith."

More like this
An Honest Review of MeUndies Boxers, According To A Non-Binary Person
By Megan Lasher
The 19 Best Tweets & Memes About Bisexual Awareness Week
By Lexi Inks
Pro Footballer Zander Murray Is "Blown Away" By Support After Coming Out
By Sam Ramsden
Chris Kaba's Family Continue Fight For Justice After Viewing Police Bodycam Footage
By Sophie McEvoy
Get Even More From Bustle — Sign Up For The Newsletter