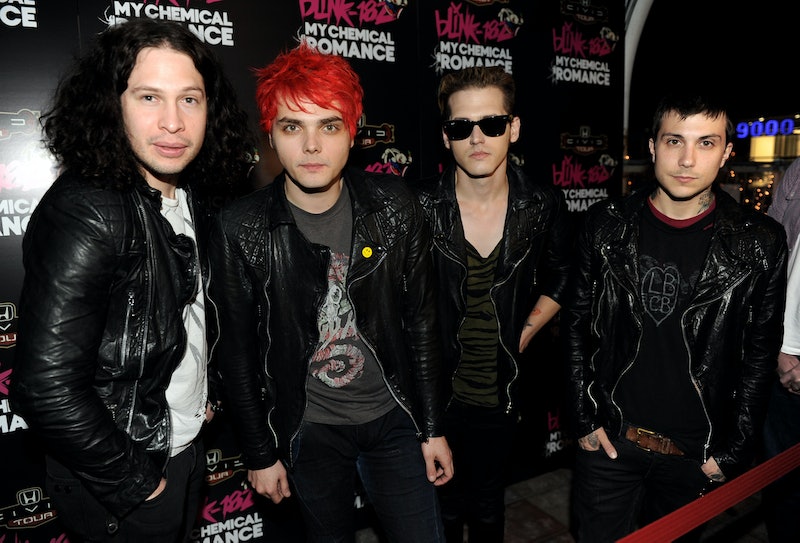 Are you ready to feel like your old '00s self again? I mean, Pokemon is already trendy again, so we were all already halfway there — but now, MCR is here to take us the rest of the way. That's right: The emo days are here again thanks to a mysterious announcement from My Chemical Romance that seems to insinuate the band might be making a comeback. Posted via their Twitter earlier on July 20, the pinned tweet is a video showing a flag emblazoned with a new logo slowly waving in the wind. As it waves, a slow piano version of "Welcome To The Black Parade" plays (can you feel your teen angst surging yet?). Finally, the video ends with an date, slow-faded in for ominous effect: "09/23/16." What does it all mean? Is My Chemical Romance planning an ostensible comeback after their breakup three years ago?

My Chemical Romance broke many a teenager's heart back in 2013 when the announced that they were parting ways. The reasons were largely undisclosed, though lead singer Gerard Way wrote in a statement that, "There are many reasons My Chemical Romance ended. The triggerman is unimportant [...] I can assure you there was no divorce, argument, failure, accident, villain, or knife in the back that caused this, again this was no one’s fault, and it had been quietly in the works..."

While Way pursued a solo career following the breakup, My Chemical Romance remained mostly a non-entity, aside from releasing a Greatest Hits album in 2014. That is, until today.

Now, it appears the band may be coming back in some form or another and boy, oh boy, the reactions are hilarious and probably the essence of a fandom that is suddenly being revived:

And one fan believes that there's a perfectly solid explanation to be had:

Which is a fair point. It's been 10 years since one of the band's biggest albums, Welcome To The Black Parade, was released. For the occasion, predictions of a tour or perhaps a new album are not too far-fetched.

Some are simply telling the rest of the world, "No kidding. Put the pieces together, you fools."

So, should we start bracing ourselves for the return of My Chemical Romance? Or is this all pomp and circumstance?

More like this
Kate Bush Revealed The Real Meaning Behind 'Running Up That Hill' Lyrics
By Darshita Goyal
Netflix Reveals First Look At Wednesday In The 'Addams Family' Spinoff Series
By Bustle Editors
She Founded American Girl To “Bring History Alive.” Then She Made Over A Town.
By Amanda FitzSimons
'Survivor' Is Finally Coming Back To UK Screens
By El Hunt
Get Even More From Bustle — Sign Up For The Newsletter