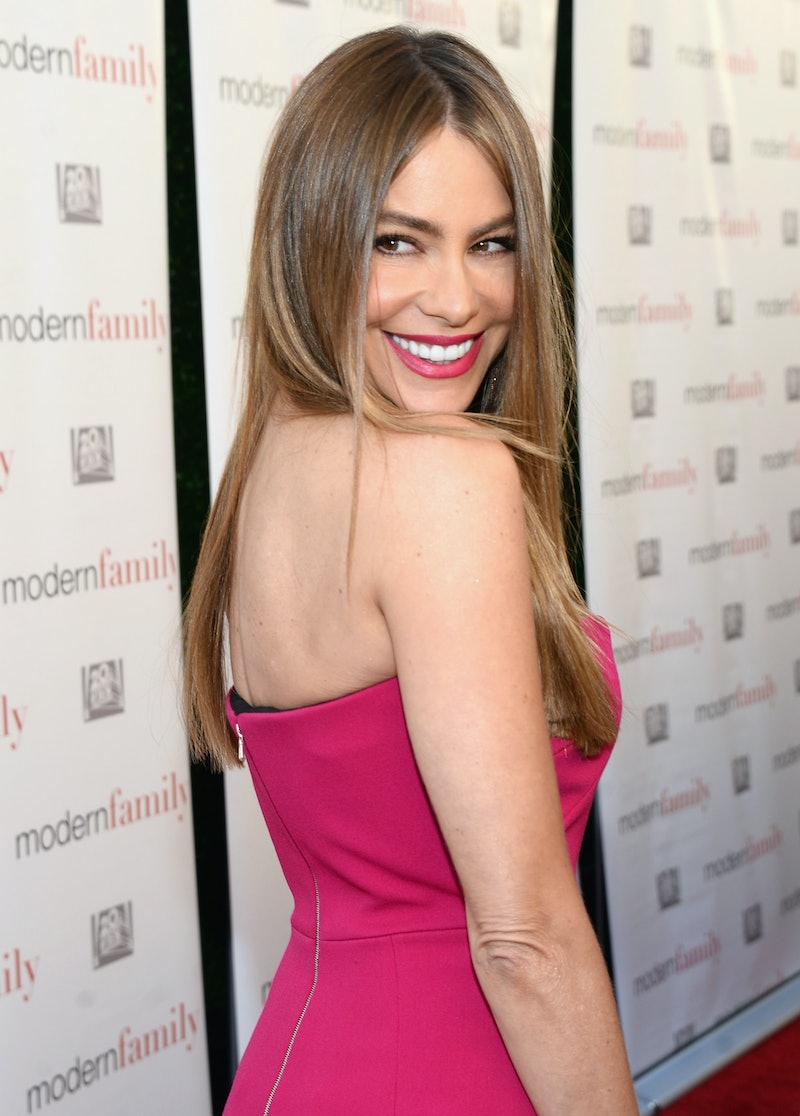 If anyone knows how to catch someone's attention, it's Sofia Vergara. But it's not just her good looks and million dollar smile, it's her scent — and no, I'm not just talking about her pheromones. Sofia Vergara just launched a new fragrance called Tempting by Sofia Vergara. It's her third creation, which not only officially makes her a perfume tycoon, but also an expert on scents. I spoke to Vergara at the Sunset Tower Hotel in Los Angeles, and she told me all about her new fragrance, how she came to choose the notes in it, and where she likes to apply it. Yes, you'll want to take some notes.

Vergara likens Tempting to a red lipstick — it's not something you might want to wear every day, but it's meant for special occasions when you want to feel like you're "ready for action," as she puts it. "My first fragrance was a little bit fruitier, a little more vibrant and you could wear it all day long — it's a scent that is timeless. The second one was a little bit sweeter, more romantic, and then this one — I wanted something sexier," Vergara tells me.

"It's something that's for dates, night time, for dinner, or a business meeting even — when you want to feel like how you feel when you put on a red lip — something special. It's sensual, which is why it's named Tempting. It's supposed to make you feel put together and sexy." In other words, it's confidence in a bottle — something I think we could all use every once in a while.

This is a far cry from what Vergara used to wear. When I asked her what her first perfume was growing up, she told me that she didn't really wear perfume — she wore the exact opposite of Tempting. "In Colombia, we used baby cologne. I would wear that to go to school, like always." However, when she was finally able to purchase her first fragrance, she chose one from a fellow Hollywood star. "I do remember White Diamonds from Elizabeth Taylor, and I thought it was so glamorous. I remember using that, and I remember thinking, 'One day I'll have my own perfume.'"

Tempting has notes of fresh cut pineapple, Colombian Passion flower, purple vanilla orchid, jasmine, musk, sandalwood, and last, but certainly not least, vanilla. "Vanilla is something I like in perfumes," says Vergara. "Not that it's just for this, but it's been tested that men react very good to vanilla — and women, too! I mean, I love everything that is sweet," she smiles. "It has all the combinations of all the different notes that make it sexy."

Even the bottle itself is attractive. According to Vergara, it was meant to mimic the curves of a woman's physique. "For all of my perfumes, I wanted to make a bottle that would look good anywhere. But it was also me wanting to tell a story — this time, because it's called Tempting, because it smells a lot sexier, we thought that the shape of a girl would be sexy." As for the snakeskin print on the box? "When people ask me what my favorite color is, I say animal print. I thought it would be beautiful and sexy to have the snakeskin."

Now, for the most important lesson — where and how should you apply your perfume? There really isn't a right or wrong way. When I ask Vergara for her tips, she laughs and says, "Don't ask me that, because I put it everywhere." Vergara motions all over her body. "I put it here, and here, and here, I put it in my clothes, my hair — everywhere."

But one spritz before she leaves the house isn't enough. Vergara never leaves home without a bottle of perfume, and has one in her trailer, at her house, and in her car (though she learned that perfume can get bad in the heat). "I always like to reapply. It makes me feel refreshed — like a quick shower." Lazy girls everywhere rejoice — if a perfume shower is good enough for Vergara, it's definitely good enough for us.