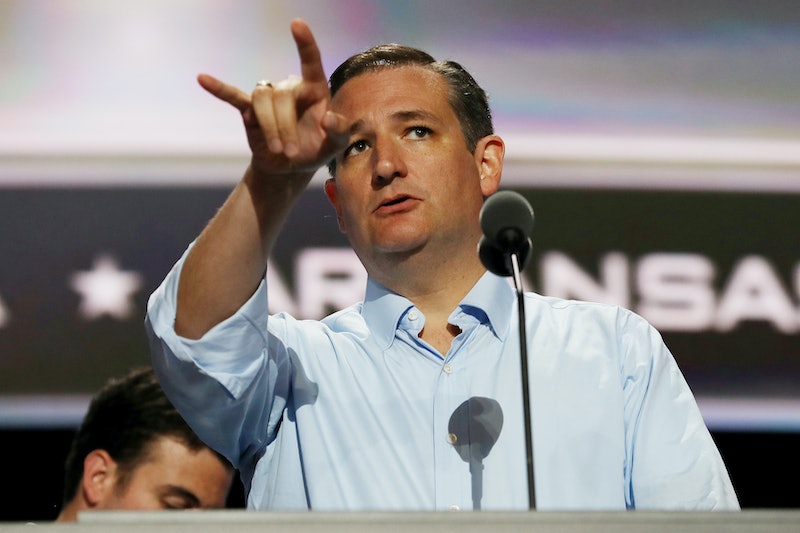 We all have likely gotten over the fact that Donald Trump has become the Republican presidential nominee, but one person clearly hasn't. The transcript of Ted Cruz's RNC speech shows how bitter he is about losing to Trump in the presidential race, even months after he dropped out, and how he tried to divert the attention away from Trump and toward America regaining its freedom.

Many thought that Cruz would have been one of the favorite presidential candidates this year, but that wasn't necessarily the case. The theme of Night Three of the Republican National Convention was "Make America First Again." Although it's unclear what, exactly, we're trying to be first at, that was the decided focus of the night. And for Cruz, it likely felt good to be in the spotlight again after conceding to Trump — a man who Cruz has called "a pathological liar," "narcissist," and "utterly immoral."

Cruz admitted during his speech that he had to spend time figuring out what to talk about during his RNC speech. Unsurprisingly, he began with an anecdote related to Texas and reminded the crowd, "We're fighting not for one particular candidate or campaign." Interestingly, rather than mentioning Trump or Trump's positions, Cruz focused much of his speech on the idea of freedom and America, an America he said he hopes we will be proud to have our children grow up in. Cruz continued with the theme of "America, home of the free" and bashed our divided nation, reminding everyone in the crowd that America is such a great country because, according to Cruz, it was built on the five words: "I want to be free."

Cruz's speech, which called on everyone in the audience "to be better" and really sounded like a presidential speech for the Cruz campaign in 2020, showed that he's maybe a little bitter about losing and still doesn't want to talk too much about Trump.

Thank you, and god bless each and every one of you.

Heidi and I are so honored to join you here in Cleveland where LeBron James just lead an incredible comeback victory, and I am convinced America is going to come back too.

I congratulate Donald Trump on winning the nomination last night.

And, like each of you, I want to see the principles that our party believes prevail in November.

Conventions are times of excitement. But given the events of the last few weeks, I hope you'll allow me a moment to talk to you about what's really at stake. Just two weeks ago, a nine-year-old girl named Caroline was having a carefree Texas summer — swimming in the pool, playing with friends, doing all the things a happy child might do. Like most children, she took for granted the love she received from her mom, Heidi, and her dad, a police sergeant named Michael Smith.

That is, until he became one of the five police officers gunned down in Dallas.

The day her father was murdered, Caroline gave him a hug and kiss as he left for work. But as they parted, her dad asked her something he hadn't asked before. "What if this is the last time you ever kiss or hug me?'"

Later, as she thought of her fallen father, and that last heartbreaking hug, Caroline broke down in tears. How could anything ever be OK again? Michael Smith was a former Army Ranger who spent three decades with the Dallas Police Department. I have no idea who he voted for in the last election, or what he thought about this one. But his life was a testament to devotion.

He protected the very protestors who mocked him because he loved his country and his fellow man. His work gave new meaning to that line from literature, "To die of love is to live by it."

As I thought about what I wanted to say tonight, Michael Smith's story weighed on my heart. Maybe that's because his daughter, Caroline, is about the same age as my eldest daughter and happens to share the same name. Maybe it's because I saw a video of that dear, sweet child choking back sobs as she remembered her daddy's last question to her.

Maybe it's because we live in a world where so many others have had their lives destroyed by evil, in places like Orlando and Paris and Nice and Baton Rouge. Maybe it is because of the simple question itself What if this, right now, is our last time? Our last moment to do something for our families and our country? Did we live up to our values? Did we do all we could?

That's really what elections should be about. That's why you and millions like you devoted so much time and sacrifice to this campaign. We're fighting, not for one particular candidate or one campaign, but because each of us wants to be able to tell our kids and grandkids, our own Caroline's, that we did our best for their future, and for our country.

America is more than just a land mass between two oceans. America is an idea, a simple yet powerful idea: freedom matters.

For much of human history, government power has been the unavoidable constant in life — government decrees, and the people obey. Not here. We have no king or queen. No dictator. We the People constrain government.

Our nation is exceptional because it was built on the five most powerful words in the English language, "I want to be free."

Never has that message been more needed than today. We stand here tonight a nation divided. Partisan rancor, anger, even hatred are tearing America apart. And citizens are furious, rightly furious, at a political establishment that cynically breaks its promises and ignores the will of the people.

We have to do better. We owe our fallen heroes more than that.

Now, of course, Obama and Clinton will tell you that they also care about our children's future, and I want to believe them. But there is a profound difference in our two parties' visions for the future.

Theirs is the party that thinks ISIS is a "J.V. team," that responds to the death of Americans at Benghazi by asking, "What difference does it make?" That thinks it's possible to make a deal with Iran, which celebrates as holidays "Death to America Day" and "Death to Israel Day."

My friends, this is madness. President Obama is a man who does everything backwards — he wants to close Guantanamo Bay and open up our borders, he exports jobs and imports terrorists. Enough is enough.

There is a better vision for our future: A return to freedom.

On education, your freedom to choose your child's education, even if you aren't as rich as Hillary Clinton or Barack Obama.

On healthcare, your freedom to choose your own doctor, without Obamacare.

On taxes, your freedom to provide for your family without the IRS beating down your door. The Internet? Keep it free from taxes, free from regulation, and don't give it away to Russia and China.

Freedom means religious freedom, whether you are Christian or Jew, Muslim or atheist.

Whether you are gay or straight, the Bill of Rights protects the rights of all of us to live according to our conscience.

Freedom means the right to keep and bear arms, and protect your family.

And freedom means recognizing that our Constitution allows states to choose policies that reflect local values. Colorado may decide something different than Texas. New York different than Iowa. Diversity. That's the way it's supposed to be. If not, what's the point of having states to begin with?

Hillary Clinton believes government should make virtually every choice in your life. Education, healthcare, marriage, speech — all dictated out of Washington. But something powerful is happening. We've seen it in both parties. We've seen it in the United Kingdom's unprecedented Brexit vote to leave the European Union.

That's a profound victory. People are fed up with politicians who don't listen to them, fed up with a corrupt system that benefits the elites, instead of working men and women.

We deserve an immigration system that puts America first. And yes, builds a wall to keep us safe.

That stops admitting ISIS terrorists as refugees. We deserve trade policies that put the interests of American farmers and manufacturing jobs over the global interests funding the lobbyists.

And if we stand together and choose freedom, our future will be brighter. Freedom will bring back jobs, raise wages. Freedom will lift people out of dependency, to the dignity of work.

We can do this. Forty-seven years ago today, America put a man on the moon.

That's the power of freedom. Our party was founded to defeat slavery.

That's our collective legacy, although the media will never share it with you. Those were fights for freedom, and so is this.

Sergeant Michael Smith stood up to protect our freedom. So do our soldiers, sailors, airmen, and Marines fighting radical Islamic terrorism.

So did the family of Alton Sterling, who bravely called to end the violence. So did the families of those murdered at the Charleston Emanuel A.M.E. church, who forgave that hateful, bigoted murder.

And so can we. We deserve leaders who stand for principle. Unite us all behind shared values. Cast aside anger for love. That is the standard we should expect, from everybody.

And to those listening, please, don't stay home in November. Stand, and speak, and vote your conscience, vote for candidates up and down the ticket who you trust to defend our freedom and to be faithful to the Constitution.

It's love of freedom that has allowed millions to achieve their dreams. Like my Mom, the first in her family to go to college, and my Dad, who fled prison and torture in Cuba, coming to Texas with just $100 sewn into his underwear.

And it is love that I hope will bring comfort to a grieving 9-year-old girl in Dallas — and, God willing, propel her to move forward, and dream, and soar... and make her daddy proud.

We must make the most of our moment — to fight for freedom, to protect our God-given rights, even of those with whom we don't agree, so that when we are old and gray... and our work is done... and we give those we love one final kiss goodbye... we will be able to say, "Freedom matters, and I was part of something beautiful."

Thank you. And may God bless the United States of America.