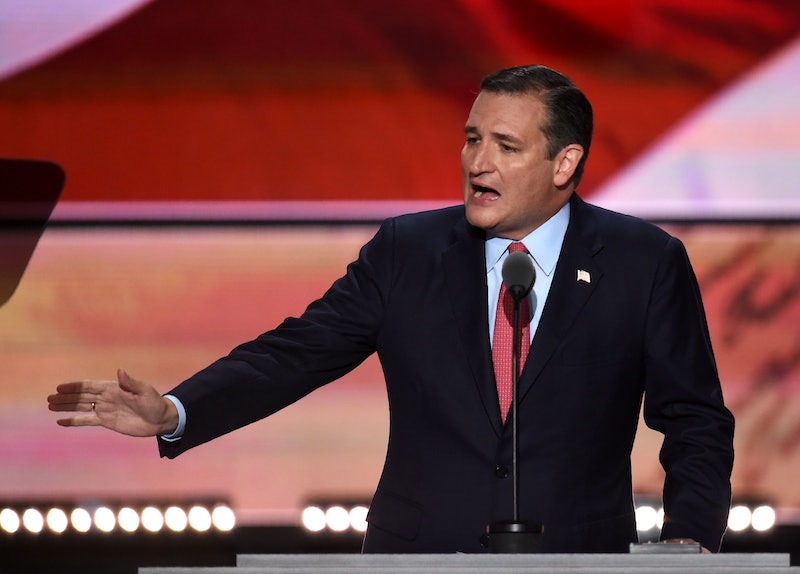 At the Republican National Convention Wednesday night, a one-time presidential candidate for the party gave a surprising speech which addressed gay rights, religious liberty for Muslim Americans, and even police brutality against black Americans. Yes, really, all of this happened. At the RNC. One particular Ted Cruz RNC speech quote championed diversity and equality over fear and division in a totally unexpected way.

Cruz's egalitarian call was perhaps even more surprising than his non-endorsement of Donald Trump, making him yet another high-profile Republican to distance himself from the boisterous, fear-mongering billionaire.

In his speech at the Quicken Loans Arena, an emboldened Cruz told the crowd that freedom belongs to everyone, including members of the LGBTQ community: "Freedom means religious freedom, whether you are Christian or Jew, Muslim or atheist. Gay or straight. The Bill of Rights protects the rights of all of us to live according to our conscience."

That quote is a major step up for the notoriously anti-gay Cruz, who, in the past, has aligned himself with faith leaders who advocate murdering gay, bisexual, and transgender people. However, in the same breath of acknowledging the rights of LGBTQ Americans, Cruz also decried safe spaces. "Freedom means free speech, not politically correct safe spaces," he said. He added that freedom "means Supreme Court Justices who don't dictate policy, but instead follow the Constitution."

Yet Cruz also touted states' rights - specifically, how a state like Texas can have different laws than, say, Massachusetts:

And freedom means recognizing that our Constitution allows states to choose policies that reflect local values. Colorado may decide something different than Texas. New York different than Iowa. Diversity. That's the way it's supposed to be. If not, what's the point of having states to begin with?

That's all fine and good, until one state deprives a certain class of people rights - like Massachusetts allowing same-sex marriage while Texas forbids it. Or how a state like Texas can pass a slew of laws to drastically reduce the number of abortion clinics within it, while states on the West Coast protect and even work to expand access to abortion. Ah well, you tried, Ted.

Still, this is one of the first times the ultra-right Cruz has acknowledged the rights of LGBTQ Americans. Does this represent a changing tide for him? Maybe. The Texas Senator also refused to endorse Trump Wednesday night, encouraging people to vote with their "conscience" come November. If your heart and mind are already walled off, then Trump may be your guy, but Cruz made one final plea.

"We deserve leaders who stand for principle. Unite us all behind shared values," Cruz said. "Cast aside anger for love."