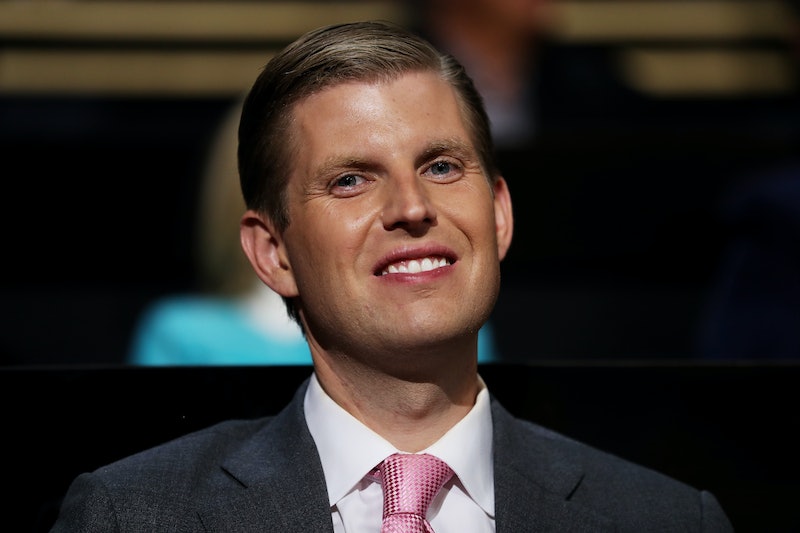 The youngest son from GOP nominee Donald Trump's first marriage spoke today at the Republican National Convention just one day after his father was formally nominated to become the party's 2016 presidential nominee. Check out the full transcript of Eric Trump's RNC speech below, which proves how proud he is to be a member of the Trump family.

Eric talked about the importance of electing his father as president, while hitting on the reasons why Trump is running for president (he said he'd only do it "if it got so bad"). Eric Frederick Trump is Trump's third child with his first wife, Ivana. The 32-year-old is currently the vice president of The Trump Organization, the owner of Trump Winery, and the founder of the Eric Trump Foundation, a philanthropic group which raises money for St. Jude's Children's Research Hospital.

Eric's life may seem charmed — his primary day-to-day responsibility at The Trump Organization seems to be to target distressed golf courses for acquisition — but that doesn't mean that he hasn't experienced the harsh glare of the spotlight. In 2012, Eric and his older brother Donald Jr. came under fire for a safari hunting excursion where they were photographed with their trophy kills in all the gory detail. Trump posed for a photograph with a dead civet, and along with his brother, posed with a dead antelope, as well as a massive crocodile strung up on a tree to commemorate their trophy-hunting trip. He has also been a target of media criticism after he apparently changed his story about how his father supports (or doesn't support) his foundation.

Wow. Wow. Good evening, Cleveland. Wow. It is such an an honor to be here for a man I love so, so, so so much. That is my father.

Thirteen months ago, my father sat my family down and told us the time had come.

He could no longer sit idly by and watch our beloved country, the country that had given our family so much success, so much opportunity, crumble before our very eyes.

He confirmed to us that he was prepared to announce his candidacy for president of the United States.

He made sure to acknowledge that ours would not be an easy path.

That we should prepare ourselves for what was to come.

That we'd quickly learn who our true friends were.

Without hesitation, we each committed our unwavering support.

But this time, none of us could have predicted what lay ahead.

The records he would break, the stadiums he would fill, the movement he would start.

Today my father stands before you with the most primary votes of any Republican candidate in the history of our nation.

He shattered voter registration records across the country.

He has defied the predictions of every single political pundit and turned traditional debates into must-see TV.

He has inspired multiple generations, including my own, millennials like myself who have so little faith in politicians that they no longer even consider public service to be a noble career.

A year ago, my father was a businessman.

But like many Americans, he simply could no longer stand to see what was happening to our great country.

He could no longer stand to see special interest dollars dictate an incompetent foreign policy that puts foreign countries before our very own.

He could no longer tolerate an inept administration that considers giving $150 billion to Iran for releasing five radical Islamic terrorists a successful negotiation.

He could no longer bear witness to our continued Second Amendment attacks.

He could no longer stand to see the word 'Christmas' stripped from public use, or the Pledge of Allegiance removed from our schools in an effort to be politically correct.

So my father made the courageous decision to set aside a company to which he has dedicated his entire life, to set aside a global brand that he has made synonymous with success, with quality, with uncompromising ... just the best.

At a time when people at the pinnacle of their career like my father would have held fast to a lifestyle that has truly become the epitome of the American dream, my father instead chose to give that dream back to the people it had eluded for so long.

As daunting of a journey as he knew it would be, for him, he knew it was the easiest decision in the world.

After all, who better to implement a common sense business approach to this country?

Who better to apply practical solutions to the impractical decision-making of an administration that has bred a $19 trillion debt, one that goes up by $32,000 a second and over $2 billion a day?

Who better to implement common sense tax reductions for one of the highest-taxed nations in the world, allowing our citizens the chance to keep more of what they earn, as opposed to having it squandered away by our inefficient government?

Who better to negotiate the return of countless American manufacturers, like Nabisco and Ford and Carrier, and so many others, back to the United States where they began, than a man who has single-handedly employed tens and tens and tens of thousands of people around the country?

It's time for a president with common sense.

It's time for a president who understands the art of a deal and appreciates the value of a dollar: our tax dollars.

It's time for the president who has always been the one to sign the front of a check, not the back.

Throughout my father's career, he has been repeatedly called on by government to step in, save delayed, shuttered, and and grossly over-budget public projects, everything from the exterior of Grand Central Terminal in New York to the iconic old post office in Washington, D.C., just to name a few.

Back in 1986, the city of New York tried to refurbish a simple ice skating rink in Central Park. The project dragged on for six years and blew up to over $13 million, $5 million over an already-inflated budget.

That's when my father, who overlooked this disastrous construction site from his office window each and every day, decided he had to step in.

Disgusted by government incompetence and ineptitude, he invested $2 million of his own money in order to complete the project.

What had taken the city over half a decade to botch, my father completed in less than six months, two months ahead of schedule and over a million dollars under budget.

It's time for a president who can make America great again, ahead of budget, and ahead of schedule, too.

My father has revitalized run down neighborhoods, shaped skylines across the country, and turned dreams into reality his entire career. It's what he does; it's who he is.

Well, ladies and gentlemen, that day has come.

As I travel the world that my dad built, and the greatest golf courses and hotels and real estate projects, I see the unmistakable look in his eyes.

I see in his eyes the indignity and frustration of a domestic infrastructure back at home that is in complete disarray and no longer on par with so many other developed nations. I see in his eyes the sadness of innocent lives lost, like those of Kate Steinle and Jamiel Shaw and so many others cut short by illegal immigrants in sanctuary cities, victims of a revolving door of government ineptitude and corruption that leaves innocent Americans defenseless.

I see in his eyes the humiliation of an education system ranked 30th in the world.

I want to thank my father for the life that he's enabled me to provide for my future children as my beautiful wife Lara and I start thinking about that amazing chapter of our lives.

To that end, I often think about the legacy I wish to leave my children, and to me, there are few things that I hold closer to my heart than charity.

For me, it's the essence of who we are as human beings. It's the barometer by which we will be measured for our time here on Earth.

As Martin Luther King, Jr., once said, "Life's most persistent and urgent question is what are you doing for others?"

When I was 22 years old, I founded the Eric Trump Foundation, to benefit St. Jude's Children's Research Hospital, an incredible, incredible organization.

I run my foundation based on the principles my father taught me: honesty, integrity, and values.

I expect other charities to be run by the same moral code, not serve as conduit for personal enrichment, not become a beacon of corruption and scandal.

To whom much is given, much will be required. This is the very belief that compelled my father to make this great sacrifice, to run for the most powerful yet unforgiving office in the world. There is no greater calling, there is no more selfless an act.

To the unemployed voter sitting at home watching me right now, wondering how you're going to make your next mortgage payment, or rent payment, my father is running for you.

To the veteran tuning into this speech from his or her hospital, who has been ignored and disrespected by an ungrateful system for far too long, my father is running for you.

To the schoolteacher forced to walk through metal detectors each and every day into an underfunded school, my father is running for you.

To the laborer who is watching me right now, forced out of job by undocumented workers, illegal immigrants, my father is running for you.

To the oil and gas industry worked denied a job because of radical regulations from a radical EPA, my father is running for you.

To single mothers, to families with special needs children, to middle class families who can no longer afford medical benefits sufficient to cover their everyday needs, my father is running for you.

This November, I ask you to be true to yourself and vote for the candidate who you know is running for the right reasons.

Vote for the candidate who has never been a politician.

Vote for the candidate who has never received a paycheck from our government.

Vote for the candidate who can't be bought, sold, purchased, bribed, coerced, intimidated, or steered from the path that is right and just and true.

And quite frankly, friends, vote for the one candidate who does not need this job.

I'm incredibly honored to be part of this journey on which he's invited me, Don, Ivanka, Tiffany, Melania, my beautiful wife Lara, our entire family, to play such an integral part.

Dad, you have once again taught us by example, you are my hero, you are my best friend, you are the next president of the United States.