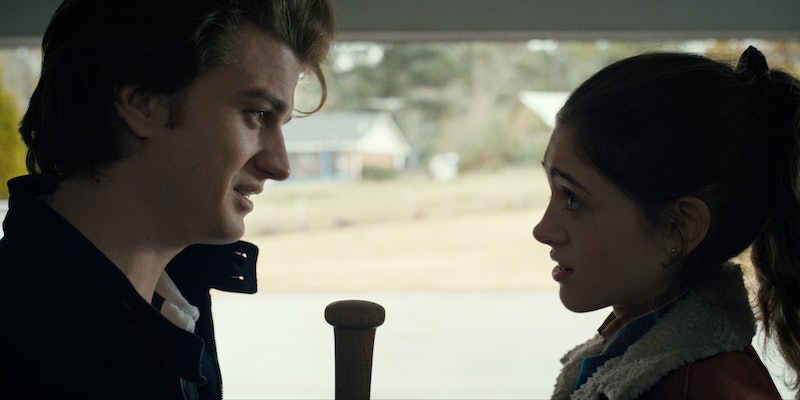 Even though the main focus of Netflix’s new show Stranger Things is centered around a giant monster attacking people, there’s still a major love triangle going on between Nancy, Steve and Jonathan. [SPOILERS AHEAD] I’m sure we haven’t seen the end of it, but for the moment it seems that Nancy picked Steve Harrington over Jonathan. Some people may have been surprised by her choice of the stereotypical popular guy over the nice, quiet photographer, but it actually makes a lot of sense that she stayed with Steve in the end.

In a recent interview with Variety, the creators of the show, Ross and Matt Duffer explain how Steve Harrington’s role in Stranger Things actually changed after meeting Joe Keery. “He was much more likable and charming than we originally had envisioned. If you read the pilot, he’s the biggest douchebag on the planet,” Ross Duffer said. “Joe was so good we started to fall in love with the idea that he has an arc himself. He’s maybe not the perfect guy, but he’s maybe in with the wrong crowd. As opposed to him turning Nancy to his side, maybe it’s more Nancy turning him to her side. We liked giving him that arc.”

In most movies/tv shows the character ends up with the nice guy, but is that really realistic? It’s nice that they had her choose the guy that she would probably be with in real life.

She Really Liked Him

This whole thing happened in the span of a week. You don't just lose your virginity to a dude you're super into and then chose the other guy, who just happened to take ultra creepy photos of you.

He’s Not A Horrible Guy

Did he do some bad things? Yes, but Steve Harrington really isn't that bad of a guy, especially when you compare him to his two friends.

He Was Nice To Barb

Yeah, Barb was a nerd, but Steve didn't leave her out of the party. He was even nice to her when she was at his house. It was Nancy that was rude to Barb, pressuring her to drink and (unintentionally) sending her to her death.

He Bailed On His Crappy Friends

In most shows the nerdier person is corrupted by the cool kids, but in this one Steve realized his friends were awful and bailed on them because he really liked Nancy. Aw, she made him a decent person.

He Apologized For Being The Worst

Yeah he was a huge jerk when he saw Nancy with Jonathan in her room, but he totally made up for it when he help erase the sign on the movie theater. Not to mention he went to Jonathan's to apologize not knowing Nancy was there and even though Jonathan legit attacked him.

He Helped Fight The Monster

Did you see him with the barbed wire baseball bat though? He kicked some a** against the monster in that finale though.

He Supported Jonathan And Nancy's Friendship

Post-drama, he supported their friendship and the fact that she bought Jonathan a brand new camera.

I'm positive this love triangle isn't over yet. Let's see what happens in a possible Season 2.

More like this
Caleb McLaughlin Details Racism From 'Stranger Things' Fans
By Radhika Menon
Kate Bush Revealed The Real Meaning Behind 'Running Up That Hill' Lyrics
By Darshita Goyal
Here's What Jeffrey Dahmer's Dad Has Said About His Other Son, David
By Grace Wehniainen
Where Is Lionel Dahmer Today? Jeffrey Dahmer’s Father Reflected On The Serial Killer’s Death In 2020
By Brad Witter
Get Even More From Bustle — Sign Up For The Newsletter