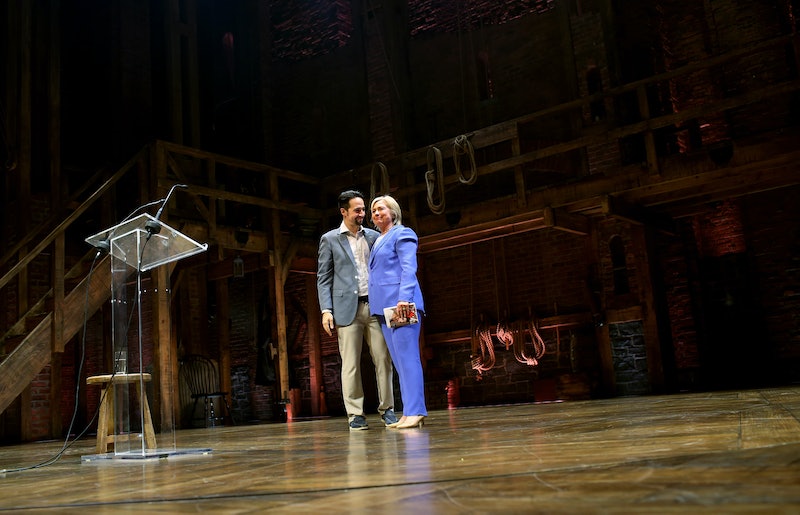 The Democrats are set to put the GOP to shame with their convention in Philadelphia, Pennsylvania next week — at least, as far as celebrity appearances go. The GOP might have had soap opera star (turned avocado-farmer) Kimberlin Brow, speak at the Republican National Convention, but the Republicans couldn't seem to find too many other celebrities who want to "Make America Great Again." On the other hand, the star-studded line-up for the Democratic National Convention just keeps growing. However, as Lena Dunham, America Ferrara, and Debra Messing — just to name a few — add themselves to the list, you might be wondering: Will Lin Manuel Miranda be at the DNC?

Well, nothing is certain yet, but many are speculating that yes, the Hamilton creator will be in Pennsylvania next week.

At the end of June, Politico reported that the operatives in charge of the DNC attempted to sign up Miranda for the convention; however, Miranda never confirmed whether or not he would attend. Furthermore, Miranda is scheduled to film Mary Poppins in London during the DNC, so he may not be able to fit a trip to Philadelphia into his schedule. But wait, don't loose hope, Hamilton fans, there's still a chance Miranda will be at the DNC next week.

While no one has confirmed that Miranda will be at the convention in Philadelphia, there is speculation on Twitter that he will indeed attend, and it's well-known that Miranda is a big supporter of Hillary Clinton. In fact, The New York Times reported that Miranda held a Hamilton matinee to fundraise for Clinton on July 12, with tickets costing at least 2,700 dollars each. At the fundraiser, Miranda referred to Clinton as the 45th President of the United States, after he asked the audience, "Are you going to vote for the guy who wants to build a wall or for someone who’s building bridges?"

According to The New York Times, Clinton has seen Hamilton three times, and while the presumptive Democratic nominee has never rapped with Miranda like President Obama has, she says the show makes her cry every time.

The DNC is sure to be a star-studded event; however, an appearance by Miranda — not to mention a Hamilton performance — would certainly make the 2016 convention the Democrat's best yet. It looks like we're just going to have to wait and see if Miranda is en route to Philadelphia — but really, who would turn down an invitation to the DNC?