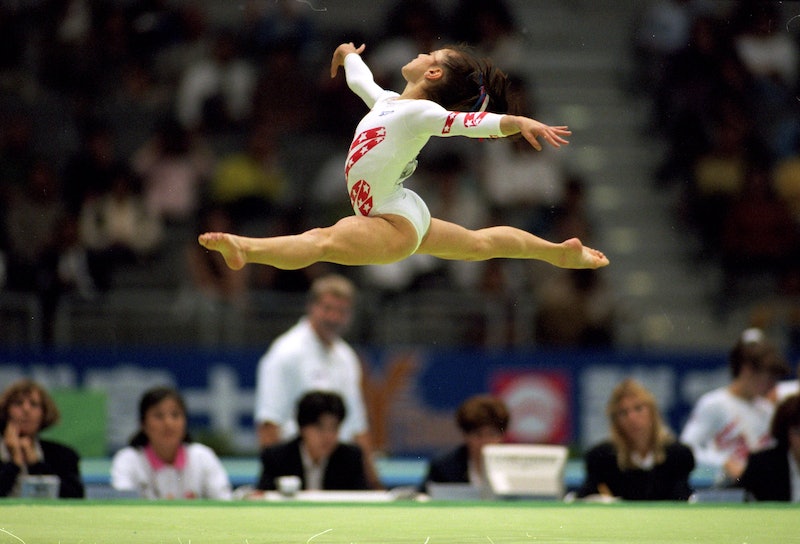 Twenty years after the Magnificent Seven won the United States' first ever gold in women's team gymnastics, where is Dominique Moceanu now? You'd think that making Olympic history would call for a vacation, but Moceanu tells Bustle that after the team's win, she jumped straight into a post-Olympic tour, performing for audiences across the country. "Honestly, I can say I really enjoyed gymnastics so much at that time because... I was doing it so free from pressure, from just performing, and I had such a great time," she says. "I used to put pressure on myself to perform well every night, but it was completely different when you don’t have judges there and you’re performing for an audience that has come to cheer you on."

For those who were still toddling around in the mid '90s, the "Magnificent Seven" refers to the seven young women who made up the U.S. gymnastics team in the 1996 Olympics in Atlanta. In close competition with the Soviet Union, the team's victory was marked by unforgettable moments: Moceanu's teammate, Kerri Strug, famously secured the American win by landing on an injured ankle, and Moceanu's floor routine to "Devil Went Down to Georgia" is still admired today.

As the team's youngest member — Moceanu was 14 at the time — it's no surprise that she continued training after the '96 Olympics, but a rotating series of coaches and an ill-timed growth spurt left her in a period of upheaval over the next year. "I wanted to do gymnastics, but I wasn't sure who was going to coach me ... It was hard for a while," she explains. "My body went through a lot of change."

Moceanu describes her '97 season as "lackluster," but in 1998, she was back in peak form. That summer, she gave a stellar performance at the Goodwill Games in New York City and became the first non-Russian woman to win the all-around gold medal in the competition. "I felt good about that year. It was a big comeback year for me, to demonstrate that I was still one of the great U.S. gymnasts that could represent our country," she says.

She retired from gymnastics shortly after being forced to withdraw from the 2000 Olympic Trials due to a knee injury. Although she announced a return to the sport in 2005, she left gymnastics once more in 2006 — in terms of competitions, that is. Moceanu remains involved in gymnastics through camps and clinics across the country, and she’s the author of a gymnastics-focused young adult series, Go for Gold, as well as the 2012 memoir Off-Balance .

Moceanu’s professional life may have been exciting, but her personal life has been equally eventful. Her relationship with her parents, particularly her father, was fraught, and a few months after her win at the Goodwill Games, she filed for and received emancipation from her parents at the age of 17. Later that year, she was granted a temporary restraining order against her father. However, she says she reconciled with him before his death in 2008.

“It just took time. It was in different pieces,” she tells Bustle. “I was trying to find out who I was without someone telling me what to do all the time. … Years later I realized he was trying to do his best. He may not have had the right choices or the right tactics or the best approach, and he made mistakes, but he’s also human. At the end of the day, I realized he did care in his own way.”

However, when Moceanu was nine months pregnant in 2007 with her first child, she discovered an enormous family secret: In addition to the younger sister she grew up with, Moceanu had another sister whom her parents gave up for adoption. “It was the biggest shock that I ever had, and I’ve gone through a lot of things already,” Moceanu says.

Born in 1987, before the Moceanus left Romania for the U.S., Jennifer Bricker was adopted by an American family. When she was 20, she contacted Moceanu to see if they could meet. And what's more, gymnastics appears to run in the family — Bricker was born with no legs, but she became a successful gymnast and acrobat before she ever knew she was related to Moceanu.

“It was a really challenging time, but also a time of curiosity and excitement — gaining another sister in our lives,” Moceanu says, adding that the resemblances were apparent almost immediately. "We had similarities in our voices, the way we think about things. It's really interesting learning about each other."

Today, Moceanu is raising two children with her husband, surgeon and former gymnast Michael Canales, in Houston, Texas. In addition to speaking engagements and writing, she has a jewelry line. Oh, and she also remains the youngest Olympic gold medalist in U.S. gymnastics history — no big deal. (Except that it's a very big deal.)

When asked whether she still keeps in contact with her teammates from the '96 Olympics, Moceanu laughs. "We've had three reunions this year," she says. (This year marks the 20th anniversary of their historic win.) Although they don't often see each other all at once, she says the former teammates at least exchange congratulations each year over text. "It's really cool that bond [from the Olympics] has connected us for many years to come."