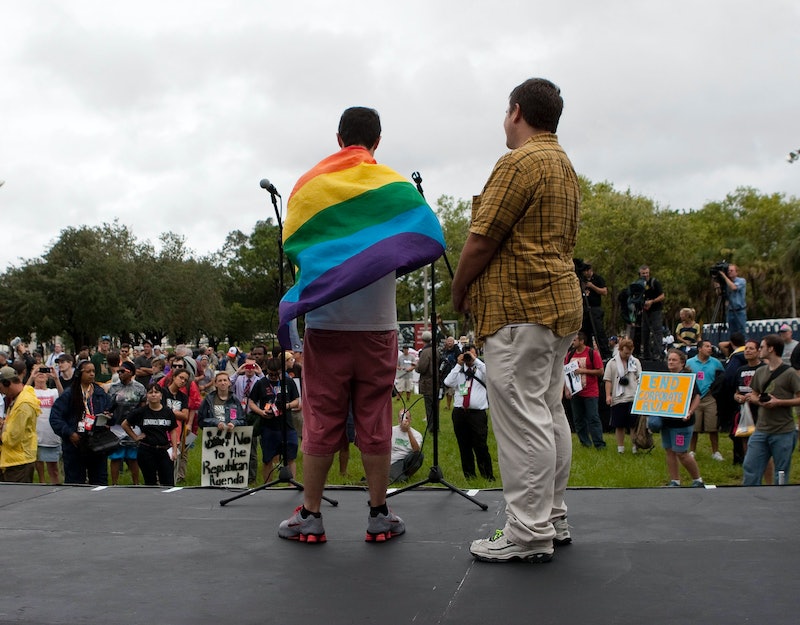 As Peter Thiel proved with his history-making speech Thursday night, there is such thing as an openly gay Republican. In fact, three more of them happened to be in Cleveland for the Republican National Convention this week, casting votes in support of Donald J. Trump. Bustle spoke to Charles Moran last week, one of the three openly gay Trump delegates at the RNC, and he explained why caring about LGBTQ issues and supporting Donald Trump isn't as surprising a combination as you might think.

Moran is a political consultant and head of the California chapter of Log Cabin Republicans, the country’s largest organization of gay and lesbian Republicans. When asked how he came to support Trump, Moran says “looking at my choices, especially when it came down to Kasich, Cruz, and Trump, it was a no-brainer.” What strikes Moran the most was that Trump “never panders,” and he can see how Trump represents the concerns of the average American. Moran did not neglect to echo the common phrase, “He tells it like it is.”

Is being a gay man supporting Trump an absolute shocker to some people he encounters? “Welcome to the story of our lives,” Moran says. According to him, there are many members of the LGBTQ community who would never vote Republican, “even if it was Abraham Lincoln,” and most of the people who are most upset by his specific political predicament fall into that category. However, Moran says, poignantly, “The LGBT community does not vote as a bloc. We are representative of the diversity of American political thought.”

As an individual evaluating presidential candidates, Moran emphasizes that he is not a single-issue voter. He was looking for a candidate that could take the White House based on Republican policies on jobs, the economy, and foreign policy, while staying away from “socially divisive issues.” Moran says it is the former “which I, as an individual and a voter and a Republican want to focus on.” On that account, for Moran, Trump delivers.

“The LGBT community does not vote as a bloc. We are representative of the diversity of American political thought.”

When he does choose to look at LGBTQ issues, Moran says, “Donald Trump has a very good record.” He points to Trump’s philanthropic record — his alleged donations to AIDS research groups in the '90s, and his Mar El Lago resort’s legacy as the first country club to allow LGBTQ couples to join. Moran also references Trump’s meaningful interview with the LGBTQ press when he flirted with running for president in 2000, and his statement that Caitlyn Jenner could use any bathroom she wanted in Trump Tower. Moran says it is this record that “gave me solace, that gave me hope, and he maintained that.”

It turns out Moran was not one of the many who were surprised by Trump's almost progressive reaction to the North Carolina bill (he said they should just “leave it the way it is"). He suggests that Trump is merely one of the first of the party to catch up to the changing times. “I think America is in different place,” Moran says. “I still think there are a lot of Republicans who should get up to speed. In my mind, the Supreme Court has ruled on gay marriage — it is legal. … I think Donald Trump understands and respects that.”

When comparing Donald Trump to Hillary on LGBTQ issues, Moran suggests that examining their records actually helps him out when he appeals to voters to support Trump. Moran points out that Hillary has never voted on a piece of LGBTQ legislation or supported the community (though Clinton has faced criticism for her "evolved" position, during her time in the Senate she did vote against a constitutional ban on same-sex marriage, and supported other legislation that advanced LGBT rights, according to VoteSmart.org). Says Moran, “This is the thing: With Hillary Clinton, she talks a lot. There’s a lot of talk about what she will do or what she supports but with Donald Trump, we see a lot of action — his work as a philanthropist and his work as a businessman. He’s actually done things to advance the community, not just talk.”

One consequential thing Hillary has said she would do in office, however, is nominate a Supreme Court Justice who supports LGBTQ rights. Meanwhile, Trump has made a different claim, saying he’d consider appointing a Supreme Court Justice who opposes gay marriage. Moran is not overly concerned about this. He says, “Luckily, the LGBT litmus test is not the only test that a presidential candidate uses to make (decisions) about who they’re going to nominate.” In comparison, Moran says, “HRC only has one focus, LGBT issues. I get that. I respect that that’s their role in this conversation. But that’s not the only thing someone has to take into consideration.”

Moran's unequivocal support for Trump does not extend to the Republican Party’s platform, called "the most extreme Republican platform in memory" by the New York Times. “There’s some stuff in there I flatly don’t agree with,” he says. But Moran is optimistic. On the possibility of the platform alienating potential voters, Moran says, “I believe it can and will be detrimental, but it just means we have to work extra hard.” He explains that "the Republican candidate does not actually need to support the party platform," and goes on to say even more concisely, “The Republican party is the voters and the candidate — not a document.”

After the watching the dramatic crowning of Donald Trump late Thursday night, LGBTQ advocates can only hope that Moran is right.