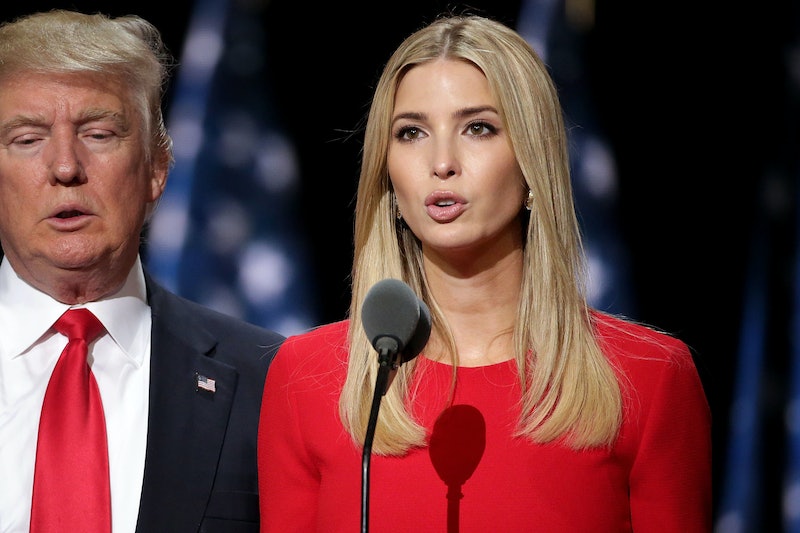 On Thursday night, Ivanka Trump will become the fourth of Donald Trump's children to speak about their father as she introduces the Republican nominee on the final night of the Republican National Convention. In her first major public appearance since her father became a candidate, the transcript of Ivanka Trump's RNC speech shows just how dedicated she is to her father and his campaign.

Ivanka, who works with her father in Trump Tower and runs her own eponymous lifestyle brand, told TODAY that she was nervous about introducing her dad at the RNC and speaking to such a large audience.

I am terrified. I've never spoken in a stadium like this, but really I just want to make sure I do a great job for him. So it's a real honor and a privilege that he asked me to do this, and I think it's a testament to him as a parent.

Ahead of her speech, which marked the fifth Trump family member speech at the convention, Ivanka told reporters that she's proud of her stepmother Melania's speech, despite allegations that her speech was copied from Michelle Obama's 2008 DNC speech of a similar nature. She was also reportedly angered by former candidate Ted Cruz's speech, in which he told delegates to "vote your conscience" and did not endorse his former opponent amid boos from the crowd.

Here's what Ivanka had to say about her father on the final night of the convention.

Good evening. Thank you. One year ago, I introduced my father when he declared his candidacy. In his own way, and through his own sheer force of will, he sacrificed greatly to enter the political arena as an outsider.

And he prevailed against a field of 16 very talented competitors.

Like many of my fellow millennials, I do not consider myself categorically Republican or Democrat. More than party affiliation, I vote on based on what I believe is right, for my family and for my country. Sometimes it's a tough choice. That is not the case this time. As the proud daughter of your nominee, I am here to tell you that this is the moment and Donald Trump is the person to make America great again.

Real change, the kind we have not seen in decades is only going to come from outside the system. And it's only going to come from a man who's spent his entire life doing what others said could not be done. My father is a fighter. When the primaries got tough and they were tough, he did what any great leader does. He dug deeper, worked harder, got better and became stronger.

If it's possible to be famous and yet not really well done, that describes the father who raised me. In the same office in Trump Tower, where we now work together, I remember playing on the floor by my father's desk, constructing miniature buildings with Legos and Erector sets, while he did the same with concrete steel and glass.

My father taught my siblings and me the importance of positive values and a strong ethical compass. He showed us how to be resilient, how to deal with challenges and how to strive for excellence in all that we do. He taught us that there's nothing that we cannot accomplish, if we marry vision and passion with an enduring work ethic.

One of my father's greatest talents is the ability to see potential in people, before they see it in themselves. It was like that for us to growing up. He taught us that potential vanishes into nothing without effort.

And like him, we each had a responsibility to work, not just for ourselves but for the betterment of the world around us. Over the years, on too many occasions to count, I saw my father tear stories out of the newspaper about people whom he had never met, who were facing some injustice or hardship.

He'd write a note to his assistant, in a signature black felt tip pen, and request that the person be found and invited to Trump Tower to meet with him. He would talk to them and then draw upon his extensive network to find them a job or get them a break. And they would leave his office, as people so often do after having been with Donald Trump, feeling that life could be great again.

Throughout my entire life, I have witnessed his empathy and generosity towards other, especially those who are suffering. It is just his way of being in your corner when you're down. My father not only has the strength and ability necessary to be our next President, but also the kindness and compassion that will enable him to be the leader that this country needs.

My father has a sense of fairness that touches every conviction he's hold. I worked along side of him for now more than a decade now at the Trump Organization and I've seen how he operates as a leader. Making important decisions that shape careers and that change lives.

I've learned a lot about the world from walking construction jobs by his side. When run properly, construction sites are true meritocracies. Competence in the building trades is easy to spot and incompetence is impossible to hide.

These sites are also incredible melting pots, gathering people from all walks of life and uniting them to work towards a single mission. There have always been men of all background and ethnicities on my father's job sites. And long before it was common place, you also saw women.

My father values talent. He recognizes real knowledge and skill when he finds it. He is color blind and gender neutral. He hires the best person for the job, period.

Words and promises, no matter visionary they sound will only get you so far. In our business, you're not a builder, unless you've got a building to show for it, or in my father's case, city skylines. Most people strive their entire lives to achieve great success in a single industry.

My father has succeeded in many on the highest level and on a global scale. One of the reasons he has thrived as an entrepreneur is because he listens to everyone. Billionaire executives don't usually ask the people doing the work for their opinion of the work. My father is an exception.

On every one of his projects, you'll see him talking to the super, the painter, the engineers, the electricians, he'll ask them for their feedback, if they think something should be done differently, or could be done better. When Donald Trump is in charge, all that counts is ability, effort and excellence.

This has long been the philosophy at the Trump Organization. At my father's company, there are more female than male executives. Women are paid equally for the work that we do and when a woman becomes a mother, she is supported, not shut out.

Women represent 46 percent of the total U.S. labor force, and 40 percent of American households have female primary breadwinners. In 2014, women made 83 cents for every dollar made by a man. Single women without children earn 94 cents for each dollar earned by a man, whereas married mothers made only 77 cents. As researchers have noted, gender is no longer the factor creating the greatest wage discrepancy in this country, motherhood is.

As President, my father will change the labor laws that were put into place at a time when women were not a significant portion of the workforce. And he will focus on making quality childcare affordable and accessible for all.

As a mother myself, of three young children, I know how hard it is to work while raising a family. And I also know that I'm far more fortunate than most. American families need relief. Policies that allow women with children to thrive should not be novelties, they should be the norm. Politicians talk about wage equality, but my father has made it a practice at his company throughout his entire career.

Americans today need an economy that permits people to rise again. A Trump Presidency will turn the economy around and restore the great American tradition of giving each new generation hope for brighter opportunities than those of the generation that came before. In Donald Trump, you have a candidate who knows the difference between wanting something done and making it happen.

When my father says that he will build a tower, keep an eye on the skyline. Floor by floor a soaring structure will appear, usually record setting in its height and iconic in its design.

Real people are hired to do real work. Vision becomes reality. When my father says that he will make America great again, he will deliver.

We have a chance this year, to reclaim our heritage as a country that dreams big and makes the impossible happen. Fortunately, Donald Trump is incapable of thinking small. When I was a child, my father always told me, Ivanka if you're going to be thinking anyway, you might as well think big. As President, my father will take on the bold and worthy fights. He will be unafraid to set lofty goals and he will be relentless in his determination to achieve them.

To people all over America, I say, when you have my father in your corner, you will never again have to worry about being let down. He will fight for you all the time, all the way, every time.

Maybe it's the developer in him, but Donald Trump cannot stand to see empty main streets and boarded up factories. He can't bear the injustice of college graduates who are crippled by student debt, and mothers who can't afford of the childcare required to return to work to better the lives of their families. Other politicians see these hardships, see the unfairness of it all, and they say I feel for you. Only my father will say, I'll fight for you.

The hard working men and women of this country identify with my father. He is tough and he is persevering. He is honest and he is real. He's an optimist and he's a relentless believer in America and all of her potential. He loves his family and he loves his country with his heart and his soul.

Politicians ask to be judged by their promises, not their results. I ask you to judge my father by his results. Judge his values by those he's instilled in his children. Judge his competency by the towers he's built, the companies he's founded, and the tens of thousands of jobs he's created.

He is the single most qualified serve as chief executive of an $18 trillion economy. My father will call upon the best and brightest people from all spheres of industry and both side of the aisle. A new set of thinkers, to face our countries existing and future problems with fresh perspective and brave new solutions. Come January 17, all things will be possible again. We can hope and dream and think big again. No one has more faith in the American people than my father. He will be your greatest, your truest and your most loyal champion.

This is the fighter, the doer that you have chosen as your nominee, in ways no one expected, this moment in the life of our country has defined a mission and given it to an extraordinary man.

He is ready to see it all the way through, to speak to every man and every woman, of every background, in every part of this great country. To earn your trust and to earn your vote.

He earned that and much more from me a long time ago. I've loved and respected him, my entire life. And I could not be more proud tonight, to present to you and to all of America, my father and our next President, Donald J. Trump.