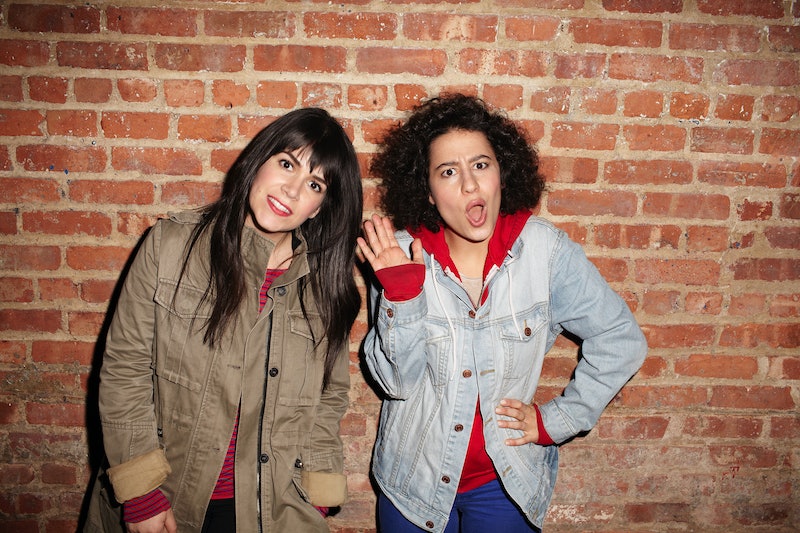 From Broad City's very first episode, the series has been a hilarious and depraved take on life as a 20-something lady living in New York. No, not the way Girls was a hilarious and depraved take on that same tickbox, but an entirely different look because, surprise, surprise, women — even those in the same age bracket and zip code — lead varied lives. Ilana Glazer and Abbi Jacobson threw us head first into this world of odd jobs, weird sex, and Rihanna fantasies and now we never want to leave. And midway through the season, our love is clearer than ever.

Of course, it helped that when the series premiered, we knew that one of our favorite goddesses of comedy, her majesty Amy Poehler, was producing the series — after having appeared in one of the various Broad City web series sketches. Poehler's support alone was enough to carry our affections across the finish line (though the same can't really be said for her boyfriend's The Kroll Show). What's kept us around — and kept me forcing everyone I know to sit down and watch an episode on-demand with me every chance I get — is that the series not only met my Poehler-level expectations, it's exceeded them.

Every episode is laugh-out-loud funny — and not just in the "this looks good on a poster" sort of way. I have paused the television to catch my breath (and to make sure my laughter didn't obscure any future jokes). Broad City is gold and if you haven't caught on yet, here's why you need to leave work, run home, and mainline this series this second so you don't miss out on all the March-y goodness.

Yeah, these girls have one-night-stands and fuck-buddies and exercise all the sexual freedoms of a 20-something woman in New York. But it's not glamorous like some CW version of reality and it's not purposely ugly like Lena Dunham's hyper-realistic depictions of the act. It's the embodiment of the grossly candid discussion you have with your roommate the next day over bloody marys... that you made in your kitchen using ketchup and tabasco because it's almost the same as tomato juice, right? It's simultaneously without glamour and loaded with over-the-top self-confidence.

You know that detail would be priority one over a meal of tater tots and black coffee the next day.

While Girls handles the parts of friendship that hurt and creak, the pieces that often need a little oil and massaging to keep running, Broad City is pure comedy and thus focused on the pockets of pure friendship, like flashing the entire Central Park meadow in order to get your bestie's phone back or helping her through the first time she hides pot in her vagina (alright, I can't say I've done that, but it seemed like solid best friend moment).

Only two people would say something that nice about you: your best friend and the creepy guy cat-calling you in front of a bodega.

Abbi is hopelessly devoted to her dopey neighbor Jeremy, who's nothing special in reality, but is her moon and stars in her head. We've all been there, especially when you live in a building of young attractive folks in your age box. But the downside of love from afar is that you say and think crazy things. Things not even your best friend gets to hear. And Broad City thrives on that sweet spot of every day insanity.

They're like really great at impersonating and naming dogs. I mean look at Judith Light. God, that's uncanny.

Plus, I feel much better now about my own proclivity for laying in the park during warm months, watching the dogs bounce by, and determining their personalities. Beware the Miley Cyrus dog, she's slobber city.

The former SNL writer has shown up onscreen in various places, never really finding a character that strayed far beyond eccentric-and-possibly-homeless-person, but now, after getting to know his dentist and part-time lover to Ilana, it's hard not to love him entirely. You eat that cake, bud. Get it.

6. They're Cool, But Not That Cool

Yes, Abbi and Ilana are cool enough not to be That Girl — the one who showed up in one episode, drunk in the middle of Magnolia Bakery with Abbi's phone in her purse because she's just, well, that girl.

But they're not painfully cool either. They don't have better jobs than you or live more glamorous lives than you do. They're just two cool girls who we can't stop watching every Wednesday night.

May the Broad City era never end, my friends.