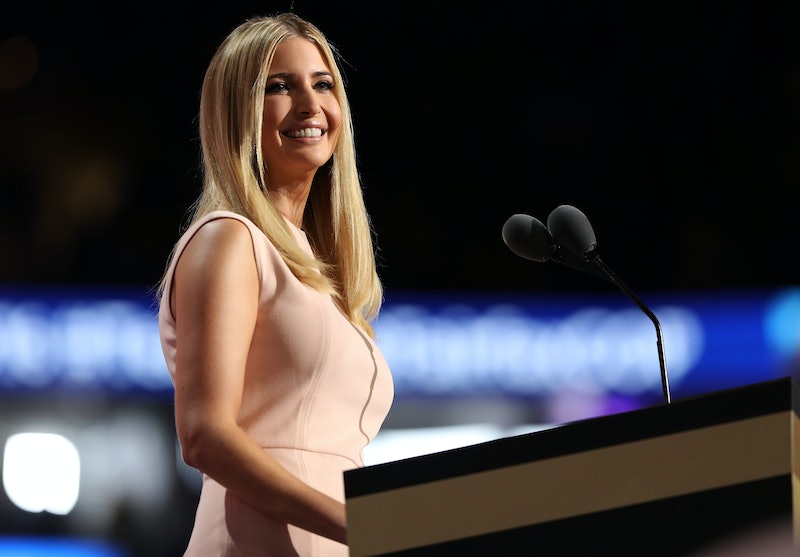 In case you haven't checked any sort of social media, the Republican National Convention is currently taking place, where the official Republican presidential nominee, Donald Trump, is giving (and receiving) lots of speeches. Tonight, Ivanka Trump's RNC dress was a total stunner, rocking one of summer's biggest hues: blush pink.

When she stepped on stage, Ivanka Trump spoke about her father, along with racism and gender equality in the United States, claiming that her father, Donald Trump, has always been "color blind and gender neutral." Trump added that her father "values talent. He recognizes real knowledge and skill when he finds it....he hires the best person for the job, period."

Speaking on behalf of her father and touching on politics hasn't always been the central focus of her professional career, though. Ivanka is a model, working in the fashion industry along with serving as the executive vice president of development and acquisitions for the Trump organization. And, she's even got her own line of accessories and shoes. That's no small feat.

When she was just 17 years old, she actually was the cover star of Seventeen magazine in 1997. Don't be fooled, though — it wasn't just pages in magazines that she appeared on. She even modeled on the runways for Versace and Thierry Mugler, and even appeared in Harper's Bazaar. It's safe to say she's got some footing in the fashion industry.

For this reason, when she stepped onto the podium, it was no surprise that her frock was a total hit. In a simple, blush pink dress, she looked relaxed, comfortable, and totally ready to give her speech. Oh, and by the way, in case you were wondering — it's from her own line. What a good businesswoman she is.

With her hair down, a few pieces of minimal jewelry, and a side slit, I was totally digging her look that was perfectly appropriate for the RNC convention.

Take a look around at your favorite stores, and you'll notice that blush pink is practically everywhere. Bomber jackets, dresses, t-shirts, skirts, hats, and more all come in this light, bright color. It's basically become the newest neutral to hit the stage. Forget blacks, greys, browns, nudes, and whites — blush pink is the new neutral that's taking over the style world. And that, I can't complain about.

Fans loved her dress too:

And while I don't align myself politically with Ivanka and the rest of her family, I can agree that she nailed this look. If she was looking to be relatable and approachable to millennial voters (her speech certainly sounded like it, talking about equal pay), her dress was at least the right choice.

But beyond her choice of clothing, Ivanka certainly has some impressive public speaking skills. Now if only this party can practice what they preach...