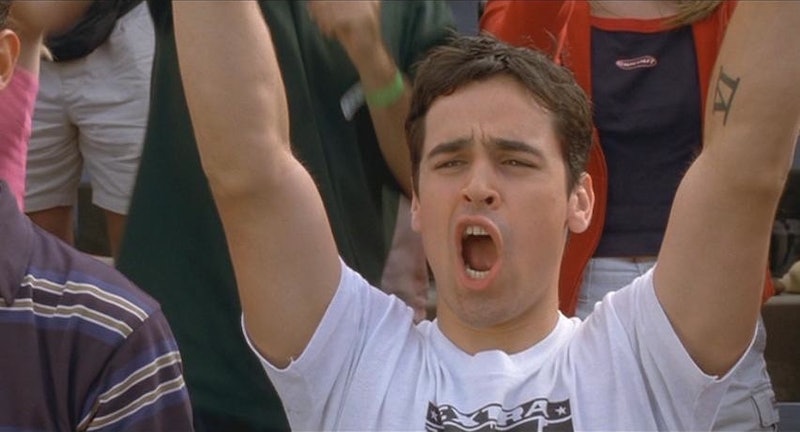 Ah, Bring It On. Everyone's favorite cheer-off was as seminal a part of the year 2000 as the fear that the Millennium Bug would cause an international computer crash and society as we knew it would crumble. But part of the film's immense charm wasn't just its right-on cheerleading (ho, ho) for not plagiarizing other people's work, checking your privilege, celebrating female friendship, and not being sh*tty about things that are intrinsically feminine, like cheerleading. Nope. One major part of the film's charm was Jesse Bradford, who played weird, sweet, supportive Cliff in Bring It On , Torrance's end-of-pic beau.

If you think New Girl played it slow with Nick and Jess, then you should see Bring It On. Talk about your slow burn romances. With all the sexually-charged teeth-brushing going on in the flick, it was a serious relief when Torrance finally ditches her doofus-y, unfaithful college age boyfriend Aaron to get with someone more her own age and pace. This said, Cliff was pretty Brooklyn-esque for a dude who was supposed to be living in the suburbs of California. But, hey. Given that sweetly crooked smile, we'll let him off tiny character development inconsistencies. Here's why Cliff from Bring It On is always and five-ever boyfriend goals.

1. He And His Sister Were Legitimately Good Friends

Sure, they made fun of each other sometimes, but overall their dynamic was sweetly best friends-y. The exact opposite of those bros who act like they're allergic to their family.

2. He Was Supportive Of Torrance's Cheerleading

This is the activity version of wearing pink — showing up at your maybe-almost-girlfriend's cheerleading performances is the dictionary definition of being secure in your masculinity. Fact.

3. He Made Something As Boring As Brushing Teeth Fun

Never getting over this scene.

But he didn't just follow Torrance round; he had his own thing going on, too. Yes, like every other teenage boy in the world, Cliff played geetar and worshipped punk bands.

Obviously, Cliff is a fictional character and Jesse Bradford is an actor and they are not, y'know, the same person. But if they were, you've got to admit, Bradford's not looking bad for 35. The man looks exactly, no, exactly, like a thinner, hipper Colin Farrell.

6. Cliff Made Sure Torrance Didn't Get Too Invested In The Sillier Elements Of Cheerleading

Because it's good to have a passion, but sometimes you need a reality check.

When he witnesses Torrance and the boyfriend he knew nothing about, Aaron, making out, that's it. He hightails it for the hills. He's got no interest in being a homewrecker.

But once Aaron was cleanly out of the picture and Torrance had made that clear, he didn't have any problem with making out at a cheerleading convention. Now listen. Nobody wants PDA all the damn time. But once in a while? Definitely.

9. That Song He Wrote For Torrance Was Fire

"Can't stand your cheerleading squad, but I love your pom-poms... I'd feed you bonbons." Cue punky chorus.

10. He Wasn't Set On Staying In Surburbia Forever

Pure speculation, but no suburban teen buys a t-shirt celebrating Brooklyn's F train without dreaming of a life in New York City, amiright? Unless he was just a huge transport nerd, which would be oddly endearing in itself.

11. He Could Smile Like That Even When Torrance Was Rocking Some Questionable Fashion Choices

The scene: it's 2000, so obviously you're rocking a tomato-red paisley print bandana. You look great, you tell yourself. Not in any way like a peasant-farmer from the 19th century. Nope. You look fly and like a Britney Spears backing dancer. Posterity will prove this not to have been the case, but your other half Cliff will have smiled at you with a cynical mouth and eyes that were full of adoration, so maybe it wasn't so bad?

It was the best of times, it was the worst of times. Torrance would go on to (spoiler!) lose first place at the cheer competition, but win the heart of a guy with eyebrows like handsome caterpillars. No wonder she didn't seem all that depressed at the end of the movie.

More like this
Harry Potter's Viktor Krum Has Undergone A Huge Transformation Since Hogwarts
By Sam Ramsden and Meguire Hennes
The First Look At Halle Bailey’s Ariel In ‘The Little Mermaid’ Has Twitter Hyped
By Brad Witter
Are Quality Time & Gift-Receiving Love Languages Compatible?
By Lexi Inks
The Differences Between Polyamory & Open Relationships
By Lexi Inks
Get Even More From Bustle — Sign Up For The Newsletter