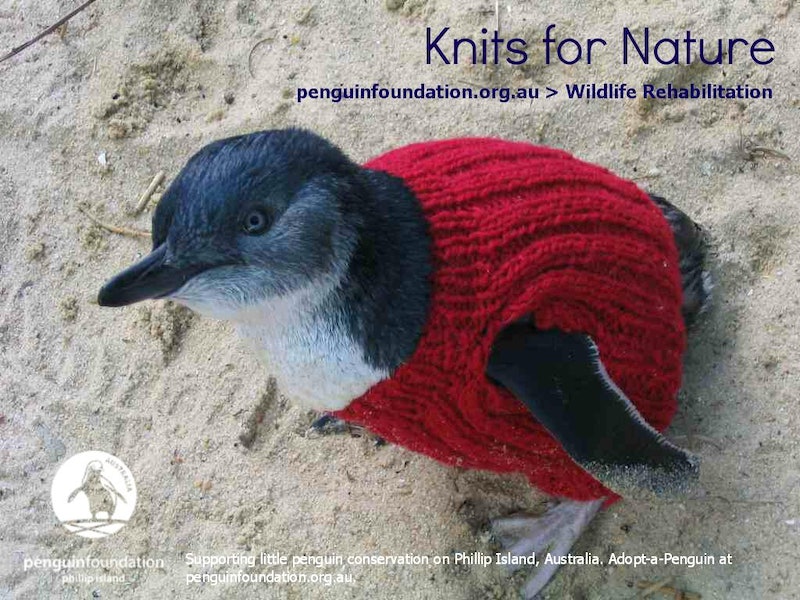 Meet the leading contender for Cutest Story Of The Year: An Australian conservation group is calling all knitters to make sweaters for penguins plagued by oil spills. Let's all take up knitting IMMEDIATELY.

According to the Penguin Foundation, the little penguins — that's actually what the species is called, the little penguin — need the sweaters to keep warm, because getting caught up in oil spills causes them to lose all of their waterproof-ness, which means they get really, really cold. The sweaters also prevent the penguins from trying to clean the toxic oil off themselves with their beaks. What? No, we're not crying, it's allergies!

The Penguin Foundation is based on Phillip Island, which is about 90 miles from Melbourne and has a large penguin colony. The penguin sweater-knitting program began back in 2001 after an oil spill left 438 penguins in need of treatment. But it's not just major spills from big oil tankers that can cause problems for penguins. According to the Phillip Island Wildlife Clinic, a patch of oil the size of a thumbnail has the potential to kill a little penguin, so small oil leaks from fishing boats can also have a serious impact.

At the moment, the Penguin Foundation has a very healthy supply of penguin sweaters because, barring no major disasters, it rehabilitates about 20 penguins per year. The Foundation distributes excess sweaters among other wildlife conservation groups, uses them for educational purposes, and sometimes sells them to raise money.

If you're thinking you'd love to get involved, but you have no idea how to go about knitting a little penguin sweater, then you're in luck: the Penguin Foundation has knitting patterns ! Get to it, people.

In other adorable news Thursday, a seal decided it'd had enough of winter and clambered onto New York's Rockaway Beach to soak up some rays. The New York Police Department called in experts to help the seal, but said experts pointed out that it was perfectly happy, and everyone should leave him alone to enjoy some vitamin D.