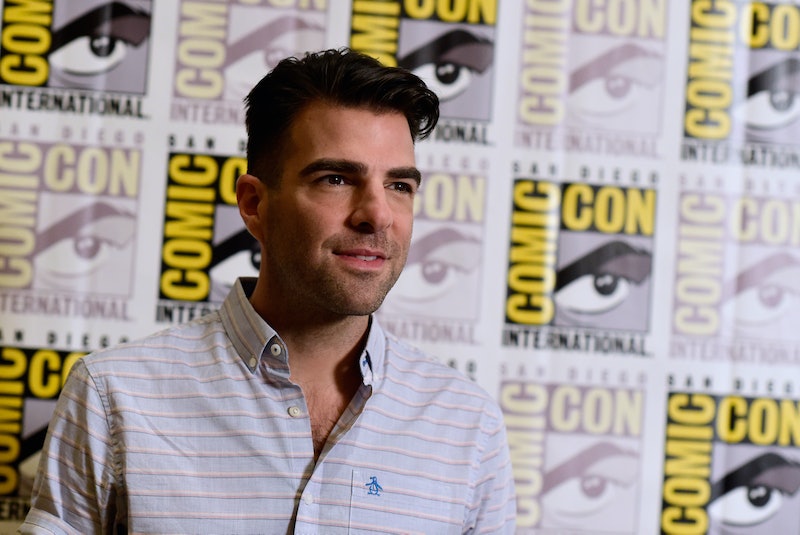 Between running around Comic-Con 2016 with his Star Trek Beyond crew, dodging wedding rumors, and spreading the Schick razor love in San Diego, Zachary Quinto somehow managed to put a pause on the chaos to chat with Bustle. As he promotes the third installment of the beloved Star Trek franchise, it seems that everyone wants a piece of the 39-year-old actor. He’s been particularly vocal about Star Trek ’s first LGBTQ-forward character, he's let his unfavorable opinion on Donald Trump be known, and he's caused speculation by wearing a certain type of ring on a certain finger. But all the actor is trying to do is take pride in his new film and help convention goers remain hygienic under those cosplay costumes with Schick razors.

Star Trek Beyond takes a deeper look at Spock’s love life, and Quinto says his real relationship past hasn’t been too shabby either — with or without a ring involved. In a recent interview with TIME , which points out the interesting dichotomy of Spock’s logic-driven thinking and “illogical” love, Quinto calls the irrational nature of love “so exciting.” That said, the man is admittedly extremely realistic when it comes to relationships.

“What I was talking about in that interview was just the idea of what’s required to commit yourself to somebody, even in very small ways,” Quinto says. The actor, who’s been romantically tied to 27-year-old model Miles Mcmillan for a few years, doesn’t sugarcoat the difficulties we put ourselves through when in love. “[There are] sacrifices that we have to make and the versions of ourselves that we have to be willing to bring to the table in order to sustain a connection with somebody,” he says. “There are different versions of love as well, because there is certainly dysfunctional, unhealthy love in the air.”

All-in-all, though, love has been pretty good to him. “I don’t know, I feel like I’ve been pretty lucky in my relationship life to be able to connect with people in an open and authentic way,” says the actor. Still, one may not find him blasting a boombox to profess his love on a front lawn anytime soon. “I’d like to think I haven’t done things that are too crazy or out the realm of normalcy,” he says.

Regardless of how happy he may be in his personal life, Quinto won’t be blissfully shouting from any rooftops, either. “I think privacy is a very personal choice,” he says. Since the marriage rumors surrounding him and Mcmillan grew rapidly out of Comic-Con, the actor hasn’t given any concrete answers and has been admirably nonchalant about the whole thing. “Everybody has a different relationship to [privacy]. It actually never occurred to me when I put this ring on my finger that it would generate a conversation about the fact that I’m wearing a ring,” he explains. “If I’m gonna make a decision in my personal life, that’s my decision in my personal life still.”

In a world of sensationalized celebrity hype, publicity stunts, and faux relationship drama, Quinto’s point of view is so refreshing.

And he’ll continue to keep those personal choices to himself, as he has every right to. “My boundaries are very clear for myself [to] make those decisions,” he says. The matter is so near and dear to the actor’s heart, in fact, he’s working on a movie all about it: “It’s about invasion of privacy, and for me, it’s not about the personal decisions, it’s about our right to privacy, as a country, our constitutional right to privacy. Our responsibility to protect that.”

Luckily, he has been particularly open about being a gay male in Hollywood, including his thoughts on the decision for Star Trek ’s iconic character Sulu (played by John Cho) to be gay in Beyond:

Last night at the premiere, there were 3,500 people watching the movie; there was a moment that resonates with me. They all erupted to a spontaneous round of applause and that said it all for me. I think there’s been a tremendous outpouring support of this decision and the LGBT community long advocated for representation in the Star Trek universe, making all of us feel honored and proud to be a part of [it].

So for now, Quinto may be found freshly shaved (thanks to his time spent at the Schick Hydro Super Shave Shop on Thursday), relishing in the glory of the Star Trek Beyond premiere, and avoiding answering questions about that mysterious ring — and better yet, not feeling the need to answer them in the first place.