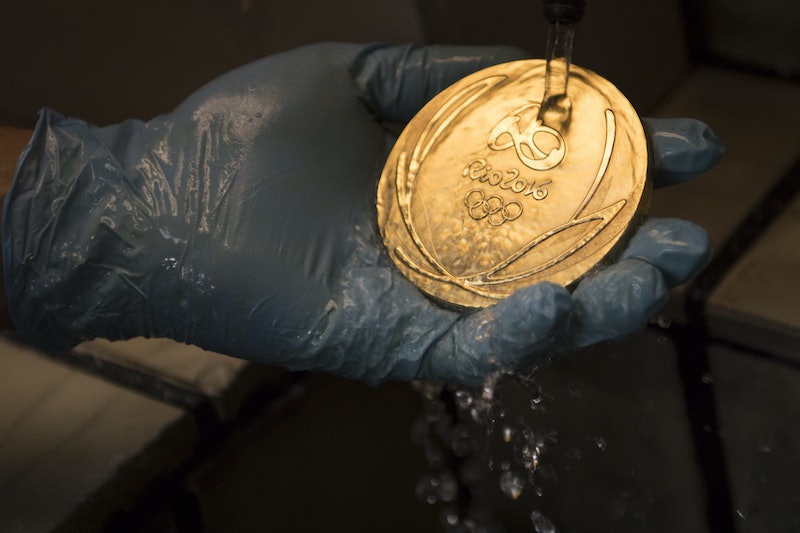 With the Summer Olympic Games just around the corner, many athletes are pushing through their final days of grueling training by dreaming of victoriously biting into their gold medal after it's hung around their neck. Yet dreams of Olympic gold have little to do with a desire for the precious metal, as you won't find a single "gold" medal at the 2016 Rio Games. If Olympic gold medals aren't really gold, how much is a gold medal really worth?

It's been more than a century since solid gold medals were awarded to an Olympic athlete. In fact, they have a relatively short history with the Olympic Games. Solid gold medals first replaced trophies at the 1904 Games in St. Louis but eight years later, the 1912 Stockholm Games became the last time victors' necks were adorned with medals made entirely of gold, due to their high cost of production. Since then, the International Olympic Committee has stipulated that medals awarded to first-place champions contain at least 6 grams of pure gold and use at least 92.5 percent pure silver.

This year's Olympic gold medals, which were produced by Brazil's national mint, weigh just over a pound and contain 494 grams silver, gilded with 6 grams of gold, according to Rio officials. Given gold's current price, that 6 grams of gold plating is worth roughly $268. Between the gold and silver content, an Olympic gold medal awarded at the Rio Games is worth only about $600.

In 2012, gold prices were at a record high, making the "podium value" of gold medals awarded at the London Games roughly $708, according to Forbes. They were believed to be the most valuable Olympic gold medal in the history of the modern games. At today's current market price, a 500-gram solid gold medal would require more than $23,000-worth of the precious metal.

Nearly 2,500 medals have been produced in preparation for Rio's Summer Olympics, along with more than 2,600 Paralympic medals — all using a strict criteria of sustainability. The 812 Olympic gold medals produced by the Brazilian National Mint are made from gold extracted without the use of mercury for a more environmentally friendly medal, according to officials. Inspired by Olympic history, the medals' design features laurel leaves on one side, and Nike, the Greek goddess of victory, standing before Acropolis on the other.

While Olympic champions may not take solid gold medals home with them from Rio, winning remains the ultimate goal. Athletes begin each event determined to go for gold, even if it is just 1 percent.