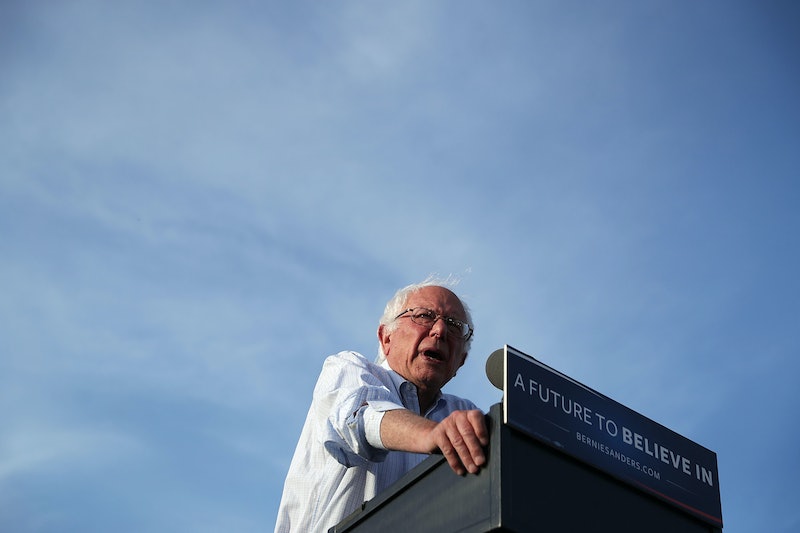 Donald Trump has never talked about Sen. Bernie Sanders as much as he's talking about the former Democratic presidential candidate now. Shortly after Clinton announced Virginia Sen. Tim Kaine as her vice president Trump launched into one of his signature Twitter rants, slamming the presumptive Democratic nominee's decision to appoint a more moderate politician as a slap in the face to Sanders' progressive supporters. But it seems the Vermont senator isn't buying it. Sanders voiced his support for Kaine being Clinton's chosen vice president Sunday, calling him "100 times better than Donald Trump."

Although Sanders recognized his political opinions often fall farther to the left than Kaine's more centrist ones in an interview with CNN's State of the Union on Sunday, he was quick to emphasize his belief that Kaine had much more to offer voters than the Trump's Republican ticket did. "On his worst, worst, worst day, Tim Kaine is 100 times better than Donald Trump will ever be," Sanders said.

Sanders went on to counter some of Trump's recent efforts to woo his supporters away from the Democratic ticket, framing Kaine as a better choice compared to the Republican nominee.

Tim is an extremely bright guy, a very nice guy. Are his political views different than mine? Yes, they are. He is more conservative than I am. But compared to Donald Trump, a guy who rejects science, doesn't even believe that climate change is real, let alone that we have to take bold action to transform our energy system, a Donald Trump who wants to give hundreds of billions of dollars in tax breaks to the top two-tenths of 1 percent, a Donald Trump who goes around the country insulting Mexicans and Latinos and Muslims and women, veterans and African-Americans.

However, while Sanders did come out in support of Democrats' Clinton-Kaine ticket on Sunday in an apparent effort to maintain party unity, he's certainly not lavishing admiration on his Senate colleague. (To be fair, it would seem rather insincere if Sanders had come out singing Kaine's praises) In fact, Sanders openly admitted he would have liked to see a different Democratic senator named as Clinton's running mate in a separate interview also given Sunday.

"I've known Tim Kaine for a number of years," Sanders told Chuck Todd on NBC's Meet the Press. "Tim is a very, very smart guy. He's a very nice guy. His political views are not my political views. He is more conservative than I am. Would I have preferred to see somebody like an Elizabeth Warren selected by Secretary Clinton? Yes, I would have."

For many in the Democratic Party — Sanders included — the thought of Trump in the White House has triggered an aggressive push toward party unity. In even partially supporting Clinton's decision to select Kaine as her running mate, Sanders is showing his supporters that he finds it more important to defeat Trump at the polls in November than quibble over political differences.