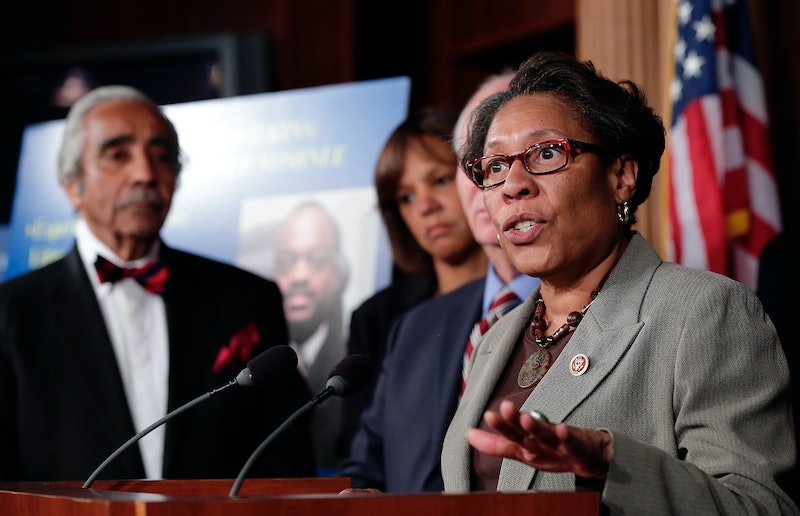 The leaked emails from high ranking members of the Democratic National Committee have caused a huge shift in pre-convention preparations, just before the party gavels its quadrennial meeting into session on Monday. DNC officials removed Debbie Wasserman Schultz as chair of the convention, taking away her ceremonial role to prevent chaos on the convention floor. Bustle has reached out to the DNC for comment. Taking her place as the new chair of the Democratic convention is Rep. Marcia Fudge of Ohio, a fourth-term congresswoman whose leadership record proves she's a great choice for the job.

Hillary Clinton reportedly recommended Fudge for the position, for which Fudge thanked her in a statement released Sunday morning. "I thank Secretary Clinton and her team for recommending me to serve as the permanent chair of the 2016 Democratic National Convention. It is an honor for me and the people of Ohio. I am happy to serve and look forward to a great convention and our ongoing efforts as we work together for a strong party and a successful election. Together we make America Stronger."

The choice has a special, though most likely coincidental, significance to the Republicans — Fudge represents the district where they just had their convention. Fudge was elected to represent Ohio's 11th district after Rep. Stephanie Tubbs Jones unexpectedly died in 2008. During her time in the House, Fudge has fought for education reform as the ranking member on the Subcommittee on Early Childhood, Elementary, and Secondary Education, and led the Congressional Black Caucus from 2012 to 2014.

As with the rest of the House, Fudge is up for reelection this year, and her high profile role at the convention should lock up her race for November. Fudge is already expected to win back her seat over her challenger, Dr. Beverly Goldstein, a former community health activist. Choosing an incumbent Democrat facing a tough race might have been a more strategic move on behalf of the DNC, but Fudge should get a big boost from chairing the convention that will go a long way toward getting her goals accomplished in the next Congress.

Although Fudge's role at the convention will be largely ceremonial, it's another great way for the DNC to highlight the diversity that makes the party so strong and has become a major issue during this election cycle. Fudge is a reminder from the DNC to the delegates, and the country, about why the party has to come together behind the presumptive nominee — the United States can't afford to elect a party and a president that doesn't celebrate and advocate for minority representation and inclusion.