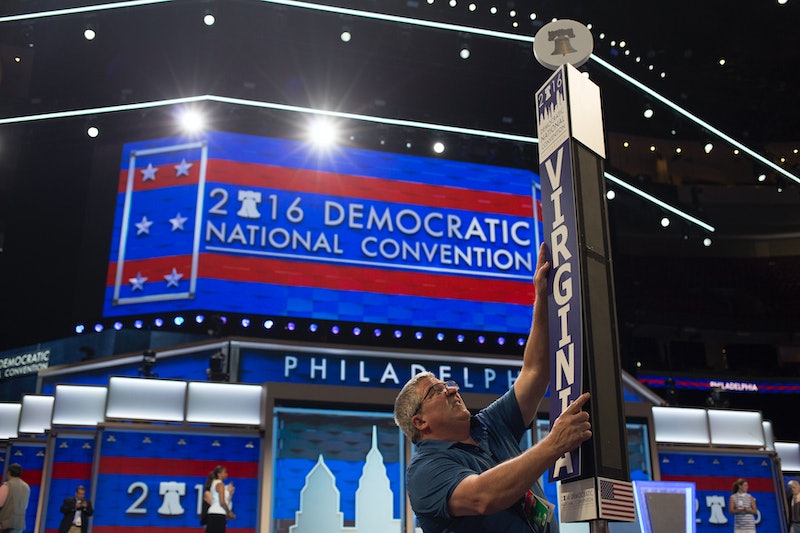 As the lieutenant governor of California pointed out, I don't think we're in Cleveland anymore, Toto. Gavin Newsom tweeted out a photo of the restrooms at the Democratic National Convention in Philadelphia, and there was a sign that said something you'd be hard pressed to find at its Republican counterpart last week. Gender neutral restrooms, it advertised.

Debates have raged for months over who can pee where, and the DNC took a clear stance and made the point that everyone should feel comfortable and accommodated when using the bathroom. Current presumptive-but-soon-to-be-official Democratic nominee Hillary Clinton says on her website that she works to protect transgender rights. Although it doesn't make specific mention of the controversial bathroom bills, it does say, "Hillary will work to protect transgender individuals from violence, make it easier for transgender Americans to change their gender marker on identification documents, and invest in law enforcement training focused on fair and impartial policing, including in interactions with LGBT people."

But as Newsom pointed out, those stances — and those gender neutral bathroom signs — would be very unlikely to be found at the Republican National Convention in Cleveland last week, considering the opinions many conservatives hold.

Republican nominee Donald Trump doesn't much care which restroom people use, as evidenced when he said " People go, they use the bathroom that they feel is appropriate ... there has been so little trouble." But that's an opinion not everyone in his party shares.

Ted Cruz, for example, released an entire video called "Appropriate" that was dedicated to offensive fearmongering about "grown men" using the same restroom as your daughter and wife, saying it's inappropriate and unsafe to allow transgender women to use the women's restroom. He, of course, blamed it on political correctness.

And it's been Republicans who have pushed for these bathroom bills, though Peter Thiel stood in a room full of thousands of Republicans at last week's conventions and called the legislation attempts a "distraction" and a "fake culture war."

But other than Thiel's mention, that's really all the progress the RNC made when it came to gender inclusive bathrooms. The Democratic convention, on the other hand, will feature the first transgender person to ever speak at a major party convention. As the sign indicated, the DNC is clearly leaps and bounds ahead on this topic.