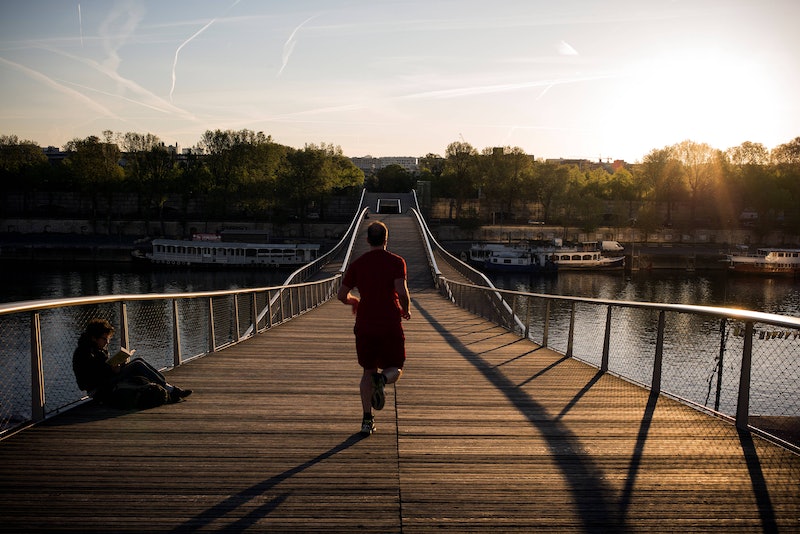 On the surface, running and writing have little in common; perhaps, though, they seem so different and separate because there was never really an occasion within which to put the two together. It wasn't until I read Haruki Murakami's aptly titled What I Talk About When I Talk About Running that it started to make sense to me. Talking about running, normally, would be dreadfully dull for anyone other than avid runners, but Murakami, as he always does, writes so masterfully that this book is readable and enjoyable to a much wider audience.

The thing about Murakami is that he writes in such a real, digestible, and non-elite manner, but he still manages to find extraordinary ways to capture words for thoughts, feelings, and situations that feel impossible to describe. He does so without dragging his ideas on and he does so without intellectual cockiness. Yet there is still a careful, artistic hand at work on every page. You're probably thinking this is big praise for a guy who wrote a book about running, but what he did in the book was so powerful that he's worth every syllable of it.

Murakami starts early in the book by talking about how running helped him combat the loneliness that comes with being a dedicated writer. He writes:

"In certain areas of my life, I actively seek out solitude. Especially for someone in my line of work, solitude is, more or less, an inevitable circumstance. Sometimes, however, this sense of isolation, like acid spilling out of a bottle, can unconsciously eat away at a person's heart and dissolve it. You could see it, too, as a kind of double-edged sword. It protects me, but at the same time steadily cuts away at me from the inside. I think in my own way I'm aware of this danger -- probably through experience -- and that's why I've had to constantly keep my body in motion, in some cases pushing myself to the limit, in order to heal the loneliness I feel inside and out to put it in perspective. Not so much as an intentional act, but as an instinctive reaction."

He elaborates on this concept of writing as an unhealthy habit in a really powerful way, digging into how society itself perpetuates some interesting (for lack of a better word) tropes in writing. It puts readers in a position where they're challenged, or maybe encouraged, to think about how writing affects them. (Note: Murakami uses 'himself,' where a gender neutral word would have been more appropriate.)

"While I was running, some other thoughts on writing novels came to me. Sometimes people will ask me this: 'You live such a healthy life every day, Mr. Murakami, so don't you think you'll one day find yourself unable to write novels anymore?' People don't say this much when I'm abroad, but a lot of people in Japan seem to hold the view that writing novels is an unhealthy activity, that novelists are somewhat degenerate and have to live hazardous lives in order to write. There's a widely held view that by living an unhealthy lifestyle a writer can remove himself from the profane world and attain a kind of purity that has artistic value. This idea has taken shape over a long period of time. Movies and TV dramas perpetuate this stereotypical -- or, to put a positive spin on it, legendary -- figure of an artist.

Basically I agree with the view that writing novels is an unhealthy type of work. When we set off to write a novel, when we use writing to create a story, like it or not a kind of toxin that lies deep down in all humanity rises to the surface. All writers have come face-to-face with this toxin and, aware of the danger involved, discover a way to deal with it, because otherwise no creative activity in the real sense can take place. (Please excuse the strange analogy: with a fugu fish, the tastiest part is the portion near the poison -- this might be something similar to what I'm getting at.) No matter how you spin it, this isn't a healthy activity."

Throughout the novel, Murakami explicitly and subtly makes the suggestion that writers need to balance the toll of writing with some sort of enriching, beneficial element, that with poor wellness and self-care you will be unable to last long in writing and/or create anything of substantial character. He says this without the sort of condescension-flavored gusto which may come across when the idea is summarized. One of the most poignant messages throughout the novel is that writing involves more than just sitting down and writing a masterpiece, and that, as a lifestyle, it's much harder than it looks on TV. Without effort and care, the toxin of writing will take you quickly.

Despite the fact that writing physically requires little more than being able to sit up straight — and even that's negotiable — those with poor wellness will never be able to make a solid career of writing, or at least not a wholly fulfilling one.

"But those of us hoping to have long careers as professional writers have to develop an autoimmune system of our own that can resist the dangerous (in some cases lethal) toxin that resides within. Do this, and we can more efficiently dispose of even stronger toxins. In other words, we can create even more powerful narratives to deal with these. But you need a great deal of energy to create an immune system and maintain it over a long period. You have to find that energy somewhere, and where else to find it but in our own physical helping?

To deal with something unhealthy, a person needs to be as healthy as possible. That's my motto. In other words, an unhealthy soul requires a healthy body."

The wellness he references can be reached in any number of ways and is certainly not limited to physical activities. Meditation, journaling, listening to or playing music, and doing puzzles are just a few of the ways you can find some much-needed peace and escape.

Towards the middle of the memoir, Murakami gives a large credit to running in his professional writing career. It furthers the point that running can be, for a writer, not only a means to find balance, but also a guiding force for one's writing.

"Most of what I know about writing I've learned through running every day. These are practical, physical lessons. How much can I push myself? How much rest is appropriate -- and how much is too much? How far can I take something and still keep it decent and consistent? When does it become narrow-minded and inflexible? How much should I be aware of the world outside, and how much should I focus on my inner world? To what extent should I be confident in my abilities, and when should I start doubting myself? I know that if I hadn't become a long-distance runner when I became a novelist, my work would have been vastly different. How different? Hard to say. But something would have definitely been different."

There is significantly more moving content in the book, but I'd be irresponsible to try and roundup every thought-provoking tidbit. The only way to end this, is, ironically enough, a small segment from the beginning of the book. It is there that Murakami talks about how writing, like running, is not really something you can "win," a reminder to all of us that life is more about goals than some sort of society-constructed idea of winning or being better than other people. (Note: Murakami again uses the presumptuous 'he' to speak of general runners.)

"Most ordinary runners are motivated by an individual goal, more than anything: namely, a time they want to beat. As long as he can beat that time, a runner will feel he's accomplished what he set out to do, and if he can't, then he'll feel has hasn't. Even if he doesn't break the time he'd hoped for, as long as he has the sense of satisfaction at having done his very best -- and, possibly having made some significant discovery about himself in the process -- then that in itself is an accomplishment, a positive feeling he can carry over to the next race.

The same can be said about my profession. In the novelist's profession, as far as I'm concerned, there's no such thing as winning or losing. Maybe numbers of copies sold, awards won, and critics' praise serve as outward standards for accomplishment in literature, but none of them really matter. What's crucial is whether your writing attains the standards you've set for yourself. Failure to reach that bar is not something you can easily explain away. When it comes to other people, you can always come up with a reasonable explanation, but you can't fool yourself. In this sense, writing novels and running full marathons are very much alike. Basically, a writer has a quiet, inner motivation, and doesn't seek validation in the outwardly visible."

Murakami, and his running/writing memoir, are pure genius. I'd always thought running was silly, but, sure enough, I'm looking into running shoes right now.

More like this
Zosia Mamet Opens Up About Her Eating Disorder
By Zosia Mamet
The 20 Best Audiobooks To Fall Asleep To
By Aoife Hanna and K.W. Colyard
10 Must-Read New Books Out This Week
By K.W. Colyard
Conversations With Friends' Endometriosis Scenes Are As Brutal As It Gets
By Ivana Rihter
Get Even More From Bustle — Sign Up For The Newsletter