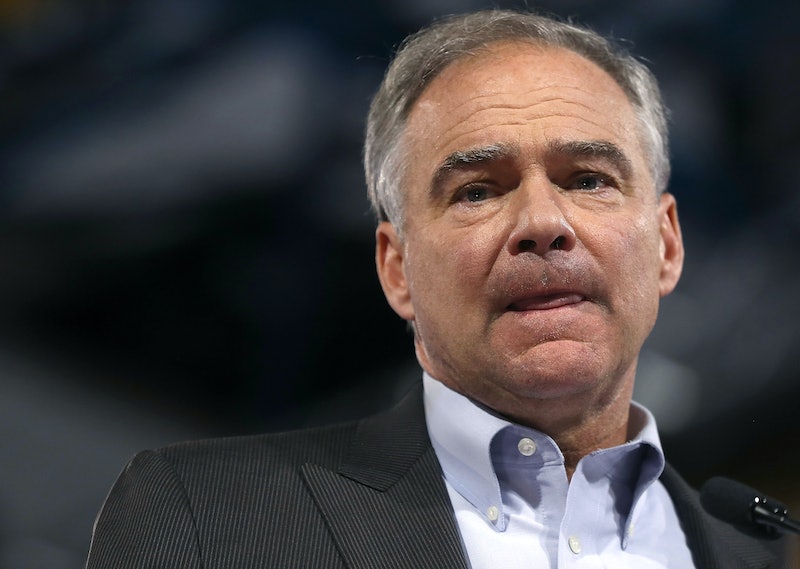 If Hillary Clinton's Democratic Party is successful in November, it means that not only would America get its first female president, we'd also get back-to-back Catholic vice presidents, as well. Tim Kaine could be the second Catholic veep in a row — but just how much does he have in common with Joe Biden's brand of Catholicism?

The headline of an article from Michelle Boorstein and Julie Zauzmer at The Washington Post proclaimed Kaine to be "a Pope Francis Catholic." In fact, on the matter of abortion, he was compared to fellow Catholic Democrats Biden and John Kerry as the kind of Catholic who, while holding the teaching of the Church close to his hearts, wouldn't dream of legislating his own personal religious beliefs on abortion into law. Variations on this theme — which require Catholic politicians to disavow the more strident matters of their religious dogma in order to appear mainstream and electable — have been used since John F. Kennedy's first presidential run.

Yet there are some hints that Kaine may be fundamentally somewhat more conservative than Biden. While the devout Catholic was educated at Jesuit schools — generally thought of as the more free-thinking, progressive of the various Catholic sects — Kaine spent a gap year away from Harvard working as a missionary in Honduras. According to Karen Swallow Prior, a professor at Liberty University in Virginia who was quoted extensively in the article, Kaine's "faith background" is perceived as "authentic" by Christian voters, perhaps in a way that Biden never attempted to cultivate.

While Biden hasn't ever shied away from identifying as a practicing Catholic, he has definitely followed the tried-and-true model for Democratic Catholic politicians looking to come across as mainstream, social moderates. For one thing, he hasn't been shy when it comes to praising the papacy of Pope Francis. He said:

He's the embodiment of Catholic social doctrine that I was raised with. The idea that everyone's entitled to dignity, that the poor should be given special preference, that you have an obligation to reach out and be inclusive.

But Biden went a step further, praising the pontiff for his leadership on the global problem of climate change, during an interview with The Washington Post.

The way I read it — and I read it — it was an invitation, almost a demand, that a dialogue begin internationally to deal with what is the single most consequential problem and issue facing humanity right now.

Whether or not Kaine would openly embrace the same aspects of Pope Francis' theology as Biden should he become the vice president remains to be seen. Despite their surface similarities, at the end of the day, Biden and Kaine are two different people, and two different politicians.