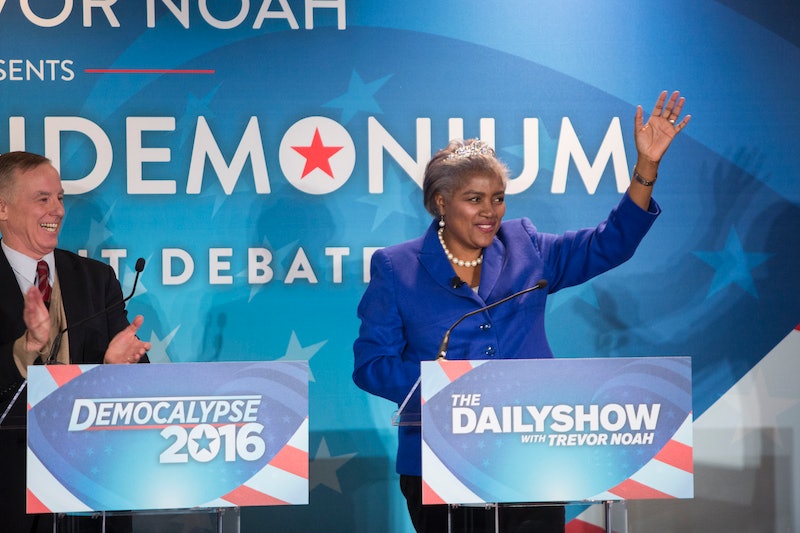 Some supporters of Bernie Sanders have been calling for Debbie Wasserman Schultz's resignation since the beginning of the primary season, claiming that the Democratic National Committee was biased towards supporting Hillary Clinton. So now that leaked emails have shown DNC staffers speaking ill of Sanders and his campaign, Wasserman Schultz is out the door. She'll be replaced by Donna Brazile, a CNN commentator and longtime political insider. So, is she so different? And does she know Clinton? Well, Donna Brazile and Hillary Clinton have connections that go way back.

Brazile got her start with politics back in the 1970s. First, she worked on a city council campaign to win a playground in her hometown of Kenner, Louisiana, then, as a teenager, she volunteered for Jimmy Carter's campaign. Since then, she hasn't stopped: She has grown to be one of the more influential Democrats behind the scenes in Washington. She worked on the Michael Dukakis campaign in 1988, but was fired when she suggested that George H.W. Bush needed to "fess up" about extramarital affair rumors that were circulating at the time.

Brazile's next job was for none other than Bill Clinton. According to USA Today, in 1992, she was a "senior adviser on black voter turnout for [the] Clinton-Gore campaign." Then in 1996 she worked as the "District of Columbia campaign director for [the] Clinton-Gore campaign." Those jobs turned into work on Al Gore's 2000 campaign as the former vice president's campaign manager.

Other ties include work for the Democratic Leadership Council in the 1980s, The Huffington Post reported. The group, consisting of centrist, conservative, and moderate Democrats (sometimes called "Blue Dog Democrats") — among them, Bill Clinton — was started in 1985 to pivot the Democratic Party away from unions and urban voters to embrace "Reagan Democrats," who were being picked off by the Republicans.

So the idea that Brazile will be so different from Wasserman Schultz is a bit of a stretch. And there are conflicting reports. She has been supportive of Sanders — at least more so in public. In September, she tweeted out some articles on Sanders and used several of the Vermont senator's famous hashtags. Privately, there were emails between Wasserman Schultz and Brazile that implied she was a Clinton supporter back in May, before the primaries were over. These were also released by Wikileaks.

In general, she has been more supportive of Clinton this go around than in 2008, when she said that some of Bill Clinton's attacks on Barack Obama were racially insensitive. Even before Clinton announced her candidacy, Brazil wrote a CNN commentary piece that lauded Clinton for embracing her gender more in the race. She's also been tweeting up a storm about Clinton ever since she entered the race.

It is what she does now, though, that will matter most. Before she was appointed the interim DNC chair (which will last through the election), she did speak with Sanders to try and mend things. "I went over yesterday to see the Sanders campaign [and] I apologized. I think, the allegations, the e-mails, the insensitivity, the stupidity needs to be addressed," Brazile said on Sunday's episode of This Week.

She also took a break from her contract as a paid contributor for CNN. They will revisit the contract after she steps down following the election. There's no doubt that she's pro-Hillary, especially now that Clinton has clinched the nomination. The question now is whether she can get Bernie Democrats on board.