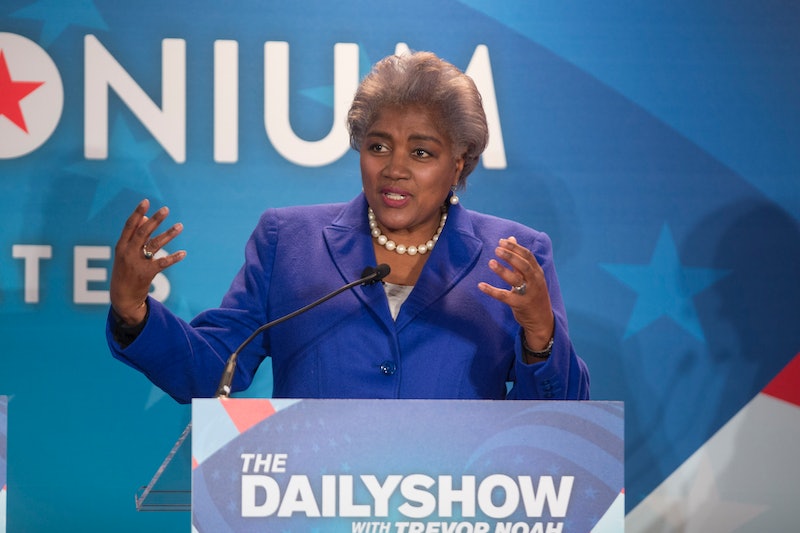 Amid allegations that the Democratic National Committee repeatedly spoke of Hillary Clinton's primary opponent, Sen. Bernie Sanders ,in a derogatory fashion, DNC Chair Debbie Wasserman Schultz has announced that she will step down from the role following her party's convention this week. CNN Correspondent Donna Brazile will take her place as interim chair for the remainder of the election, a role that she had previously held in 2011. Now with Wasserman Schultz out, voters can look to Brazile's harsh words on Republican presidential nominee Donald Trump to see how she may steer the Democratic party until the November election.

The announcement of Brazile's new role came on the heels of an alleged internal struggle within the DNC, after WikiLeaks uncovered a series of emails that pointed to the committee's attempts to undermine and belittle Senator Sanders' presidential campaign. Though Sanders said that the emails were "outrageous," the former candidate said they did not come as "a great shock" to the him. Nevertheless, he successfully bid for Wasserman Schultz's resignation.

After the DNC officially hands the nomination over to Clinton at the end of its convention on Thursday, Brazile's role as interim chair will begin. Her job will then be to steer Clinton and the party to a victory over Trump come November. The soon-to-be former DNC chair greatly disliked Trump, and Brazile's previous comments on the presidential candidate likewise fall in step with those sentiments.

On a March appearance of ABC's This Week with George Stephanopoulos, Brazile made clear her thoughts on the Republican nominee. Stephanopoulous' panel was discussing whether Trump could be rightfully blamed for the outbreak of violence at his rallies, which Brazile believed he had "perpetuated with his angry rhetoric."

Donald Trump is amplifying everything that we've heard on talk radio for the last eight years. ... There's not one AM channel, whether I'm home in the South or riding up into the Northeast, they've been saying this kind of dog whistle, you know, everybody is the problem and people have not taken responsibility. ... And he knows exactly what he's doing. This is not the Donald Trump who denounced David Duke in 1991. This is a guy who is now soaking up this hate and he's spilling it back out.

The new interim chair also had plenty to say during Trump's seemingly never-ending acceptance speech last week. Before tweeting out a photo that announced the end of the Republican Party ("RIP GOP, 1854-2016"), Brazile commented on Trump's convention address:

As can be gathered, Brazile obviously — and with good reason — doesn't take kindly to the Democratic Party's opponent. From calling out his rhetoric for being a "dog whistle" for violence and his acceptance speech "uninspiring and rambling," Brazile shows she will hit Trump just as hard as her predecessor in the months leading up to the election.