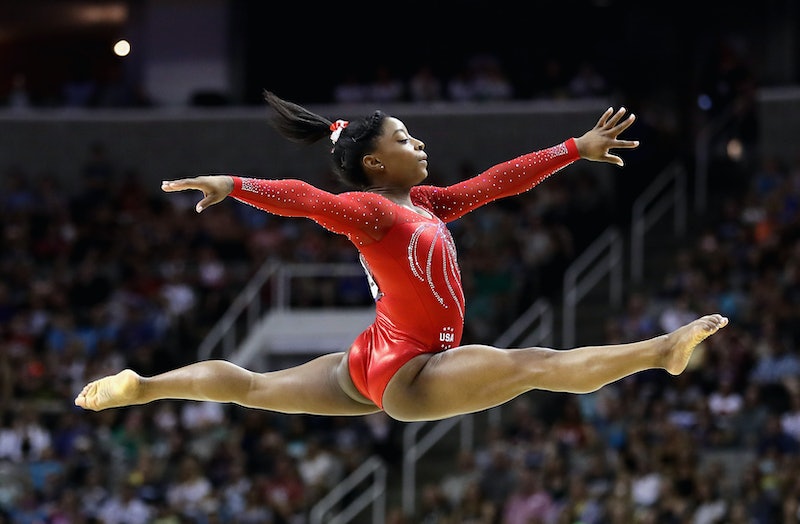 There is so much buzz about Summer 2016 Olympian Simone Biles it is unreal. While Women's Gymnastics is always one of most highly-watched sports at the Olympic Games, the attention surrounding 19-year-old Biles — a record-breaking consecutive four-time National Champion who will be competing in her first-ever Olympics this year — is on another level. Repeatedly referred to in terms like "world's greatest gymnast" by her fellow gymnasts and previous Olympians, the 4'9" powerhouse is set to help this year's Fierce Five score some serious Olympic gold. While #TeamUSA gears up for the start of the Games on Aug. 5, gymnastics fanatics should get prepped on everything we can expect from Biles this season. Namely, familiarizing ourselves with Simone Biles' best event.

According to the New Yorker, which has an in-depth profile of the Olympic gymnast that is definitely worth a read, Biles is set to dominate in just about every routine — but particularly the all-around competition.

"Biles will be the overwhelming favorite on both the floor and the balance beam, as well as in the all-around competition, where her combined level of difficulty is so much higher than that of her competitors that the Gymternet believes she could fall twice and still win gold," the mag reports, noting that "she is unlikely to win a medal on the uneven bars, which is her weakest event — she once finished fourth at the World Championships — meaning that the most serious obstacle on her quest for five golds is the vault."

USA Today also backs up the all-around claim: "Biles is expected to win the all-around," stated writer Maggie Hendricks. "She also has the scores to win vault, beam and floor exercise."

And her own gymnastics history should speak for itself: Biles is the three-time all-around World Champion and four-time all-around U.S. Champion — and all of those gold medals were consecutive. In her own words, Biles' favorite event is the floor — which Vox claims is her all-time best.

To fully understand Biles' power — even for someone who is just a casual fan, like me (though I get rabid once the Olympics start) — is to watch video footage of any of her routines.

Biles' sheer strength — which is evident in the height of her flips and jumps and the unbreakable poise in which she does it all — is unmatchable. It's why her Team USA teammate Aly Raisman (who won gold at the 2012 Olympics and is the captain of this year's team), remarked to the New Yorker: "All the girls are like, ‘Simone’s just in her own league. Whoever gets second place, that’s the winner,'" she said.

Of course, it makes sense that Biles is coming for that all-around crown (her teammate Gabby Douglas will defend her title this year; she won the all-around gold medal at the 2012 Olympics).

Not only does Biles have more gold medals than any other gymnast ever, she has won the all-around gold medal at the World Championships for the past three years. And if Biles is truly the best at her craft — which it certainly seems like she is — it makes sense that it will come through in the coveted all-around final, where she will show off her power on the floor, beam, vault, and uneven bars.

Go for the gold, Biles. The world — and particularly this writer who will be living vicariously through the gymnast's incredible athletics — will be cheering.