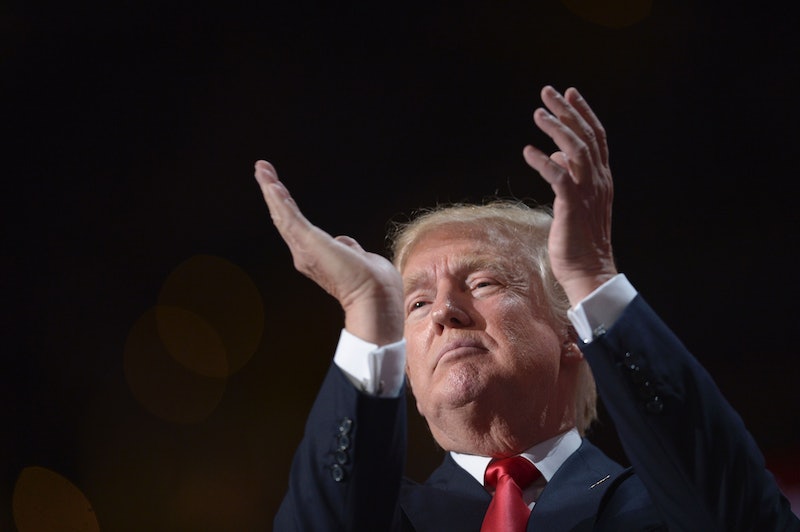 Donald Trump is tweeting up a storm — this time, about the Democratic National Committee emails leaked last week. On Monday morning, Trump continued tweeting about the DNC email leak, using the emails as evidence that his opponent, Hillary Clinton, really is "crooked" ("Crooked Hillary" is The Donald's preferred name for Clinton on Twitter). Trump began tweeting about the event again early Monday morning, and continued to sporadically tweet about the emails over the course of a few hours — it seems as if the DNC email leak gave Trump perfect fodder for his constant Twitter campaign against Clinton, since he's used the scandal to bring up all of his favorite (anti-Clinton) subjects.

The New York Times explains that the DNC email leaks apparently prove that the DNC favored Clinton over Bernie Sanders, and led to the resignation of DNC chair, Debbie Wasserman Schultz on Sunday night. Trump is, of course, using the emails to his own advantage — to further his accusations that Clinton is corrupt.

One of Trump's first tweets of the morning read, "Hillary was involved in the e-mail scandal because she is the only one with judgement so bad that such a thing could have happened!" — Trump often claims that his opponent has "bad judgement," and seemingly uses the phrase in every possible circumstance.

Trump also wanted to make sure his followers tied Clinton herself to the DNC leadership, and tweeted, "Crooked Hillary Clinton knew everything that her 'servant' was doing at the DNC - they just got caught, that's all! They laughed at Bernie." Clearly, the DNC email leak has made it even easier for Trump to accuse the DNC of favoring Clinton over Sanders.

Oddly enough, Trump often tweets sympathetically about Sanders, siding with Sanders supporters who think the election was rigged against the Vermont senator — though it's clear he does so in order to attract Sanders supporters to the Trump campaign. Obviously, the DNC email leak allowed Trump to tweet about the supposedly unfair treatment of Sanders again.

However, it also seems as if Trump has turned on Sanders after the former Democratic candidate reacted to the DNC email leak, himself. On Monday morning, Trump tweeted, "If Bernie Sanders, after seeing the just released e-mails, continues to look exhausted and done, then his legacy will never be the same." It seems as if Trump is now suggesting that Sanders is, well, weak — which is one of Trump's favorite Twitter insults.

Trump also used the DNC email scandal to remind voters about other Clinton scandals — including the FBI investigation into Clinton's personal email server. Trump tweeted, "Here we go again with another Clinton scandal, and e-mails yet (can you believe). Crooked Hillary knew the fix was in, B never had a chance!" — ensuring that his followers have not forgotten that Clinton has had other issues when it comes to emails.

Trump's ability to attract media attention without paying for traditional campaign advertisements is well-known, and the GOP nominee's often-outrageous Twitter account is just another way in which the Trump campaign receives media attention without having to spend campaign funds. It's hardly surprising that Trump is using the DNC email leaks in his campaign against Clinton — the emails made it all too easy for Trump to bring up all his favorite topics, and condemn his opponent.