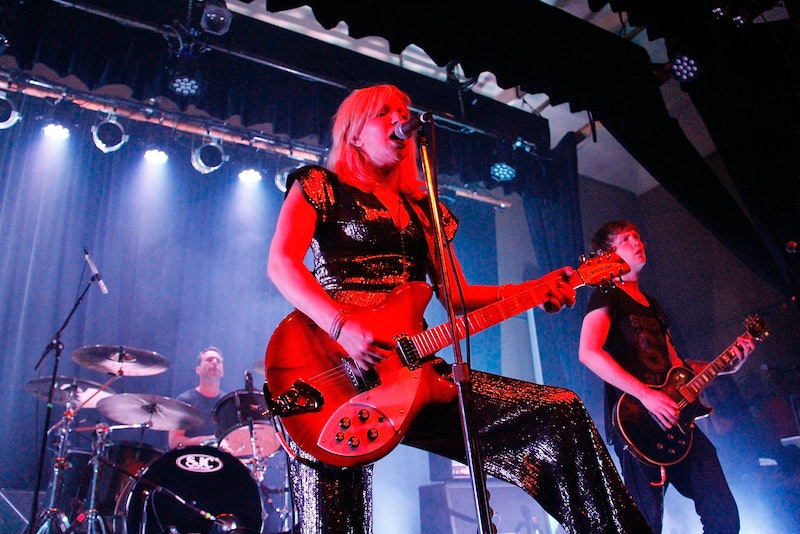 Ever wanted to see Courtney Love break music equipment with a sledgehammer? My guess is, you could roll to her place on a Wednesday night — or, if that sounds too taxing, just watch the new Fall Out Boy music video for "Rat-A-Tat," featuring the one and only former Hole frontwoman as the villain. This video is the band's ninth out of eleven in a series planned to correspond with their comeback album Save Rock and Roll featuring a rather on-the-nose storyline about the Boys taking down a music-hating proto-fascist tyrant — played here by Ms. Love. The song itself isn't anything to write home about, in my humble opinion (plus, fellow power-emoers My Chemical Romance did the whole post-apocalyptic concept album deal four years ago, and at least theirs had goofy party masks). However, Courtney Love Courtney-Loving it up is always worth noting. Sure, her make-up is securely around her eyes the whole time, clothes fully intact — but from the moment she steps in and declares "It's Courtney, bitch" on forward, the video is chock full of moments for which she is singularly perfect. Here are five of them:

1. She Has an Angry Girl Army

The premise of the video is that Love is the leader of an army of young women, complete with their own anti-music iconography, who spend the better part of the clip straight-up smashing instruments and LPs. Part of me thinks this could be interpreted as a backdoor diss, like when Kevin Smith cast Alanis Morissette as God in Dogma ("Her voice makes your ears explode! Har har!"), implying that Love played a part in bringing about the rock apocalypse. Still, the fact remains that, in real life, Love also has an angry girl army, and they are called Hole fans — AKA, me, ages 12 to now. I mean, who among us hasn't shattered a guitar or two while blasting "Celebrity Skin"? (Okay, I couldn't actually afford to destroy my guitar, but I totally pummeled the hell out of my pillows. That down was never the same, I tell you — never.)

2. She Brainwashes a Band Frontman

Just as many a Lennon fan cast aspersions on Yoko, there are plenty of Kurt Cobain devotees who think none too highly of his former wife. So, when Love takes Fall Out Boy frontman Patrick Stump into a back room and zombifies him into instrument-smashing with her, it's hard not to have a few flashes of the rumors surrounding the Nirvana frontman's tragic and untimely demise, whether or not you believe the hype.

Because of course she does. This one doesn't actually take place in the video (Love is too busy breaking things), but it's worth keeping in mind while you watch that the Fall Out Boy bassist and notorious emo-hair model told Rolling Stone that "When [Love] walked into the room she commanded it. Turns out the bullhorn was not necessary. Note to self: stay on Ms. Love's good side." Understatement of the century, Petey boy.

4. She Blows Them All a Kiss

... after having her minions slash the throat of drummer Andy Hurley — proudly displaying her inner-right-bicep-spanning "Let it Bleed" tattoo as he proceeds to do just that, profusely, from his jugular. All in a day's work.

In her opening manifesto voiceover, Kaiser Love declares, "We are every old broken toy, born again and again" — and I just about died. Then, I went and put on "Doll Parts" and cried eyeliner all down my face, because, yes. Someday, we all will ache like you ache, Courtney!

More like this
Bridgerton’s Simone Ashley Stars In ODESZA's "Love Letter” Music Video
By Radhika Menon
5 Times Blue Ivy Has Been Featured In A Beyoncé Song Or Music Video
By Radhika Menon
Courtney Cox Shared A Super Cute IG Post For Her Boyfriend’s Birthday
By El Hunt
Now That 'Renaissance' Is Here, Let’s Revisit Beyoncé’s First Solo Album From 2003
By Grace Wehniainen
Get Even More From Bustle — Sign Up For The Newsletter