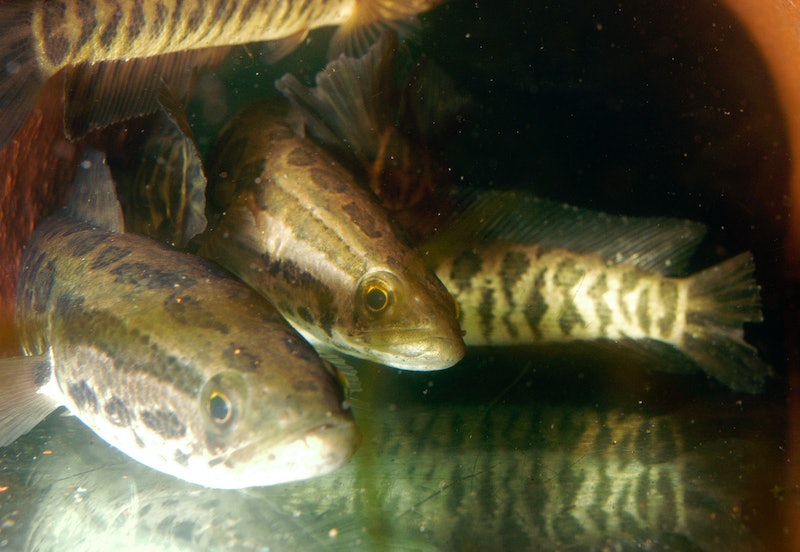 What's the scariest possible combination of two creatures? If you were thinking "spider" and "jellyfish," close, but not quite. I'm putting my money on the unholy biological alliance between "snakes" and "fish." Conisdering they're the subject of 2014 TV movie SnakeHead Swamp , you might be wonder if snakehead fish are real, or just some kind of nightmarish imagined creature. And, as it turns out, not only are snakehead fish real, they're also pretty scary — and not just for the reasons you'd imagine. First things first: this thing is pretty intimidating. It's got the long, slithery body and powerful jaws of a snake paired with the swimming, breathing, and living underwater part about fish.

Granted, the fish do not closely resemble what they were portrayed as in the TV movie. The modestly-sized and modestly-toothed snakehead fish may be powerfully strong, but they are not the pure nightmare fuel CGI monsters they look like in the film, particularly the ones located in the U.S. The Asian and African varieties of the fish can reach larger sizes, as demonstrated by this video of Thai fishermen attempting to subdue a snakehead in a drained pond. The fish is very strong and very fast, and if snakes, eels, or other slithery things give you the heebie-jeebies, watch with your eyes closed.

The Asian Snakehead Fish can reach over four feet long and nearly 50 pounds, according to FishBase. But, according to Virginia Tech, the average size of the northern snakehead fish is somewhere around eight or 10 pounds — though, it should be noted monitoring the physical and population size of the fish is difficult: not only is the snakehead fish a bit unnerving to look at, but it also has extremely far-reaching and negative consequences on its environment.

The snakehead fish is a non-native invasive species in the U.S., which means that in certain areas, it eats native species and puts a major strain on the area, as handily explained by the above National Geographic clip. And in the words of Virginia Tech:

Their release in a small ecosystem, particularly one with rare species and lacking a top piscivore, could be disastrous. Even in the Potomac River, the story is still being written. Invasive species can be viewed as a ticking time bomb, and changes in the ecosystem from habitat alterations, climate change, or from the introduction of additional non-native species can result in previously unexpected population explosions of existing invasive species.

It's not quite the same as torturing and eating tons of researchers in Louisiana the way the snakehead fish in SnakeHead Swamp do, but the actual, real creature that the B-movie's monster is based on has a very bad affect on its surroundings.

More like this
Michael & Kathleen Peterson’s House From ‘The Staircase’ Has New Owners
By Kadin Burnett and Kayla Blanton
My Picky Eater Dog Absolutely Devours This All-Natural Food
By Allison Berry
If You Have Pets, You Probably Don't Realize You're Making These Common Mistakes
By Mackenzie Edwards
25 Cheap Ways To Make Your Cat 5x Happier
By Claire Epting
Get Even More From Bustle — Sign Up For The Newsletter