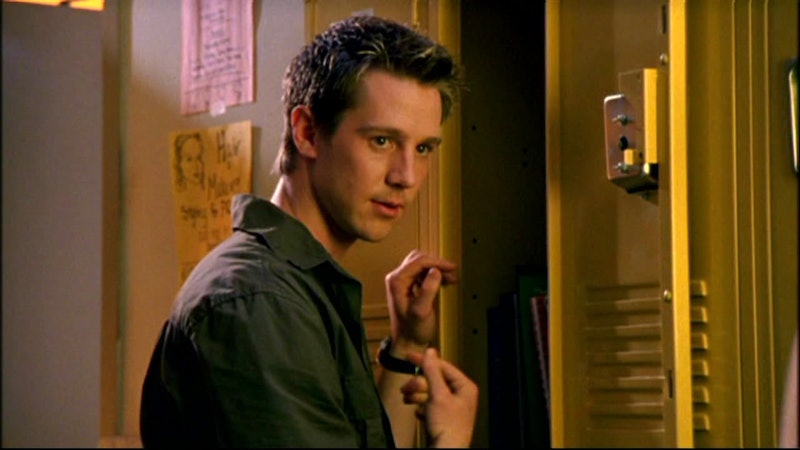 Since the hallowed beginning of TV time, there have been lovable narcissists who constantly seem to undergo the same battles time and time again but never seem to learn from their mistakes. They're destructive, they're selfish, they're entitled — in fact they are often the downright worst... and yet. There have been toxic male characters since television started (remember how horrible Darren from Bewitched was?), but there were high quantities of toxic men in early 2000s television shows. We always end up loving these protagonist and antagonists despite themselves and despite ourselves. Often they win us back with their pluck, charm, or wit, even if they shouldn't.

For tweens and teens using television as a standard to hold men to, the early 2000s was not an ideal time. If a character wasn't drinking himself into a destructive stupor, or lying irrevocably to the one they love, or not taking other people's feelings into account, they were doing something else completely indefensible (I'm looking at you Logan Echolls from Veronica Mars, with your malicious homeless person gladiator events).

At least we can use the following males as a role model for what not to do and who not to entangle with. Thanks television of the early '00s, good work.

1. Ted Mosby From How I Met Your Mother

Have you met Ted? Good. You don't want to. Ted dates some of the most beautiful and wonderful women and just spends his time constantly wanting something more. You're not perfect either, Ted. Now, take those red boots off, you look ridiculous.

Maybe Meredith Grey and McDreamy are soul mates, but that honestly doesn't make it OK that he pursued a relationship with an intern. It really feels like he could have waited, but his own selfish desires and aspirations to be praised and admired got in the way.

The elitism of Frasier's brother, Niles, is infuriating. Even more infuriating is the constant battle to be the best that he wages against his brother. His jealousy and mockery make him an incredibly toxic sibling to be stuck with. A high IQ doesn't always necessitate a great person.

4. Jimmy McNulty From The Wire

Technically, McNulty is one of the good guys, just trying his hardest to keep the streets of Baltimore safe. But when you remember the womanizing, alcoholism, and constant inability to pay child support, everyone is reminded of how much of a chump the guy can be.

Hey I'm a LoVe supporter all day everyday. But I still take into account the dark cloud that follows Logan and often overpowers him. This guy's terrible childhood and equally toxic parents really did a number on him — not many fathers are as bad as to sleep with then murder their children's girlfriend — and sometimes that same toxicity seems to flow through Logan.

The meteor that struck Smallville and made Lex bald also must have made him incredibly toxic. The guy's huge inferiority complex leads him to do a huge multitude of despicable things, often against some of his best friends. The guys definitely got a chip on his shoulder, but that doesn't mean he has to be evil.

Dean never takes responsibility for his own mistakes and instead chooses to blame everyone else around him — which is usually Rory. When things don't end well with Rory, he blames it on the fact that the Gilmore girls are too snooty for small-town boys. But really it was just because he was a huge jerk.

The on-and-off relationship of Mr. Big and Carrie Bradshaw is a testament to Mr. Big's toxic behavior. He never lets Carrie get close, always keeping her at arm's length, which, to an outsider's perspective, is pretty selfish. He then proceeds to pine after her and cheat on his wife with Carrie. Bad move, Big.

So I get that being toxic is Peter's whole shtick and is why the show is funny. But he still makes the list. Everything Peter touches combusts, and that's because he always follows his needs and rarely thinks about anyone else.

10. Spike From Buffy The Vampire Slayer

We can give Spike a little bit of credit, because at first he is literally evil and there's not much he can do about his murderous and lustful yearnings. But, in Season 6, when he tries to make Buffy feel isolated from her friends because she, too, is sort of undead just so she'll stay with him — well, that's just really messed up. You go a little too far, Spikey.

11. Dawson and Pacey From Dawson's Creek

This list item features both lead boys from the series. These two and their constant fight over Joey are a toxic mess of nonsense. They're supposed to be best friends, and instead they kind of become enemies over a girl — even though they often are in relationships with girls who aren't Joey. Is the fight even really about Joey to them or just proving their own manhood?

Infidelity much? This guy can't seem to care enough about his significant others to not cheat on them. That and his pretty consistent "oh poor me" attitude in relation to working with his brother at the family business make Fisher a very toxic television character to watch.

Everyone in the Bluth family has some serious issues, but I think we can agree that if the Bluth patriarch hadn't been such a selfish, greedy, and unfeeling parent/businessman, the rest of his family might have followed suit.

Chances are, you're not going to be the most well-adjusted character if your storyline starts with armed robbery and ends in a coma via gunshot. Ryan's older brother was always trying to bring his younger brother down with them. I get they had a tough childhood but, geez, at least let your brother have an OK life.

A lot of times, these characters and their exploits were a tad too much. And yet, we, and the other characters on their respective shows, kept coming back to our toxic males. There's something about a toxic male that leads to great television. As long as we leave those types of relationship for the TV screen, I see nothing wrong with it.