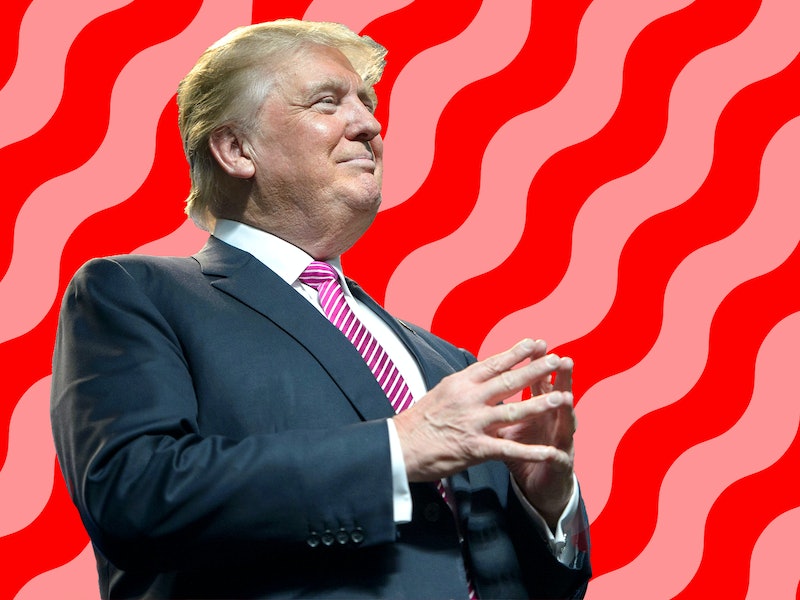 You guys: Politics, AMIRITE? Between the cribs, the snubs, and frankly pants-crapping outlook of last week’s Republican National Convention in Cleveland, and the sweltering, scrambling, and nightmare-polls-opening of the Democratic National Convention in Philadelphia, I just want to hide under the covers… preferably with a friend. Fortunately, Bustle came across Derek C., a political prophylactic purveyor who is in Philadelphia this week, selling condoms at the Democratic National Convention and making sure we all can safely enjoy congress in the city of brotherly love and sisterly affection.

“My sales pitch to start off is to yell at a guy and say, ‘Sir, we have extra large available,’” Derek tells Bustle. His two bestsellers? One features an unflattering drawing of GOP presidential nominee Donald Trump and the words “I’m HUUUGE!” — which is the extra-small size. The other features a smiling Bernie Sanders and the slogan “Feel the Bern.” (Which raises the question: Is he also selling lube?)

Derek didn’t start off in the 2016 campaign selling safe sex. “I used to work for the Bernie Sanders campaign, and then I got laid off when the election ended,” he explains. Of his new line of work, he says, “It’s funny, and it promotes safe sex.”

A favorite of the #GuessImWithHer crowd.

I'm confused... I personally find our current president to be one of the sexiest, and yet the coarseness of the pun is a bit chafing.

Yeah, the pictures of older smiling men on the condoms isn't really doing it, no matter their political positions.

Uh, except abstinence-only education. Maybe it should say "Great for any realistic position."

We have a lot of problems in America, but so far as I know, this is not one of them.

This slogan would also work for earplugs.

If you're not at the DNC, you can buy the condoms online at www.FunnyCondoms.com.

More like this
Here’s How To Deal With Sexual Frustration If You Don’t Want Casual Sex
By Annakeara Stinson and Mackenzie Sylvester
Here’s How To Reignite The Spark In A Sexless Relationship
By Vanessa Marin
How To Protect Your Digital Privacy If You Need An Abortion Post Roe v. Wade
By Kaitlyn Wylde
Starbucks' Summer Menu Includes A New Chocolate Cream Cold Brew
By Emma Garza
Get Even More From Bustle — Sign Up For The Newsletter